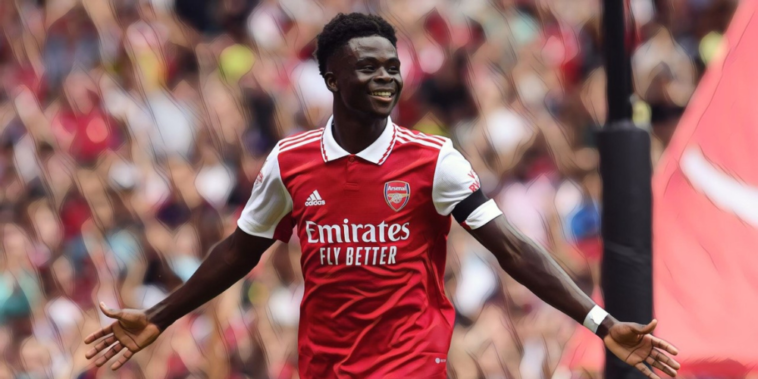 Last year proved a breakout campaign for several starlets and we’ve decided to look at the most productive u21 players across the calendar year.

Here are the u21 players with most goals & assists in Europe’s top five leagues in 2022.

Arsenal are reaping the rewards of their faith in young talent this season, with Mikel Arteta’s table-topping Gunners looking more and more like title contenders with each performance.

One of the stars of the north Londoner’s vibrant young team has been Gabriel Martinelli, who has overcome fitness issues to fulfil his huge potential. After an impressive end to the 2021/22 campaign, Martinelli began the new season with a bang and has been an impressive performer for Arsenal.

His seven Premier League goals are already more than the total he managed across the entirety of last season, while he has added a further two assists to make it nine goal contributions in 16 appearances.

The Brazilian recorded 14 goals and assists across 2022, while his combination of work-ethic, speed and end product has embodied a new-look Arsenal team increasing in confidence. Just four u21 players were directly involved in more goals across Europe’s top leagues last year.

Elye Wahi’s performances have placed the forward on the radar of top clubs, with the Montpellier youngster having had a breakthrough year in Ligue 1.

Wahi scored ten league goals in 2021/22 after breaking into the Montpellier side on a regular basis and has continued to fire during the current campaign, with seven goals to date.

19 years of age. One of the most prolific teenagers in Europe. pic.twitter.com/XykqbBIEbg

The forward recently became just the second player to score 20 Ligue 1 goals before their 20th birthday, with only Kylian Mbappe having previously achieved the feat.

Arsenal are among the clubs to have taken notice of Wahi’s emergence, though competition is expected to be fierce for a forward outshining his peers in French football.

Rodrygo is looking to follow in the footsteps of Vinicius Junior and explode in output at Real Madrid, with the forward beginning to post impressive numbers at the Bernabeu.

The 21-year-old played a prominent part in the club’s Champions League success last season and has built on those performances during the current campaign. He has eight goal involvements in just ten league starts for Carlo Ancelotti’s side, already matching his total from the 2021/22 La Liga season.

He’s added a further three goals in five Champions League appearances and has shone in a number of roles, operating as a false nine on occasion in Karim Benzema’s absence. With Vinicius Junior continuing to shine and the signing of Endrick secured for 2024, the Spanish side have a collection of brilliant Brazilian youngsters who can be the long-term future of the club.

Jamal Musiala was among the few Germany players to come out with credit from the nation’s embarrassing World Cup exit, underlining his status as one of the game’s most exciting talents in Qatar.

Musiala’s form at the tournament was the continuation of his excellence at Bayern Munich, having become an irreplaceable figure in Julian Nagelsmann’s plans.

Another year is in the books🔒
On the last days of 2022 it's time to say thank you again for all your great support throughout the year. I'll keep working hard to come back even stronger in the new year & win as much as possible with the team. Couldn't be more motivated 💯 pic.twitter.com/Z7jI5AN3Yd

The 19-year-old has 15 goal contributions (nine goals and six assists) in just 12 league starts this season, ranking fourth in the division for both goals and assists. It is a remarkable rate of production for the midfielder who started just 12 games across the whole of last season, with Musiala now a pivotal part of the Bundesliga champion’s XI.

Having already become Bayern Munich’s youngest ever goalscorer, Germany’s second-youngest goalscorer, and the youngest player to feature for Germany at a major tournament, the sky appears to be the limit for a talent firmly on the rise.

Bukayo Saka leads the way for u21 players in Europe’s top five leagues, having been involved in 20 league goals for Arsenal across the calendar year.

Saka has shone since emerging from the Gunners’ academy ranks and has elevated his game for club and country. This season the 21-year-old has been directly involved in 12 Premier League goals, a contribution which has helped Arsenal climb to the top of the division.

Saka’s 70 chances created in 2022 are a leading total among u21 players in Europe’s top divisions, dwarfing the totals of the next highest-placed players in Lens’ David Da Costa (52) and Nantes’ Quentin Merlin (47).

No player has scored more Premier League goals for Arsenal before the age of 21 than Bukayo Saka 🌟 pic.twitter.com/UG3z4qVkPz

After impressing during England’s World Cup campaign in Qatar, he has since returned to north London with the objective to keep Arsenal out in front of the chasing pack.

Arsenal are keen to tie Saka down to a new deal and recently activated a clause to extend the winger’s contract for an extra year, as talks continue over a long-term agreement. The future appears bright at the Emirates.