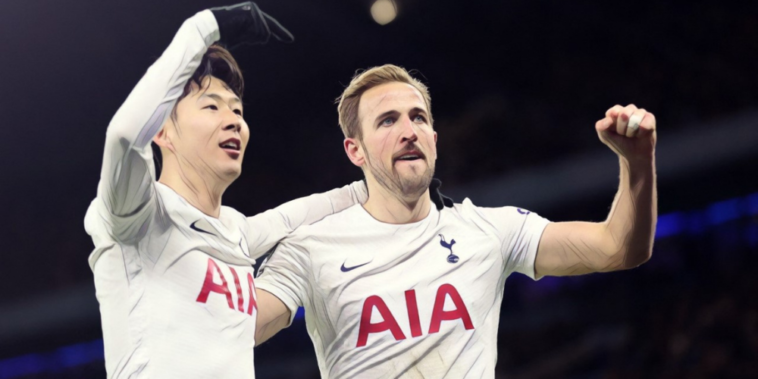 English football hosts some of the best creative talents in world football right now, a number of star names who excel in carving out chances with defence-splitting passes and pinpoint deliveries.

We’ve decided to look at those to have racked up the assist numbers across the past two campaigns, looking at the Premier League players with the most goals created since the start of the 2020/21 campaign.

Son Heung-Min enjoyed the most productive season of his Premier League career in 2020/21 and the South Korean has remained a shining light in a Spurs side struggling for consistent results this time around.

Son scored 17 goals and provided 10 assists in a career-best campaign last term, reaching double figures on both metrics for the first time since arriving in North London.

The 29-year-old is closing in on replicating that achievement this time around and ranks second in the Premier League for goals (13), whilst he has registered five assists for the campaign with his partnership with Harry Kane central to Spurs’ hopes of a top four finish.

Kevin De Bruyne remains one of the most prolific chance creators in world football, having rose to ninth in the English Premier League all-time assist chart since signing for Manchester City.

De Bruyne has reached 10+ assists in four different seasons for City, including a record-equalling 20 assists during the 2019/20 campaign.

Kevin De Bruyne for Man City in all competitions this season:

He has just three for the current season, though ranks third in the Premier League for expected assists per 90 minutes, having made just 17 league starts due to fitness issues.

Even given his injury absences across the past two campaigns, his 15 assists are enough to rank the midfielder joint 5th for Premier League assists since the start of the 2020/21 season.

Mohamed Salah is level with Son and De Bruyne on 15 assists, with 10 of those assists having come this season in a brilliant campaign for the Liverpool forward.

Salah leads the Premier League for goals (20) and ranks second for assists (10), the Egyptian’s 30 goal involvements in just 25 league starts having fired the Reds title challenge.

Only two players in Premier League history have reached 20 goals and 10 assists more than once:

Salah’s 10 assists this season equal the best hauls of his Liverpool career, having also reached 10 during the 2017/18 and 2019/20 seasons respectively. He has significant time remaining to set a new career best this season.

Andy Robertson is fast closing in on the Premier League’s assist record for a defender, with the Liverpool left-back now just four behind Leighton Baines’ all-time record of 53.

Robertson has produced 17 of his 49 assists in the Premier League since the start of last season, including 10 during the current campaign as the Scotland international and Trent Alexander-Arnold provide huge creativity from full-back for Jurgen Klopp’s side.

Robertson and Alexander-Arnold are now the first full-back pairing in Premier League history to record double figures for assists in three separate seasons.

Bruno Fernandes ranks =2nd in the Premier League for assists since the start of the 2020/21 campaign, despite a more challenging second full season at Manchester United.

Fernandes has largely been the Red Devils best player since arriving from Sporting Lisbon, setting a new single season goal record for a Premier League midfielder (28) in all competitions last season.

He reached double figures for goals (18) and assists (12) in the Premier League, though those numbers have dropped this season after his role was changed following the arrivals of Cristiano Ronaldo and Jadon Sancho at Old Trafford.

He has provided six assists in the Premier League this season, though ranks third in the division for expected assists (7.9). Fernandes is also the leading assist provider in the Champions League this season with seven.

Trent Alexander-Arnold is alongside Fernandes in second on this list, having provided 18 assists across the past two seasons.

The right-back has set the standard – not just among defenders, but the entire Premier League – this season and leads the assist charts on 11, whilst he also leads the metrics for expected assists and expected assists per 90 minutes.

Who will be @Castrol's Playmaker of the Season? 💫@TrentAA leads the way 👊 pic.twitter.com/I59UmHpnmH

Alexander-Arnold has now reached 10+ assists in three different seasons and needs three more to beat his own record for a defender in a single campaign, the 13 assists he provided in 2019/20.

The 23-year-old has a career-best 17 assists in all competitions this season and needs just four more to equal the highest ever by a defender in a single season – Dani Alves with 21.

Harry Kane leads the rankings for Premier League assists since the start of last season, with the England captain having evolved his game in recent campaigns.

Kane has developed into the complete centre-forward, equally at home dropping into the midfield and picking passes as he is lurking inside the area awaiting goalscoring opportunities.

Only Frank Lampard (24 to Didier Drogba) and David Silva (21 to Sergio Aguero) have assisted a single teammate more#TOTWHU pic.twitter.com/UAGKw624n4

Last season the 28-year-old became just the third player to finish as both the Premier League’s leading scorer (23) and assist provider (14) in the same season, earning both the Golden Boot and Playmaker Award.

Remarkably, 13 of Kane’s assists have come for Son Heung-Min with the devastating duo having eclipsed the Premier League’s all-time record – previously held by Frank Lampard and Didier Drogba – for goal combinations this season.