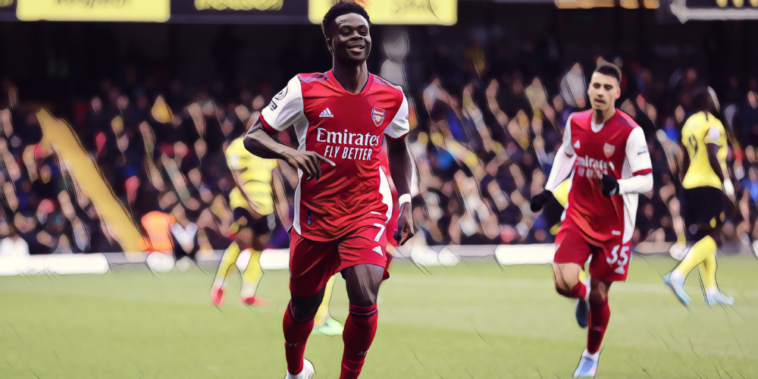 The Premier League is home to some wonderfully gifted young footballers at present, with a whole host of precocious prospects enjoying memorable campaigns.

Several sides are reaping the rewards of placing their faith in emerging stars, from academy graduates to rough diamonds picked up from rival clubs.

We’ve decided to look at the most productive Premier League players aged 21 or under this season, here are the five youngsters with the most goals and assists in 2021/22.

Crystal Palace’s capture of Michael Olise from Reading last summer has proven a shrewd move, securing an £8m deal for the winger after an impressive Championship campaign.

Olise was named as the Championship’s Young Player of the Season in 2020/21 after scoring seven goals and providing 12 assists for Reading, with Crystal Palace providing the 20-year-old with a chance at Premier League level this term.

Patrick Vieira has been patient with the winger, but he has impressed whenever called upon to provide seven goal involvements in just 904 minutes of action, averaging a goal or assist every 129 minutes.

Olise has added a further two goals in the FA Cup for the Eagles and is beginning to grow in influence at Selhurst Park. The future looks bright for Vieira, whose overhaul of the squad has provided Palace with an exciting core of emerging talent.

Gabriel Martinelli’s return has provided Mikel Arteta with another option in the Arsenal attack, with the forward having taken time to recover from a long-term knee problem that saw him miss much of last season.

Martinelli started the Gunners’ opening two fixtures of the season, but then found himself on the sidelines until returning to the starting side in December.

The 20-year-old’s absence allowed him to get up to speed and he went on a run of six goal involvements in six fixtures over the festive period, before adding another goal during last weekend’s 3-2 win at Watford.

Martinelli’s goal against the Hornets means Arsenal have now had three players aged 21 or under score 5+ league goals this season, becoming just the fourth Premier League team to achieve the feat after Manchester United (1995/96), Leeds (1998/99) and Chelsea (2019/20).

Phil Foden remains the most exciting young talent in English football, with the Manchester City forward having emerged as a key figure in Pep Guardiola’s plans.

Guardiola’s insistence that Foden’s development was best served under his watch has been proven right, the tutelage the 21-year-old has received at the Etihad having contributed to his rise to star status.

Foden has scored seven goals and provided three assists in the Premier League this season, whilst he has provided a further six goal contributions across European and cup competition.

Foden has excelled whether used as a false nine, out wide, or in a deeper midfield position and has averaged a goal involvement every 132 minutes across all competitions for City in 2021/22.

There are few footballers as easy on the eye as the affectionately nicknamed ‘Stockport Iniesta’, a talent whose trajectory seems set to take him into the elite.

Emile Smith Rowe has failed to look back since taking his chance in a Boxing Day win over Chelsea last season, the midfielder fast becoming a major part of Mikel Arteta’s plans at Arsenal.

Smith Rowe has elevated his game to new levels this season and has demonstrated an improving instinct around goal, scoring nine goals from just 15 league starts for the Gunners.

The 21-year-old has featured from the left and centrally this season, showcasing his composure when drifting forward into goalscoring positions.

⏪ Last time out against Watford…

His performances earned Smith Rowe a first England call-up in November and he netted his first senior goal for the Three Lions in a 10-0 win over San Marino.

Bukayo Saka leads the ranking for goal contributions among u21 players in the Premier League, having been directly involved in 13 league goals (8G, 5A) for Arsenal this season.

The 20-year-old has bounced back from his disappointment at Euro 2020 to enjoy the best season of his career so far, his 13 goal involvements already five more than he managed across the entirety of last season.

Saka’s contribution has been pivotal to an Arsenal side lacking a regular goalscorer at centre-forward, with only Smith Rowe having scored more Premier League goals for the Gunners.

The performances of the duo have seen Arsenal rise to fourth in the division at present and the north Londoners are in a strong position to secure a Champions League return this season.

Saka’s haul makes him the second most productive footballer aged 20 or under across Europe’s top five league this season, behind only Bayer Leverkusen’s Florian Wirtz (17).

Read Also – Key Men: Five players to watch out for in the Champions League this week