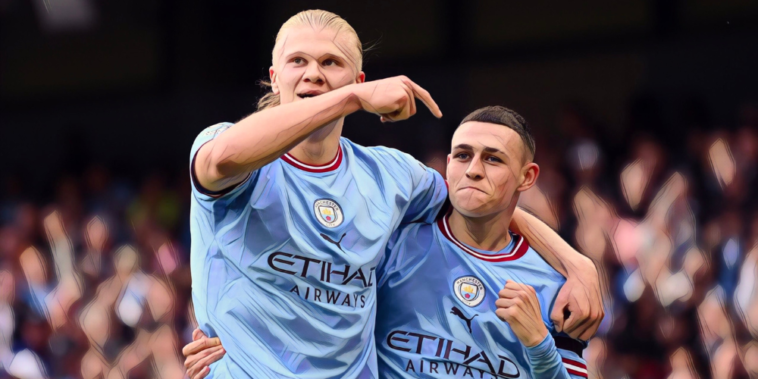 Some of the Premier League’s best attacking talent have enjoyed impressive starts to the season, with a number of names racking up the goals and assists in the season’s early weeks.

A certain Norwegian has made headline after headline in the colours of Manchester City and unsurprisingly ranks among the footballers with the least minutes between goal involvements this season.

Here are the five Premier League players with the best minutes per goal involvement this season (minimum 200 minutes played).

Kevin De Bruyne last week stated his belief that Phil Foden would develop into a central midfielder, though it’s difficult to move the Manchester City forward given his excellence in the final third.

Foden has provided seven goal involvements in the Premier League already this season, having averaged a goal or assist every 86 minutes for Pep Guardiola’s side.

The 22-year-old scored his first senior hat-trick last weekend and picked the perfect occasion to claim his maiden match ball, as he struck three times in a 6-3 thrashing of Manchester United at the Etihad.

Rodrigo began the new season in electric form for Leeds, with four goals in his first three Premier League appearances of the campaign.

The Spaniard shone in pre-season and continued that form into the league season, as Leeds began the campaign with seven points from their opening three games.

Rodrigo scored in clashes with Wolves, Southampton (2) and Chelsea, while he also provided an assist as Leeds thrashed the latter 3-0 at Elland Road.

The forward dislocated his shoulder during the draw with Everton in early September, but returned for the goalless draw with Aston Villa last week in a welcome boost to Jesse Marsch and his side. He has been directly involved in 50% of Leeds’ goals this season and averaged a goal or assist every 72 minutes.

Kevin De Bruyne has been in brilliant form for Manchester City across the season’s opening weeks, with the presence of Erling Haaland having provided a focal point for his creative talents.

De Bruyne has been involved in a goal every 68 minutes for City this season and leads the Premier League for assists with eight for the campaign – double the amount of the next highest players in Arsenal’s Bukayo Saka and teammate Bernardo Silva.

The 31-year-old’s eight assists have come in just seven starts and already matches his total from last season. The Premier League record for assists in a single season (20) is currently shared between De Bruyne and Thierry Henry. He will have his sights set on claiming it outright this season.

The summer arrival of Darwin Nunez seemed to indicate the end of Roberto Firmino’s time as a Liverpool regular, with the previous additions of Diogo Jota and Luis Diaz having already increased the competition for places in Jurgen Klopp’s front three.

Firmino has instead proven what he can still bring to the side. He has five goals and three assists in just six league appearances this season and is averaging a goal involvement every 53 minutes.

Five of Firmino’s eight goal involvements came in Liverpool’s 9-0 thrashing of Bournemouth. The Brazilian became just the third Liverpool player – after Luis Suarez and Mohamed Salah – to be involved in five goals in a Premier League game, as the Reds equalled the division’s biggest ever win.

He also scored twice in the 3-3 draw with Brighton last weekend and has been a bright spark in an otherwise dull start to the season at Anfield.

The numbers are truly extraordinary.

Erling Haaland has made the Premier League his own personal playground and is showing no signs of stopping, bludgeoning and steamrollering his way through the division’s defences.

It’s now 14 goals in just EIGHT games for the Norwegian, who has thrown in three assists for good measure. Only four teams have scored more goals than the forward this season, who was the star of the show during a Manchester derby destruction of Manchester United last time out, scoring a hat-trick and creating two others.

Erling Haaland is making a mockery of the Premier League 🤯 pic.twitter.com/2JIXcqTbhB

If Haaland were to maintain his current rate of scoring and feature in all 38 league games, he would reach 66 goals in the Premier League alone. It’s an absurd run of form he is on right now, with only Bournemouth having kept him off the scoresheet to date.

Expect records to be re-written and updated regularly as the season progresses on the early evidence of Haaland’s career at City.