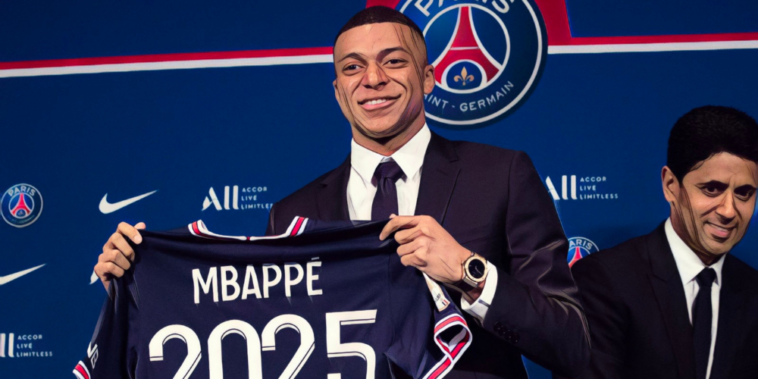 Mohamed Salah’s new deal at Liverpool has seen the forward join the sport’s highest-paid stars, signing terms on a club-record contract at Anfield.

The deal comes after another stellar season for the Egyptian, who was named as winner of the PFA Player of the Year and FWA Footballer of the Year for a second time in 2021/22.

Having been set to become a free agent next summer, Salah’s new deal is a major boost for Liverpool as the club look to challenge for major trophies again next season.

Cristiano Ronaldo and Kevin De Bruyne come in at joint-fifth among the world’s best paid footballers, with each reported to earn a weekly wage of £385,000.

The 37-year-old scored 24 goals in all competitions last season, though it proved a disappointing campaign for the club who finished sixth to miss out on Champions League football.

De Bruyne is the highest-paid player at Premier League champions Manchester City, having evolved into one of world football’s finest players at the Etihad.

The Belgium international won the PFA Player of the Year in consecutive campaigns in 2019/20 and 2020/21, whilst he has won City’s Player of the Season accolade on a joint-record four occasions.

Mohamed Salah’s new deal has reportedly made the 30-year-old the highest-paid player in the Premier League, signing terms on a three-year contract worth £400,000-a-week.

Salah has been a major part of Liverpool’s success in recent seasons, having scored 156 goals in 254 appearances for the Reds since arriving from Roma in 2017.

The forward has won the Premier League’s Golden Boot on three occasions, whilst the 2021/22 campaign saw him win the PFA Player of the Year and FWA Footballer of the Year double for a second time, having also achieved the feat in 2017/18.

There’s a significant jump from the Premier League’s highest earner to the game’s top three, with Neymar’s £606,000-a-week contract ranking him third.

The Brazil international’s world-record move to Paris Saint-Germain irreversibly altered the transfer market, both in terms of transfer fees and player salaries.

Neymar joined the Ligue 1 side for a fee of £198m from Barcelona, before signing a four-year contract extension in 2021. The 30-year-old has won 11 trophies at PSG, including four Ligue 1 titles.

Lionel Messi is the second-highest earning player in world football, despite having reportedly taken a pay-cut when leaving Barcelona for PSG last summer.

Messi is believed to earn around £960,000-a-week in the French capital, after PSG persuaded the Argentina captain to join the club on a free transfer.

The record seven-time Ballon d’Or winner won the Ligue 1 title during his debut season at the Parc des Princes, though managed just 11 goals for the season in all competitions, his lowest total since the 2005/06 campaign.

Kylian Mbappe overtook his teammate to become the highest-paid player in the game this summer, after turning down interest from Real Madrid to sign a new deal at Paris Saint-Germain.

PSG made the forward a record-breaking offer to commit his future to their project, with Mbappe – who was set to become a free agent this summer and was expected to move to Spain – putting pen to paper on a three-year extension.

Mbappe’s deal is believed to have contained a staggering €100m signing bonus alongside his world-leading wages, whilst he has also been handed a role in PSG’s wider decision-making as a club.

His influence has already aided the arrival of Luis Campos as sporting director, who Mbappe knows well following their time together at Monaco.