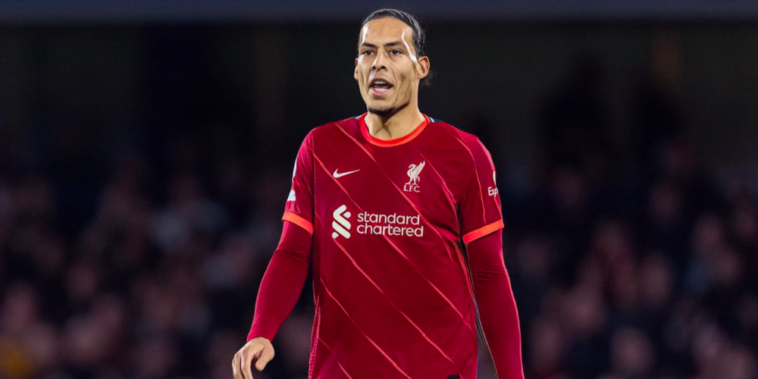 Successful sides are often built on brilliant backlines, with centre-backs the cornerstone of any team with ambitions of winning major trophies.

Modern football has evolved to a point where centre-backs are more complete than ever before, required to help build attacks and show confidence in possession alongside their primary focus in defending with determination.

The very best are capable of both starting and stopping attacks and we’ve decided to try and rank the finest central defenders in world football right now.

Chelsea’s loss will be Real Madrid’s gain this summer as Antonio Rudiger leaves Stamford Bridge for Spain, the defender having agreed a deal to sign for the La Liga champions on a free transfer.

It’s a huge coup for Real Madrid with Rudiger having emerged as one of Europe’s best centre-backs in recent seasons, starring during the West London side’s successes under Thomas Tuchel.

Four for the season for Rudiger. 🥅 pic.twitter.com/VC2A1onHv1

The Germany international is a ferocious competitor and has all the ingredients required for a modern centre-back, with his recovery speed crucial and his ability to step forward in possession breaking opposition lines.

Rudiger displays a visible delight when frustrating opposition forwards, a defender’s defender who is willing to win at all costs.

His presence in the Chelsea backline will be sorely missed when the new Premier League season kicks off in August.

Real Madrid’s free transfer signing of David Alaba was among the finest pieces of business of last summer’s transfer window, securing a move for the defender after he decided on a new challenge away from Bayern Munich.

Winner of 10 Bundesliga titles and two Champions League trophies in Germany, the 29-year-old has slotted seamlessly into the Real Madrid side and has helped fill the considerable void left by the departures of Sergio Ramos and Raphael Varane.

Alaba has been an influential figure on the team’s fortunes this season as Carlo Ancelotti’s side have won La Liga and reached the Champions League final, forming an excellent partnership with the improving Eder Militao at centre-back.

One of Europe’s finest centre-backs but a rare breed of footballer who is a world-class talent in multiple positions, the arrival of the aforementioned Rudiger could yet lead to a change in role for the Austria international next season.

Aymeric Laporte has been an integral part of the Premier League’s finest team in recent seasons, with the centre-back the perfect player to build attacks from deep in a Pep Guardiola side.

The Spain international leads the Premier League for pass accuracy (94.8%), passes into the final third and progressive carrying distance, with Manchester City boasting the division’s joint-best defence with only 24 goals conceded from 37 fixtures.

Confident and composed in possession, his left foot brings balance to Guardiola’s backline and he mixes the more cultured aspects of centre-back play with a willingness to put his body on the line when required.

Having been linked with an exit last summer, City will be glad the 27-year-old remained at the Etihad this season after regaining his place in the side and reestablishing himself as one of the world’s best central defenders.

Ruben Dias has partnered Laporte for much of the campaign at Manchester City and has built on a superb first season in England that ended with the FWA Footballer of the Year award in 2020/21.

Dias has emerged as the authoritative leader of the Premier League champion’s defence, adding security to a team whose attacking football has captivated audiences under Pep Guardiola’s management.

Manchester City’s record when he plays since he joined the club:

It is little coincidence that City have returned to the summit of English football and improved their Champions League record since Dias’ arrival, a defender who organises his defence and improves the performances of those around him.

Excellent in the air and on the ground, at 25 he looks set to be a cornerstone of the City side for seasons to come.

Liverpool’s signing of Virgil van Dijk was arguably the most transformative transfer of the Jurgen Klopp era, with the centre-back having since completed a clean sweep of major honours since moving to Anfield.

Van Dijk’s absence with a serious knee problem last season had a major impact on the Reds’ indifferent campaign, but he has barely missed a beat since returning to the team in 2021/22.

The Netherlands international is a complete centre-back, dominant in the air and possessing the athleticism to match even the quickest of opponents.

What a time to be a Red! 🕺🏽 pic.twitter.com/Puy8DKoVg5

A commanding presence and fine footballer when in possession, his long passes out to the flanks are a major part of Liverpool’s weaponry and the club’s record with him in the side is something special.

Van Dijk has never lost a Premier League fixture at Anfield as a Liverpool player, more than four years after his big-money arrival from Southampton.