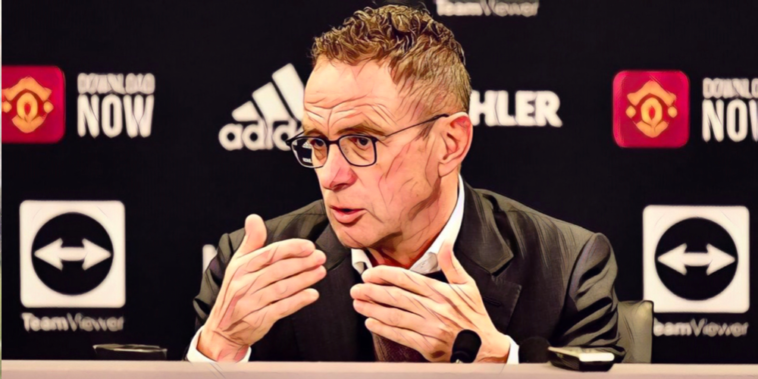 Ralf Rangnick has addressed the media for the first time following his appointment as Manchester United’s interim manager.

Rangnick will take charge of the side for the first time during this weekend’s clash with Crystal Palace at Old Trafford, with the German named as Ole Gunnar Solskjaer’s successor on an interim basis until the end of the season.

The 63-year-old – who watched Thursday’s 3-2 win over Arsenal from the stands and will move into a consultatory role at the end of the campaign – has discussed his vision for the Red Devils, outlining his determination to create a team that can ‘control’ games.

“I think to gain control on games in the future it has to do with playing proactively,” Rangnick told a press conference.

“It is about helping the team play together. It is about togetherness, team spirit – the two halves yesterday were completely different and having these unique fans behind us will help us. It is not easy, I cannot do it in a few training sessions. It’s about control – this is the major target.”

Rangnick admitted that it will take time for his methods to come to fruition, insisting his side must take each game ‘step by step’ as the Red Devils look to improve and challenge the Premier League’s leading sides.

“It can only go game by game, step by step. You have to make sure you have the biggest chance to win the next game then step by step. Let the players follow and buy into the idea that I can offer them on how we want to play in the future.

“Pep [Guardiola] has been at City for five years, Jurgen [Klopp] for six, Thomas [Tuchel] only came in February, but in time-wise, they’re a little ahead of us in the way they want to develop.

“I’m more than happy with the players we have here.”

Rangnick’s arrival has raised questions over Cristiano Ronaldo’s role in the side, with the German coach famed for his preference for high-intensity pressing football.

The former Schalke and RB Leipzig coach says that part of his role is adapting to the players at his disposal, but says he has ‘never seen anyone as fit at 36’ when discussing Ronaldo.

“You always have to adapt to the players you have available,” the German said.

“I have never seen anyone as fit at 36. But it’s not just about him, it’s about developing the squad as a whole.”

United announced the departure of Michael Carrick following the win over Arsenal, the former assistant having overseen the past three fixtures as caretaker manager.

The 40-year-old had been a part of Ole Gunnar Solskjaer’s coaching set-up at Old Trafford in recent seasons and Rangnick has revealed that he tried to convince Carrick to remain with the club.

“I met with Michael two days ago and had a long private conversation with him for more than an hour to try and persuade him to stay on board. In the end I had to accept his decision and I understand it.

“I am more than happy to work with the current staff because I need their expertise on the current squad. I will maybe try to find a few people. Many of my long-term colleagues are in contracts with big clubs so are not available.”