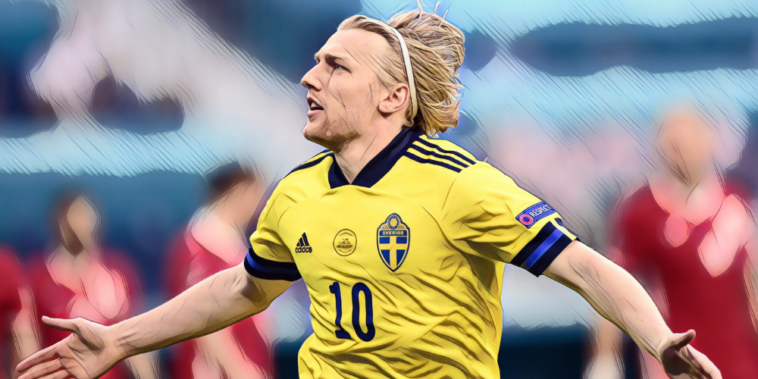 Starting quickly can often be the difference for sides and Euro 2020 has already seen several teams start in quick-fire fashion, both Denmark and Sweden having opened the scoring within the very first minutes of clashes at this summer’s finals.

Emil Forsberg’s second-minute goal for Sweden against Poland was the fastest scored at this summer’s tournament, but where does it rank amongst the quickest goals ever scored at the European Championship.

Here are the five fastest goals in Euro’s history.

Ireland were drawn to face France in a daunting last-16 clash against the host nation at Euro 2016, though were handed a dream opportunity to take the lead after being awarded a penalty inside the opening seconds.

Paul Pogba bundled over Shane Long inside the box, allowing Robbie Brady to step up and send Hugo Lloris the wrong way from the spot as Ireland threatened to cause an upset.

Despite a valiant effort it proved too long to hold on to their lead however, as Antoine Griezmann’s double sealed a comeback win and sent the eventual runners-up through to the quarter-finals.

Robert Lewandowski got Poland off to a perfect start in their quarter-final clash against Portugal in 2016, steering home Kamil Grosicki’s cross to open the scoring after just 100 seconds.

Lewandowski had gone goalless in his four previous appearances, but finally broke his duck after being afforded far too much room by the Portuguese defence.

Lewandowski’s intervention was not quite enough to see Poland into the semi-finals however, Renato Sanches’ goal forcing extra-time and penalties, with Portugal – who would go on to win the trophy – winning 5-3 in the shoot-out.

Yussuf Poulsen’s goal for Denmark at this summer’s tournament is the third-fastest in Euros history, the forward firing home against Belgium after just 1 minute and 38 seconds.

Like each of the early goalscorers already mentioned, Poulsen’s side were unable to hold on to their advantage as substitute Kevin De Bruyne inspired a turnaround for Belgium.

Perhaps you can score too early.

Forsberg’s early intervention against Poland is the second-fastest goal ever scored at a European Championship, as Sweden began their final fixture of the group in rapid fashion to open the scoring.

Forsberg scored twice as Sweden raced into a two-goal lead in what proved to be a thriller, before Robert Lewandowski netted a brace of his own to bring Poland back level.

It took him just 81 seconds to open the scoring. pic.twitter.com/tRUbZOCygg

As their opponents pushed forward in search of the winner they needed for qualification, Viktor Claesson scored on the counter to seal a dramatic 3-2 win and secure top spot in the group for Sweden.

Dmitri Kirichenko holds the record for the fastest ever goal, after opening the scoring for Russia against Greece at the 2004 finals.

Greece had been the surprise package of the tournament but found themselves behind after just 67 seconds to the Russians in their third group fixture, Kirichenko capitalising on a mistake to fire home.

Dmitri Bulykin scored a second for Russia who secured a 2-1 win, though Greece progressed through despite defeat before causing a seismic shock.

Otto Rehhagel’s side – who had never previously won a fixture at a major tournament – progressed all the way to the final, beating host nation Portugal to become shock champions of Europe.