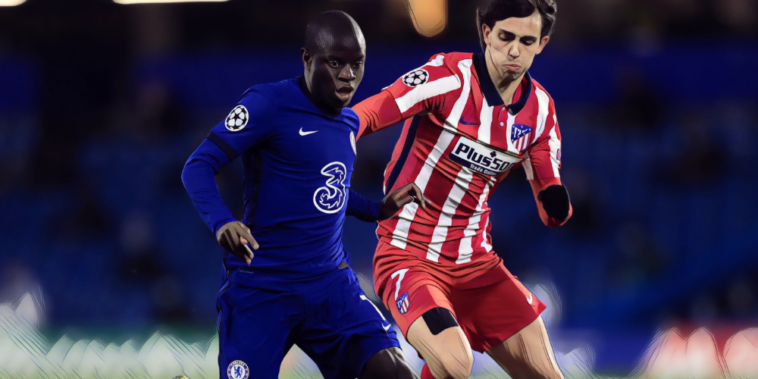 Chelsea booked their place in the quarter-finals of the Champions League with a second leg victory over the Spanish league leaders, securing a 3-0 win on aggregate to move into the last eight for the first time in seven years.

The west London side rarely looked troubled after Hakim Ziyech opened the scoring to double their aggregate advantage, with Emerson’s stoppage-time goal sealing the win against an Atletico side who finished with 10 men following Stefan Savic’s dismissal eight minutes from time.

Chelsea remain unbeaten in 13 games across all competitions under Thomas Tuchel and recorded their 11th clean sheet during that time, with former Blues midfielder Cole full of praise for Kante as the club’s defensive midfield screen.

“He has missed a lot of football, but he has had a good run at it now and he has built his fitness and match stamina up that you need.

“He just looks so comfortable. I think he likes having Kovacic in there as well, because I think it takes the burden off him, and they both get about the pitch.

“He was sensational. Not only does he have the physical capabilities, but he has got that canny ability to be in right place at right time and players don’t get round him.

A big performance on a big night. 💪 pic.twitter.com/YO0tkkRGbT

“He’s like having two men in there in one. He decides when he takes it, he blocks lines and then still has the energy to keep starting attacks and break forward in the 90th minute as well, he was fantastic and he’s back to his best.

“He is underestimated for his technical ability, he dribbles and he can pass, he is fantastic.”

Ferdinand echoed the praise of his fellow pundit and believes Kante is now back to his very best, describing the France international as a ‘magnet to the ball’ and admitting the 29-year-old was ‘a joy to watch’ following an all-action display against Atletico.

“He is like a magnet to the ball,” Ferdinand added.

“He looks like the Kante who played for Leicester in the year they won the league again in the last few weeks.

“What I like about him is that he is doing both sides of the game now, he is winning the ball. Like I said he is a magnet to the ball in defensive situations.

“But when there’s a turnover and a transition, and that last goal sums it up perfectly, he can get up and beyond things.

“He has got the capabilities to turn defence into attack. He was a joy to watch today on both sides of the game.”