There was a fairytale debut on Saturday for David Martin, who took the place of Roberto for West Ham’s 1-0 win over Chelsea. It was extra special for the 33-year-old, who probably thought this day would never come. The goalkeeper has been playing so long that he was on the books at Wimbledon FC before it moved to Milton Keynes, and was even on the books at Liverpool for a time.

Martin’s father Alvin is also a club legend, and at the final whistle they had an emotional embrace in the stands at Stamford Bridge.

David Martin hugging his dad @alvinmartin58 in the press box after the match.

What a moment ❤️ pic.twitter.com/eu3gcnK9GL

The Romford goalie isn’t even the oldest debutant in the top flight this season, though. That distinction belongs to Sheffield United’s Leon Clarke, who debuted aged 34 against Liverpool in September.

Another week, another Tottenham Hotspur win under Jose Mourinho, another two goals conceded, and another Dele Alli masterclass.

Dele Alli has now been directly involved in 75 Premier League goals for Spurs:

The revival under Jose continues. pic.twitter.com/2fYSMtcRYc

On top of his two goals, no other player had more shots on target (3), only one player took more than his five shots on goal, and he had the highest number of expected goals (1.42 xG) in gameweek 14. He also had an impressive nine touches in the opposition box, illustrating just how effective his change in position has been since Mourinho became Spurs boss.

Anyone else see flashes of Tony Yeboah in this Kevin De Bruyne strike?

History is not on Man City’s side this season

Toby Alderweireld hit two identical long-range passes from within his own half that resulted in goals during Spurs’ win over Bournemouth. The first one reached Heung-min Son, whose delicate touch set up Dele Alli to make it 1-0. The Belgian repeated the trick in the second-half, this time finding Alli directly to make it 2-0.

Both passes were sumptuous, but something tells me that Jose Mourinho knew the Cherries weren’t going to press the home side up high, thus giving Alderweireld plenty of time to find his targets.

Mourinho is playing many of the Pochettino greatest hits – Alli up next to Kane, Dier holding, Alderweireld raking balls forward – plus a few tweaks.

Arsenal goalkeeper Bernd Leno made a terrific fingertip save to deny Kenny McLean during the 2-2 draw with Norwich City at Carrow Road.

McLean gets clean through on goal and looks certain to score… but Bernd makes a superb fingertip stop!

The German netminder has made more saves (56) than any other goalkeeper this season.

Liverpool, titans of the marginal victory.

Liverpool already on seven 2-1 wins this season. The PL record is 10 by Arsenal 'Invincible but by narrow margins' Football Club in 2003-04.https://t.co/6gSwj7Azaz

Alisson Becker is one lucky boy that Liverpool closed out their match against Brighton with a 2-1 win. The Brazilian’s blatant handball was deserving of a red card, and the resulting free-kick ended up in a Lewis Dunk goal.

This is the look of someone who knows he’s just made a huge mistake: 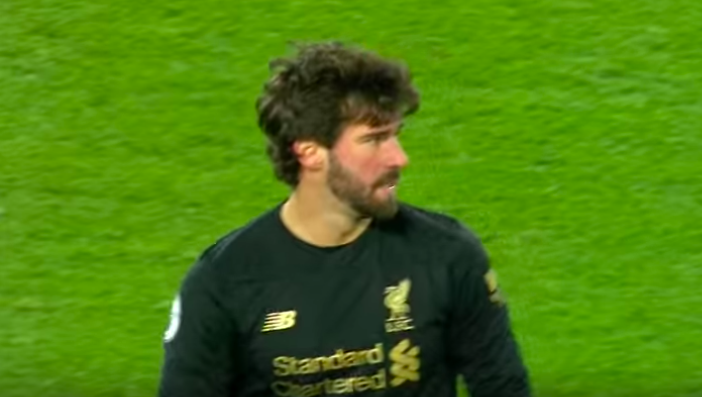 Death, taxes, and Ed Woodward being an utter donkey: the only guarantees in life. This week Manchester United’s executive vice-chairman wrote about the club’s vision for the future in last week’s match programme, and it only made things worse.

Woodward attempted to explain away the summer’s insufficient transfers, and the inexplicable contract renewals of players such as Phil Jones, by saying it was part of “a multi-year squad evolution analysis.” Exactly the kind of meaningless corporate jargon that makes one want to crack open the heads of every executive and feast on the goo inside.

“It’s hard enough to get three players done in a transfer window,” the investment banker said. “To get six or seven done is extremely difficult if you are getting proper talent.

“If you choose to churn every player because they are not good enough and you’re not extending contracts, you are putting yourself at risk of execution. Sometimes you have to take a broader view.”

Execution?! Be careful you don’t give people ideas there, Ed, because a lot of United fans are ready to wheel the guillotine out any day now.