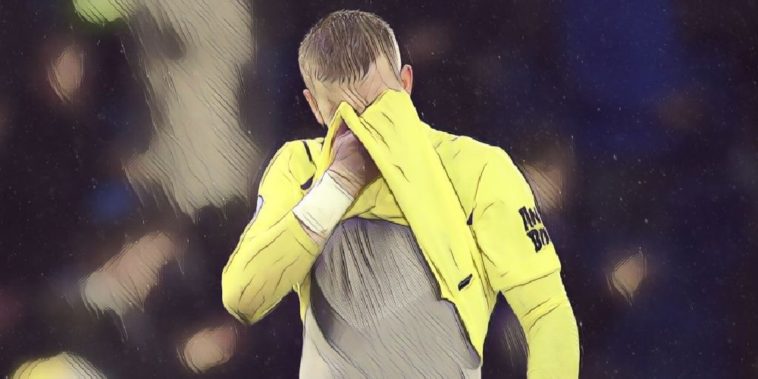 With an average of almost four goals in each Premier League fixture, it’s certainly been an entertaining weekend of top-flight football.

As with every story, there is always a hero, and with the heroes inevitably comes the villains, and this weekends Premier League story was certainly no different. Here are The Football Faithful‘s heroes and villains for gameweek 10 of the 2019/20 campaign.

2019 has certainly been Jamie Vardy’s year. Claude Puel went, Brendan came in, and the goals are flowing in like it’s 2015/16 all over again, it’s been pretty sweet, to say the least.

Friday night at St Mary’s was yet another red-letter day for the former Fleetwood Town striker. A tidy hat-trick, albeit against a near non-existent Southampton defence, took Vardy to 21 goals this calendar year and puts him in some pretty esteemed company.

In fact, he’s now only two off Lionel Messi’s goal tally this year which is a pretty mental stat altogether.

Come on now lads, 9-0, at home, really? Okay, they were down to ten men after just 12 minutes, but they could have at least tried to put some semblance of a stubborn defence to stop a few of the goals going in.

Leicester players were virtually walking through unmarked at times as the home side collectively downed tools and did a Watford.

Ralph Hasenhuttl may as well have picked five or six of the remaining 50 or so Southampton fans who bothered to stay and watch, to come on in the second half as his players well and truly bottled it and recorded their worst ever defeat in the history of the football club.

Truly woeful stuff, but it’s ok, their next two fixtures are both against Manchester City.

The 26-year-old Spaniard opened his account for the Foxes and duly romped to a hat-trick against the aforementioned sorry Southampton. Perez was a shrewd acquisition and looks at home in the Leicester forward line.

He’s unlikely to play in an easier game though, but he was excellent at St Mary’s and looks a pretty handy strike partner for the electric and in-from Jamie Vardy.

Ayoze Perez has now scored 50 goals in all competitions in English football.

The half-century has been achieved. pic.twitter.com/15vDMihqos

England’s number one endured a bit of a nightmare at the Amex during Everton‘s 3-2 loss. Pickford is a decent shot stopper so it’s a mystery that he somehow allowed Pascal Groß’s free kick to fly past him for the opening goal on Saturday afternoon.

At first glance, it looked a powerful, well-struck effort. On second glance though, well it’s probably best if Evertonians don’t watch the replay below. Pickford somehow let the shot straight through him rather than making what should have been a routine save.

He looked decidedly dodgy for the rest of the match and his volleyball style punching was just bizarre to watch.

Okay, so one the brightest young talents to emerge from the continent in recent years has just announced himself for Chelsea with a brilliant, ‘perfect’ hat-trick. The only downside to this, however, is everyone now using “Captain America” puns. Yes, we get it he’s American and comic book movies are a big thing right now, but still, it’s a bit cringe. See…

That aside though, Pulisic looked excellent for Chelsea against Burnley. His instincts to be in the right places at the right time were particularly impressive for a lad who has not always been a frequent goal-scorer so far in his career.

With Lampard’s attack-minded mentality, the young attacker could thrive in such an exciting and vibrant young team.

Brain fart of the weekend goes to Serge Aurier for the most clear-cut penalty you’re likely to see. The Ivorian hung out a clumsy leg to trip Sadio Mane in the box after he lost a foot race with the Senegalese winger in front of the Kop.

Going into a crucial final 15 minutes, Spurs needed their defence to be watertight, but Aurier never looked comfortable with Mane and his trip proved to be very costly indeed, Mo Salah converting the crucial spot-kick for Liverpool.

The full-back had Mane with his back to goal and men flooding back to help contain the danger. You’d expect far more composure from an experienced defender in that situation.