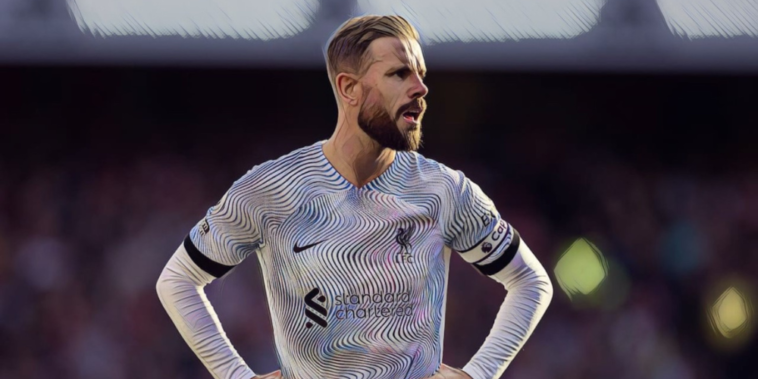 Is this just a period of bad form for Liverpool? Or is this something more serious and the start of real decline?

Liverpool’s season has shown few signs of igniting with defeat at Arsenal leaving the Reds marooned in tenth, a run of just two wins from eight games creating a 14-point gap from Jurgen Klopp’s side to the league leaders.

Just a matter of months ago there was talk of an unprecedented quadruple, but the current version of Liverpool look a long way from those heights. Against Arsenal the Reds were outran and overwhelmed, cut apart on occasion, and a team who looked a shadow of their former selves.

Game over for Liverpool ❌ pic.twitter.com/AxdvHcFFpU

It was the Gunners who more closely resembled a Klopp team, full of hard-pressing as Gabriel Martinelli and Bukayo Saka buzzed, brimming with energy, endeavour and attacking zip. The average age of the Liverpool starting XI was 28, with five players aged over 30. Arsenal’s, just 24. For long periods it appeared an even larger gap. Time waits for no one, not even a team as good as this.

Liverpool do not need a drastic rebuild, but a refresh is most certainly required. Klopp demands high intensity with the best football of his tenure having seen his side swarm opposition, a blur of red shirts around opponents with little time to breathe. There was none of that at the Emirates and hasn’t been for much of this season. The next two transfer windows appear crucial at Anfield.

What a turnaround it’s been at Bournemouth. There were many who criticised the sacking of Scott Parker just weeks into the new campaign, but the Cherries have been a team transformed under the management of interim boss Gary O’Neill.

It’s now five unbeaten for Bournemouth who rose to eighth in the table with a 2-1 win over Leicester, as O’Neill’s side came from behind in a spirited performance at the Vitality Stadium. The impending takeover of the club makes the next managerial appointment uncertain, but the new owners would appear foolish to overlook the credentials of the current man in charge.

The 39-year-old has galvanised a struggling squad on the South Coast, having taken over a team at rock bottom after a 9-0 loss to Liverpool at Anfield. Five games later, the Cherries are above Jurgen Klopp’s side in the table.

9 – Since losing 9-0 against Liverpool on MD4, Bournemouth have earned nine points, with only Manchester City (13), Arsenal (12) and Spurs (10) surpassing that total since the start of MD5. Liverpool have picked up only five points over the same period. Fortunes. pic.twitter.com/sd2LSlbCRC

O’Neill has stabilised the side and brought the best from its key components. Ryan Christie and Phillip Billing were excellent against Leicester, while Dominic Solanke has looked every inch a Premier League player on his return to the division. There’s a long way to go to secure survival, but with clashes with Fulham (A) and Southampton (H) in their next two, the pre-season relegation favourites have a chance to build on their form.

Frank Lampard and Erik ten Hag led the tributes to Cristiano Ronaldo, after the forward became the first footballer to score 700 goals in club football.

“It is outstanding,” Everton manager Lampard said after Ronaldo’s goal condemned his side to defeat.

“He is one of the greatest players to have graced the game and in an era when we have had him and Messi. The comparisons between them doesn’t matter.

“They are both incredible players in football history. The numbers they have racked up are abnormal numbers that have become normal. When he was on 699, I wanted him to score in the Europa League the other night. But in the cold light of day you have to give him credit. It is amazing.”

Ronaldo came off the bench to score the winner as Manchester United won 2-1 at Everton, putting a difficult start to the season behind him with a moment of game-changing class. The 37-year-old has not started a league fixture since the defeat to Brentford in August, with the fall-out from his desire to leave the Red Devils having contributed to a spell on the sidelines.

He provided a timely reminder of his quality at Everton, as he came on for the injured Anthony Martial and made his mark with some superb link-play and a crisp finish inside Jordan Pickford’s near post. Ten Hag talked about the prospect of more goals for Ronaldo this season and his winner this weekend – his first in the Premier League in 2022/23 – could kickstart his campaign.

Is it time to discuss Kevin De Bruyne as the best Premier League midfielder of all time?

The Belgium international’s credentials grow with each season and he climbed further towards immortality with another assist in Manchester City’s 4-0 win over Southampton.

De Bruyne is now fifth among the all-time goal creators in the Premier League, having climbed above James Milner, Steven Gerrard, David Silva and Dennis Bergkamp for assists since the start of the season alone.

He is just short of half-way to the single season assist record he shares with Thierry Henry (20), having registered an incredible nine assists in just eight league starts so far this season.

Comparisons between generations are difficult but, as the outstanding talent in a Manchester City team many regard as the finest the Premier League has seen, his claim as the division’s best ever midfielder has weight behind it.

Add in four league titles, back-to-back PFA Player of the Year awards, and a rate of assist productivity no all-time great can match and it’s a case worth discussion.

Tomiyasu the man for shut-down role

Takehiro Tomiyasu has had to be patient for his chance at Arsenal this season, with the defender having watched on as Mikel Arteta has largely stuck with an unchanged winning team.

The Japan international earned his surprise chance against Liverpool this weekend, included in the starting side for the first time this season. Having featured predominantly at right-back for the Gunners, he was chosen ahead of Kieran Tierney at left-back and tasked with shutting down Mohamed Salah.

It was a role in which he excelled.

Salah was an anonymous presence for much of the contest, kept on the periphery of the game as Tomiyasu thrived in his shut-down role on the Egyptian.

On his first start in the Premier League since May 16, the 23-year-old won the most ground duels (7), most aerial duels (4), most tackles (2), had the most ball recoveries (7) as Arsenal secured a statement 3-2 win at the Emirates.

Few players have shackled Salah into an early substitution quite like Tomiyasu, with Jurgen Klopp withdrawing his talisman after an ineffective showing.