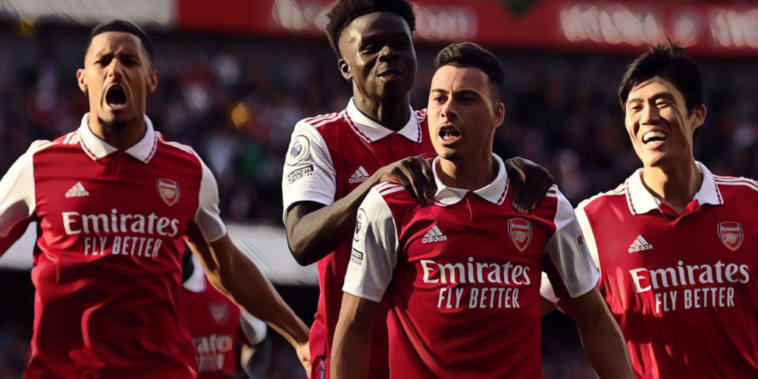 Just how good are Arsenal? It was a question being widely asked heading into this weekend’s fixtures.

The Gunners have been fantastic so far this season and lead the Premier League table after a near flawless campaign, but this weekend represented a real acid test for Mikel Arteta and his fast-improving team.

Defeat at Manchester United had been a blot on the club’s copybook when it comes to top-six clashes, before victory over Spurs last week proved the Gunners’ big-game mettle. Liverpool – despite a difficult start to the season – arrived at the Emirates this weekend dubbed as a true acid test for Arsenal and it is one the north Londoners passed in impressive fashion.

Arsenal led at the break despite being second-best across the first half, with incisive and clinical moments – led by the brilliant Gabriel Martinelli – handing the home side the advantage. Arteta’s youthful team rose their level in the second period and edged a 3-2 win in a statement result that moved Arsenal back to the top of the Premier League.

At times their football was reminiscent of Arsene Wenger’s slickest sides but with a bustling press and intensity that has been the trademark of dominant teams in the modern era. The endeavour and energy of Martinelli and Bukayo Saka was the sort of relentless running that was once the minimum expected of their beaten opponents.

Have the Gunners now replaced Liverpool as the closest contenders to Manchester City’s crown?

Rewind three years and Jurgen Klopp was lavishing praise on Gabriel Martinelli, with the Liverpool boss more than impressed with a teenager he described as ‘the talent of the century’.

That statement might have been hyperbole, but Klopp’s prophecy that Martinelli would develop into a game-changer has been fulfilled. The German will have watched on with despair as Martinelli tore Liverpool apart at the Emirates this weekend, with the Brazilian’s bustle running the Reds ragged.

Jurgen Klopp did warn everyone about Martinelli 👀 pic.twitter.com/g6AD8ov4kg

Neither Trent Alexander-Arnold – substituted at half-time after a collision but tormented time and time again over the opening exchanges – or Joe Gomez could live with the 21-year-old, who is electric at his best and surged into space with exceptional off-the-ball movement. He took just 58 seconds to open the scoring after darting in behind the visitor’s defence and turned provider after leading an Arsenal counter-attack just before the break.

There’s a fizz about Martinelli’s movement with everything done at both high speed and high quality. His long-term admirer might just wish he had Martinelli among his own ranks, as the livewire made Liverpool look leggy in north London.

If at first you don’t succeed, try, try, and try again.

Gianluca Scamacca took on that mantra this weekend as the Italian put behind him a number of squandered chances to earn West Ham all three points against Fulham.

The summer signing is growing in confidence and sharpness around goal and took his total to six in just seven starts across all competitions with a wonderful lifted finish over Bernd Leno. It was an encouraging combination as Lucas Paquetá – who teed up Scamacca’s winner in Europe in midweek – clipped a pass into the 23-year-old’s path, with the touch and finish perfect to restore the Hammers’ lead.

Hey Siri, show me what a beautiful goal looks like 😍 pic.twitter.com/4P4MArJZlZ

It’s been a slow start for West Ham this season, but that duo are beginning to find their groove and have added real quality to the top end of the pitch.

Another Premier League weekend, another goal for Erling Haaland.

It’s now 15 league goals for the campaign for Haaland and a staggering ten in just five games at the Etihad. Incredibly, that’s more than the entire Manchester City squad managed on home soil during the 2006/07 campaign.

10 – In five appearances this season, Erling Haaland has scored as many Premier League goals at the Etihad as the entire Manchester City squad during the 2006-07 campaign (10). Frightening. pic.twitter.com/D4EqigbTty

Pep Guardiola was less than impressed with the comments of Ilkay Gundogan’s wife this week, who criticised the quality of food in Manchester.

Sara Arfaoui claimed she couldn’t find a good place to eat in the entire city, despite Gundogan’s club manager owning his own tapas restaurant.

🗣 "Gundo is not going to play one more minute for the rest of the season." 🤣

Pep Guardiola's response to Ilkay Gundogan's wife complaining about the food in Manchester when he owns a restaurant in the city pic.twitter.com/n1aBcGTPSg

Brentford have done plenty right since stepping up to the Premier League, but their performance at Newcastle was one Thomas Frank will want to forget.

The Dane was furious with his side’s showing as the Bees lost 5-1 at St James’ Park, with individual errors behind a collapse. Brentford gifted Newcastle at least three of their five goals with Ethan Pinnock enduring a nightmare performance.

The centre-back produced a shambolic back-pass to set Miguel Almiron through on goal for the fourth, before clumsily turning Joelinton’s cross past David Raya for an own goal. There was more than a little rust from Pinnock, on his first appearance of the season.