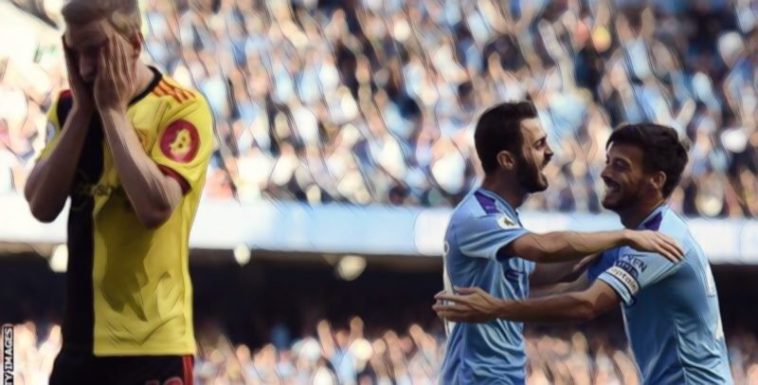 We are only six weeks into the new season but it already feels like the Premier League has never been away. The table is starting to shape up nicely after another bumper weekend of football.

Any lingering nerves for Man City fans following their shock 3-2 defeat to Norwich last weekend were duly calmed just 51 seconds into Saturday’s clash with Watford as David Silva gave them a very early lead. Those nerves were obliterated over the next 17 mins as Sergio Aguero, Riyad Mahrez, Bernardo Silva and Nicolas Otamendi all scored to help sink a hapless Watford side.

The visitors looked like the proverbial rabbit in the headlights after a ruthless footballing display from the champions left them staring down the barrel of a humiliating result.

The talk going into this game was of City’s defensive crisis, with John Stones joining Aymeric Laporte on the treatment table. However, this proved to be a statement win for Pep Guardiola’s men. Their attacking power was unharnessed and the Hornets were demolished with virtually every foray forward made by the champions.

On this evidence, City’s world-class firepower will comfortable see them through their defensive problems.

52 – David Silva's opener versus Watford after 52 seconds is the fastest goal scored in the Premier League this season. Lightning. pic.twitter.com/sNb3OPKOU9

A chorus of boos from the Goodison Park faithful greeted the referee’s full-time whistle as Everton sank to a dismal home defeat to recently promoted Sheffield United. Take nothing away from Chris Wilder’s men, they were superb on the day, but Everton gifted them two very soft goals as they yielded three points.

For the fifth game in a row, Marco Silva’s men conceded two goals, while they continue to look vulnerable from set-pieces. Jordan Pickford’s unconvincing attempt to punch a corner clear left Yerry Mina unable to do anything as he inadvertently nodded the ball into his own net.

The Columbia international also failed to cut out John Lundstam’s raking through ball as the visitors doubled their lead late on in the second half. 50 games into his career at Everton manager and the Toffees’ progress continue to stall under the Portuguese.

Teams to win at Goodison Park this year:

Saturday’s early kick-off may have been marred by yet more controversial VAR calls, but to focus on the football, Brendan Rodger’s Leicester City side put in an impressive second-half shift to overturn a one-goal deficit at home to Spurs.

For the third away game in a row, Spurs failed to win having taken a half-time lead and their tormentor on the day was James Maddison. The youngster was full of energy and running from the middle of the park and was a real driving force against a visibly tiring Tottenham backline. He successfully completed 16 of Leicester’s 19 final third passes as the home side probed for a winner.

The youngster may have gone 31 shots without a goal prior to this match, but what an effort to end that drought! Maddison’s late winner was a perfectly executed drive from distance. For a lad who has lacked end product at times this season, this was a top-class effort worthy of winning any football match.

31 – James Maddison ended a run of 31 shots in the Premier League without a goal, since netting versus Huddersfield in April. Relief. pic.twitter.com/NcwtQMcgVM

It was another lacklustre weekend of disappointment for Manchester United as they fell to a 2-0 defeat at West Ham. Ole Gunnar Solskjaer’s side looked bereft of ideas as they slugged it out a timid display in East London.

Marcus Rashford will take the flack as he failed to register a shot on target, or make any discernible impact whatsoever before going off with a groin injury. The England international is now without a goal from open play in his last six matches, however, he is not the only one misfiring,

Worryingly for Solskjaer though, Juan Mata was also anonymous in the number 10 role while Danny James was largely ineffective despite offering explosive pace on the counter. There is much to ponder for United as they recorded a second defeat of the season with a performance which offered so little.

"It's a long way back for Utd. It's scary how far they have fallen."

Roy Keane delivered a damming assessment of #MUFC after their defeat to #WHUFC, describing himself as "shocked and saddened".

Tired front three force Liverpool to dig in at the Bridge

Football is a game of two halves, so the cliche goes, and Liverpool fans will certainly be subscribing to that old maxim after their tense 2-1 victory over Chelsea.

In an encouraging first half, the league leaders were good value for their lead but Jurgen Klopp will be a tad worried by how quickly his side faded in the second half.

In particular, the Liverpool front three looked jaded as the game wore on and possession would simply not stick with them when they really had Chelsea where they wanted them at 2-0. The home side rallied and came out of this clash with a lot of positives despite now failing to win any of their opening three home fixtures in the Premier League for the first time since 2001/02.

Fatigue in the Liverpool ranks is understandable but will need to be managed in the coming weeks if they are to maintain their impressive form.