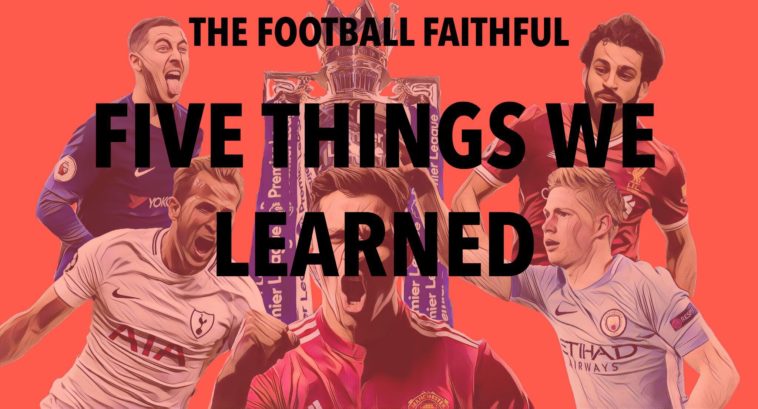 Time flies when you’re having fun, and so it is that we’ve reached the penultimate weekend of Premier League fixtures in what has been a pulsating and memorable campaign.

There was still so much to play for at either end of the table going into this round of fixtures, with the title race still undecided, a final relegation place to decide and the top four still wide open.

Here’s a look at five things we learned from the latest round of the action.

We are almost at sudden death in this season’s title race and Liverpool’s supporters would have been all too aware of this, as they entered the final five minutes of normal time at St. James’s Park, level with Newcastle. An ugly head injury to Mo Salah had disrupted Liverpool’s efforts to take the lead for a third time against a stubborn and hardworking Newcastle side, roared on by their home support.

Jurgen Klopp rolled the dice, threw on Xherdan Shaqiri and Divock Origi to try and make the difference. Liverpool top a lot of charts this season; crucially, one of those is goals from the subs bench, with 11 of their previous 84 strikes coming from their reserve options.

With the minutes trickling away, it was the substitutes who combined to grab Liverpool a huge, critical goal in their season. It was Shaqiri’s wonderful, angled free-kick from the left, which just about found it’s way onto the dreadlocks of Origi, to divert the ball into the back of the net. The Switzerland international may only have featured 24 times in the league, but he has now been involved in nine goals. Perhaps none have been more important than this one, as his side hung on for a 2-3 win which takes the title race to the final game of the season.

Spurs lose their heads as away day woe continues

It’s all going a bit Groundhog Day at Spurs at the moment. It seems as though they’ve only needed three points to secure Champions League football next season, for some weeks now. Although arch-rivals Arsenal’s draw with Brighton virtually assured Spurs qualification for next seasons Champions League, another miserable day on the road saw Tottenham leave the Vitality Stadium empty handed and with just nine men on the field.

Silly red cards for Son Hueng-min and Juan Foyth left Pochettino’s men with a mountain to climb. Nathan Ake’s header in the final minutes of stoppage time ushered in their fifth successive away defeat on the road. It’s their worst away run since May 2004, dropping them to fourth with Chelsea’s victory over Watford. Whether its fatigue, pressure or confidence, Spurs and Pochettino will be concerned by a performance which saw their players lose their heads and fall to an alarming 13th league defeat of the season.

The Arsenal players were left to do a lap of honour in the most abject of circumstances, after their 1-1 home with Brighton effectively ended their top four hopes. A shaky and unconvincing display from the Gunners saw them drop points to a Brighton side that had lost it’s previous 11 away meetings against top six opposition.

The erratic and divisive Granit Xhaka was the villain of this piece. The Switzerland international foolishly put his hands up, shoving Solly March in the area right under the noses of the officials for an obvious and costly penalty. While some of his defensive colleagues take a lot of heat, Xhaka must also share the blame of what has been yet another defensively woeful campaign for the Gunners.

He offers only sporadic cover to the back four, and is highly erratic in almost every aspect of his game. For the first time since 1983/84, Arsenal have let in 50 or more league goals in a season; you simply cannot compete for the top honours with such a shabby defensive record.

With the teams chasing the final two top four places throwing points away at a staggering rate, Manchester United were still very much in the equation to nick a place and clinch Champions League qualification. Their final two games were against relegated opposition and looked rather straight forward; Huddersfield away and Cardiff at home. If they had a chance, going into Sunday’s trip to Yorkshire, they played like a team that had their minds well and truly elsewhere.

A 1-1 draw with the league’s bottom side has become just another painful footnote in an abject season on and off the field for Manchester United. They had their chances to win this comfortably, with Phil Jones guilty of a big miss and Paul Pogba twice hitting the bar, but if they are to be brutally honest with themselves, they were far too pedestrian and gave Huddersfield enough signals with their body language and tempo, that there was something on the cards for the already relegated Terriers.

Mbenza’s goal on 60 mins, leaves United with just seven clean sheets to their name all season, only Huddersfield and Fulham have recorded fewer. At least Ole Gunnar Solskjaer was under no illusions about just how far away his side are from the top two, going into a massive summer.

“It shows us where we are. we’re not living in fantasy land thinking we can catch the top two, we’re far away but we shouldn’t be speaking about being far off the top four at Manchester United,” The Norweigan told the press yesterday.

Cardiff down with a whimper after Palace defeat

Cardiff City went in to their final home game of the season, knowing that anything but a win, would seal their relegation. It was then, very surprising to see them so flat and uninspired with so much at stake against Crystal Palace. With Roy Hodgson delivering safety and considerable comfort for The Eagles this season, his side could have been forgiven for having their minds elsewhere for this one. However, baring a brief wobble with Martin Kelly’s own goal, Palace were in full control and eased to a comfortable 1-3 lead with 20 minutes to play.

Cardiff have fought hard all season, battling through the awful trauma of Emiliano Sala’s tragic death in January. They deserve considerable credit for still being in the race with two games to play, but they seemed to have run out of gas at such a crucial juncture. The fans remain united around Neil Warnock, but they will have to go back to the drawing board in the Championship next season.