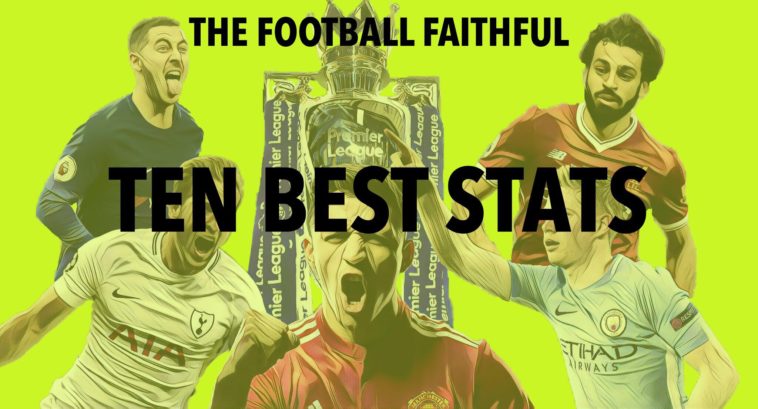 After the FA Cup took centre stage last weekend, the Premier League stuttered back into action, with only 16 teams in action, and strangely, with two games taking place on Friday night.

Nevertheless, it was an intriguing weekend, with results having a big say at the top and the bottom of the table, and as always, it threw up a number of interesting stats.

Watford travelled to South Wales on Friday night to face Neil Warnock’s Cardiff side, and the Hornets kept the Bluebirds firmly in danger with a resounding 5-1 win. Gerard Deulofeu netted a delightful hat-trick, and in doing so, became just the third player in Premier League history to bag a treble on a Friday night, following Dean Windass in 2000 and Thierry Henry, who actually did it twice back in 2004.

Elsewhere on Friday night, West Ham compounded Fulham’s relegation woes, which was the Cottagers ninth London derby defeat in a row – the longest such run in the history of the Premier League. Claudio Ranieri’s side actually took the lead in the third minute, before Javier Hernandez, Issa Diop and Michail Antonio completed the turnaround for the Hammers.

Hernandez’s 29th minute strike, which brought the scores level at the London Stadium, was the Mexican’s 50th goal in the Premier League, with all 50 being scored from inside the 18-yard box. He may well be the ‘little pea’ but he is certainly a massive goal poacher.

Fast forwarding to Saturday’s action and Burnley dented Spurs title hopes with a 2-1 win at Turf Moor. Goals from Chris Wood and Ashley Barnes either side of a Harry Kane equaliser leave the North London side six points off leaders Liverpool. While some will have described it as a shock defeat, Burnley are in fact one of the more in-form sides in the league and are now unbeaten in their last eight.

Key to the Clarets good form has been the goalscoring form of strike duo, Barnes and Wood, who have both scored in each of the Clarets last four outings.

To me, to you. 👬 pic.twitter.com/1TePUcxtMe

Down at the Vitality Stadium in a game which was dominated by three penalties, Wolves on-loan striker Raul Jimenez scored his 10th goal of the season from the spot. The Mexican has been an integral part of Wolves goalscoring exploits since their return to the Premier League, being involved in 42.9% of their goals, having also provided five assists.

Elsewhere on Saturday, it was a story of two managers, as septuagenarian Roy Hodgson became the oldest manager in Premier League history, overtaking the great Sir Bobby Robson at the grand old age of 71 years and 198 days old. However, it wasn’t a great occasion for Hodgson’s opposite number to remember though, with Claude Puel being sacked within 24 hours after Leicester‘s 4-1 defeat against Crystal Palace.

Michy Batshuayi got the scoring underway, before a Wilfried Zaha brace and a Luka Milivojevic penalty was enough to see the Eagles move up to 13th. Despite often being the talisman for Palace, Saturday evening represented the first time in Zaha’s career that he had scored in three consecutive games in his career, while nobody has scored more than Milivojevic’s 20 penalties since the Serbian made his Premier League debut in 2017.

Moving on to Sunday’s action, and Manchester United faced their bitter rivals Liverpool in a game that could have huge ramifications in the race for the title and the top four.

However, it was a damp squib of a game, which was ruined in the first half, with Manchester United losing Ander Herrera, Juan Mata, and Jesse Lingard to injury, while Liverpool were robbed of Roberto Firmino in what was an incredible turn of events. Most fans at Old Trafford had never seen anything like it, with the players dropping like flies. However, it wasn’t the first time that four subs had to be made in the first half, with the situation happening back in 2009 when Wigan hosted Fulham.

The game ultimately finished 0-0, which was the first time that Liverpool had failed to score a goal away from home this season, while it also brought David de Gea’s 100th clean sheet up, becoming just the second Manchester United goalkeeper to reach the milestone behind the great Peter Schmeichel.

That draw at Old Trafford meant that Arsenal had the chance to leapfrog Ole Gunnar Solskjaer’s side, and they certainly seized upon that chance with a 2-0 win over struggling Southampton. Alexandre Lacazette opened the scoring before Henrikh Mkhitaryan made it two.

Lacazette’s has certainly been a man in form for the Gunners lately, and his seventh-minute strike against the Saints sees him become the first player to score in four consecutive games for Arsenal since Robin van Persie did so in 2012.