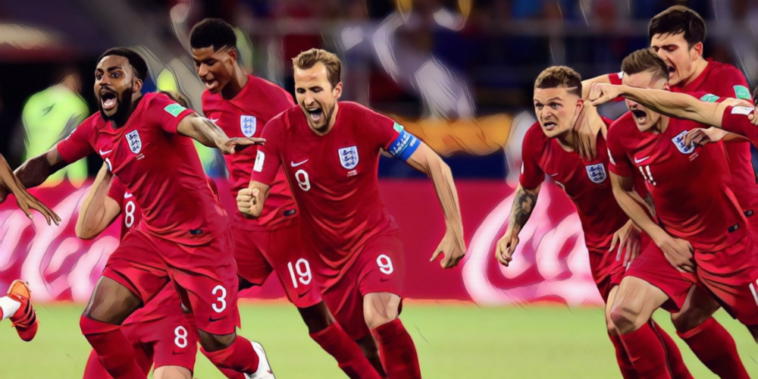 England take on Senegal in the World Cup’s Round of 16 this weekend, in what will be the first-ever meeting between the nations in Al Khor.

The African champions are set to provide a tricky test for Gareth Southgate and his side, who will be looking to make an impact in the latter stages of the tournament.

Ahead of the clash, we remember England’s last five Round of 16 games at the FIFA World Cup.

England overcame their shootout hoodoo to edge past Colombia in 2018, triumphing on penalties for the first time in a World Cup fixture.

Harry Kane’s penalty looked to have won England the tie in normal time, only for Yerry Mina to score a dramatic equaliser for the Colombians in stoppage time. The teams were unable to be separated during the additional period, with penalties deciding the contest.

It looked set to be heartache for England once again after Jordan Henderson’s miss, but Mateus Uribe struck the woodwork to leave the shootout poised. Jordan Pickford – who made a stunning save from Uribe in normal time – then stopped Carlos Bacca’s effort, allowing Eric Dier to seal England’s first shootout win at a major tournament since Euro ’96.

It was the Three Lions’ first win in the knockout stages of a World Cup since 2006.

England’s miserable World Cup campaign came to an end with a punishing performance from Germany in South Africa.

Fabio Capello’s team had laboured through the group stage to finish as runners-up to the USA, with the result a last-16 tie with old rivals Germany in Bloemfontein.

The Three Lions were humiliated as a dominant Germany side raced into a two-goal lead, as goals from Miroslav Klose and Lukas Podolski put Die Mannschaft in control. Matthew Upson’s header gave England a lifeline, before a moment of controversy denied Capello’s team an equaliser.

📺 What Frank Lampard and @England would have done for VAR here…

🗓 We're just ONE WEEK away from the start of the @FIFAWorldCup#ITVFootball pic.twitter.com/I9xIV86qmH

Frank Lampard’s brilliant finish hit the underside of the crossbar and landed behind the goal-line, but referee Jorge Larrionda and his officials astonishingly waved play on despite strong protests from England.

England hit the crossbar early in the second period, but a vibrant Germany side picked off their opponents on the counter to record an emphatic win. Thomas Muller scored twice for the Germans after the break, as England crashed out of the competition in embarrassing fashion.

England reached the quarter-finals of the 2006 tournament after a 1-0 win over Ecuador, with Sven-Goran Eriksson’s side making hard work of their South American opponents.

The Three Lions underwhelmed in an unconvincing performance, one that saw David Beckham’s fine free-kick secure progress to the last eight.

The England captain bent home a brilliant set-piece that crept inside the near post and past Cristian Mora in the Ecuador goal.

Beckham – who had struggled with illness in the build-up to the clash – became the first England player to score at three World Cups, with his winner setting up a quarter-final date with Portugal.

England eased into the last eight after scoring three first-half goals to blitz Denmark in 2002.

Michael Owen doubled the advantage, as the forward pounced on a loose ball inside the area to fire home a low left-footed finish. Emile Heskey completed the rout a minute before half-time, with Sorensen at fault once more as he allowed a well-struck shot to squirm under his grasp.

It was comfortable and convincing from England, words not always associated with performances in the World Cup’s knockout rounds. Their run would end in the last eight however, as eventual champions Brazil won a memorable contest in Shizuoka.

Argentina and England produced an all-time classic in the Round of 16 at France ’98.

A chaotic clash was decided on penalties, following a fixture that contained four goals, two penalties, a red card and a disallowed goal for England. In a frantic start Gabriel Batistuta and Alan Shearer exchanged penalties inside the opening ten minutes, before England took the lead in stunning style just minutes later.

Michael Owen – the teenager who had gatecrashed the England squad after a brilliant first full season at Liverpool – scored a sensational solo goal as he picked up possession just inside the Argentina half, before bursting past the South Americans’ backline and finishing cooly.

#OnThisDay 22 years ago, Michael Owen stepped out in an 🏴󠁧󠁢󠁥󠁮󠁧󠁿@England shirt for the first time.

A few months later, we all know what happened next… 🤩#WorldCup | @themichaelowen pic.twitter.com/ePGMrQpaFl

Javier Zanetti brought the teams level again on the stroke of half-time, before the narrative of the game changed just a minute into the second period. David Beckham was sent off for a petulant kick at Diego Simeone, leaving England with an uphill task to progress.

England held on to reach a shootout, but misses from Paul Ince and David Batty saw Argentina progress 4-3 on penalties. Beckham became public enemy number one for his role in England’s exit, a moment which began a remarkable road to redemption for the midfielder.