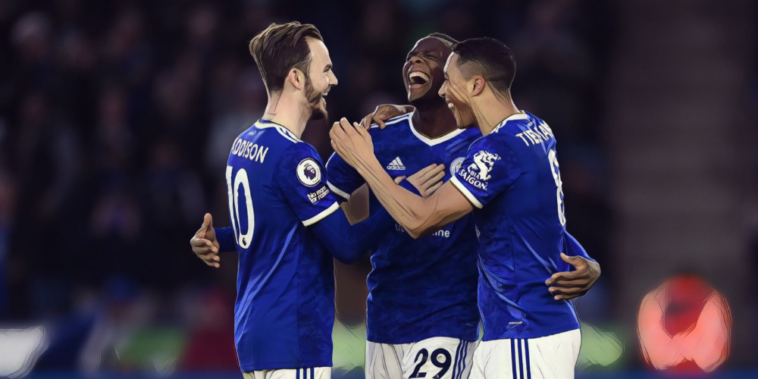 Each week we delve into the Premier League’s weekend action and compile our divisional Team of the Week.

The weekend’s action saw a wealth of penalties across the division, with each of Manchester City, Liverpool, Chelsea and Manchester United requiring spot-kicks to secure three points.

Leicester bounced back from their Europa League exit with a 4-0 thrashing of Newcastle, whilst Arsenal secured a 3-0 in over Southampton to edge closer to the Champions League places. Elsewhere Brentford left it late to beat Watford, Burnley held West Ham, and Crystal Palace increased the pressure on Rafael Benitez and Everton.

Manchester United continued their winning start under Ralf Rangnick, though made hard work of beating an improving Norwich side at Carrow Road.

Cristiano Ronaldo’s penalty sealed a 1-0 win against the Canaries, but the Red Devils – not for the first time this season – had David de Gea to thank for the result, the Spaniard making a string of saves to secure a second successive clean sheet.

David de Gea had five saves inside the box against Norwich 🧱 pic.twitter.com/bCoY2JN1wA

De Gea reacted well to turn Teemu Pukki’s drive over the crossbar, before making a fantastic save to keep out Ozan Kabak’s header and ensure United claimed all three points.

Tomiyasu has proven a shrewd signing for Arsenal and produced another impressive performance against Southampton this weekend, the full-back strong defensively and showcasing an improving influence when venturing forward.

The Japan international was alert to the threat the Saints possessed and made a superb tackle to stop Kyle Walker-Peters, whilst he was involved in each of the Gunners’ opening two goals as Mikel Arteta’s side won 3-0 at the Emirates.

Arsenal have not always shown consistency in their performances this season, but the same cannot be said for their summer signing from Bologna.

Leicester returned to winning ways in emphatic fashion after thrashing Newcastle 4-0 at the King Power Stadium, with the Foxes producing a much-improved performance that included a first clean sheet since the opening weekend of the season.

Soyuncu produced a commanding performance despite seeing centre-back partner Jonny Evans limp out of the clash early on, dominating his duels with aggressive, front-footed defending. Having attracted criticism for his recent displays, this was a positive performance from the Turkey international.

Chelsea snatched a late win against Leeds, with the European champions riding their luck to secure three points in an entertaining contest at Stamford Bridge.

It required two penalties from Jorginho to earn the west Londoners a 3-2 win, each spot-kick won by Antonio Rudiger who made himself a nuisance at both ends of the pitch.

This was far from a vintage Chelsea performance and their defensive issues are a problem for Thomas Tuchel at present, but a combination of Rudiger’s ambition to charge forward, aggression, and general shithousery saw the defender force the issue and give Chelsea the chance to snatch a win.

The most positive performance in an otherwise forgettable clash between Burnley and West Ham, the full-back provided David Moyes with a reminder of his qualities with an encouraging showing at Turf Moor.

Masuaku is not a natural defender but produced a committed performance at Burnley, ranking second amongst his West Ham teammates for tackles (2) and third for clearances (3).

The best work of the 28-year-old came when venturing forward, however, with his five dribbles a team-leading total. Masuaku seems to have taken confidence from his fluke winner against Chelsea last time out and provided West Ham with an outlet on the left this weekend.

Youri Tielemans celebrated his 100th Premier League appearance with two goals in Leicester’s 4-0 win over Newcastle, the midfielder scoring a league brace for just the second time since arriving into English football.

The Belgium international was at the centre of an impressive performance from the Foxes, proving an influential figure at both ends of the pitch.

He netted his first from the penalty spot in emphatic fashion, before scoring a second after ghosting forward to place the finishing touch on a flowing team move.

Tielemans remains a crucial figure to this side and now has 16 goals & 16 assists in his 100 league appearances for Leicester, with only Kevin De Bruyne and Bruno Fernandes having also reached 16+ in each metric amongst midfielders since Tielemans’ Premier League debut.

Conor Gallagher continued his excellent season with another all-action showing for Crystal Palace, the box-to-box brilliance of the midfielder evident once again as the Eagles beat Everton 3-1.

Gallagher opened the scoring with crisp finish from Jordan Ayew’s centre, before netting a stunning second with a curling finish into the top corner to seal all three points for Patrick Vieira’s side.

The 21-year-old has now scored six goals and provided three assists in the Premier League this season, with only Mason Mount (10) having provided more goal involvements amongst u23 players.

🎙️ "He started it, and boy has he finished it!"

The 21-year-old seals the deal for #CPFC with a stunning strike 💥 pic.twitter.com/xZOaDsjN3c

Palace will want a permanent deal, but there’s a strong chance that Gallagher could partner Mount in the Chelsea midfield next season, the loanee doing all he can to earn Thomas Tuchel’s trust for next season.

Martin Odegaard is growing into his role in the Arsenal side and produced his best performance of the campaign against Southampton, the midfielder the creative hub of the north London side’s performance at the Emirates.

Odegaard’s best often comes when he is advanced high up the pitch, drifting into dangerous areas inside the final third and always making himself available to receive possession.

The Norway international was creative and influential throughout against the Saints, whilst he scored for the third consecutive game after heading home Kieran Tierney’s centre. After a slow start to the season, there are signs that Odegaard is fast becoming indispensable to Arteta and Arsenal.

Maddison’s fine form continued with another superb showing in Leicester’s win over Newcastle, the midfielder at the centre of an impressive performance from Brendan Rodgers’ side.

The 25-year-old won the penalty for the opener after anticipating the contact from Jamaal Lascelles, before registering an assist after unselfishly teeing up Youri Tielemans for Leicester’s third goal.

⚽️🅰️ James Maddison has both scored & assisted for the 2nd time in his 114 app PL career – both occasions in his last 4 apps (also v Watford, Nov 28) pic.twitter.com/HItbDO6RUs

Maddison added the fourth after a neat one-two with Patson Daka to score his third goal in four league fixtures, his increasing productivity around goal a welcome sight for Rodgers as he looks for consistency from one of the Foxes’ brightest talents.

Brentford’s bright spark in what could prove a huge result in the Bees’ season, the forward worked tirelessly as Thomas Frank’s side came from behind to snatch a stoppage-time win.

In the absence of Ivan Toney it was Mbuemo who offered Brentford’s biggest threat, with the Frenchman’s industrious performance rewarded with the late penalty to seal three points.

He kept his cool superbly to roll the spot-kick home, a goal that has provided Brentford with some much-needed breathing room from the Premier League’s bottom three.

Patson Daka was named in the starting side for the second successive week for Leicester, with the forward enhancing his claim for a regular run in the side against Newcastle.

The Zambia international worked hard without reward during the opening exchanges, before coming alive in the second half as Leicester ran riot to secure an emphatic win.

Daka tapped home the second goal from Harvey Barnes’ cross, before playing a crucial role in the third and setting up James Maddison for the fourth of the afternoon.

Directly involved in a goal once every 57.6 minutes. 🔥 pic.twitter.com/ntZUusHuur

It’s now seven goals and three assist in just eight starts across all competitions for Daka, the summer signing from Red Bull Salzburg looking increasingly like the idealistic long-term replacement for Jamie Vardy.