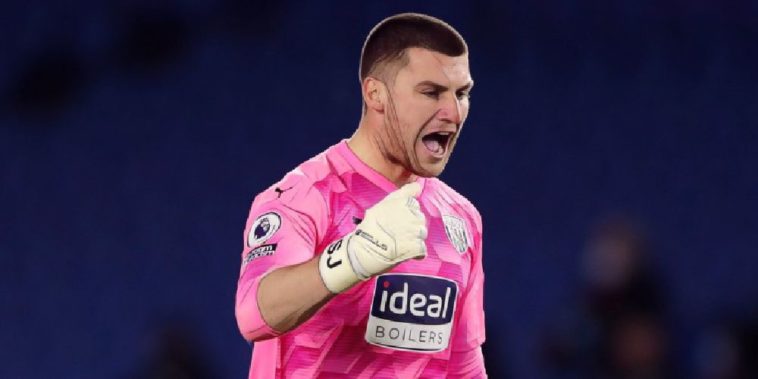 The festive football season continued with a full midweek round of Premier League fixtures, including a top-of-the-table clash as Liverpool beat Tottenham to replace the north London side as league leaders.

Manchester United continued their bizarre record of falling behind in away fixtures before coming back to secure three points, though there was less success for Manchester City who faltered at home to draw with struggling West Brom.

Following the midweek action we’ve compiled our dream XI, here is The Football Faithful’s Premier League Team of the Week for gameweek 13.

West Brom remain firmly mired in a relegation dogfight but will take huge encouragement from their midweek performance at Manchester City, battling valiantly to secure a shock 1-1 draw at the Etihad.

The result was not enough to move the Baggies out of the Premier League’s relegation places or save Slaven Bilic from becoming the first manager to lose his job this season, though the incoming Sam Allardyce will no doubt have been pleased with the viewing.

West Brom defended resolutely but were once again reliant on a brilliant goalkeeping display from Sam Johnstone, who must surely be knocking on the door for an England call-up given his performances in recent weeks.

The 27-year-old was commanding as the last line of defence and produced some late heroics to deny both Ilkay Gundogan and Raheem Sterling, continuing his impressive recent form and securing an unlikely point for the visitors.

West Ham continued their impressive progress under David Moyes with a 1-1 draw with Crystal Palace at the London Stadium, Sebastien Haller’s sensational overhead kick securing a point that leaves the Hammers just three points adrift of the Champions League places.

Haller’s moment of magic stole the headlines but it was Vladimir Coufal who most impressed for West Ham, the £5m capture of the Czech Republic international having proven to be a bargain for the east Londoners since his summer arrival.

The 28-year-old made more challenges than any other teammate (six) and largely nullified the threat of the dangerous Wilfried Zaha, in addition to making three clearances, two interceptions and providing the assist for Haller’s equaliser.

Moyes described the full-back as West Ham’s ‘best player’ following the draw and the summer signing continues to go from strength to strength in English football.

After failing to keep a clean sheet in 10 league fixtures, it’s now back-to-back shut-outs for Everton who boosted their hopes of European qualification with two vital victories against Chelsea and Leicester over the past week.

Carlo Ancelotti’s side defended strongly against Leicester at the King Power Stadium in midweek to emerge with a 2-0 victory, Michael Keane continuing is solid start to the season at the heart of the defence.

The England international is relishing learning under the guidance of Ancelotti and is enjoying the best period of his Everton career at present, his positioning superb against the Foxes as he brought leadership and presence to the backline.

Another of the West Brom side who dug deep to secure a precious point at Manchester City, following what has been a difficult adaptation to the Premier League for the Baggies’ backline.

At the Etihad, however, they were resilient with Sami Ajayi at the heart of their success, edging his personal duel with Gabriel Jesus and making nine clearances in addition to two important blocks.

The 27-year-old also forced Ruben Dias’ own goal with a turn and deflected shot, a fine night’s work for the Nigerian international who will hope his side can build on this showing under new manager Sam Allardyce.

Fulham’s flying full-back was unfortunate not to make our Team of the Week last weekend but is included following another excellent showing against Brighton on Wednesday night, with Robinson having been one of the most impressive performers in the Cottager’s recent resurgence.

The US international made three clearances, two interceptions and two tackles, in addition to two key passes as he made his presence felt further forward.

The 23-year-old looks like a shrewd signing from Scott Parker and has made significant strides since replacing play-off hero Joe Bryan in the first-team this season, Robinson appearing to only be scratching at the surface of his potential.

Everton edged closer to the top four with a 2-0 victory at Leicester in midweek, Carlo Ancelotti’s side beating another direct rival for continental football in impressive fashion.

Key to their victory was a powerhouse performance from summer signing Abdoulaye Doucoure, who starred in the Everton engine room alongside Allan before the latter’s withdrawal with injury.

Doucoure was composed on the ball and worked tirelessly when out of possession, covering every blade of grass at the King Power Stadium with Ancelotti insisting post-match it was the Frenchman’s best performance in an Everton shirt.

Everton’s fortunes have largely improved following their strengthening in midfield, a previous weakness now one of the club’s greatest strengths.

‘Top, top-class player’ was the assessment of Jurgen Klopp following Curtis Jones’ latest Liverpool performance, the teenager having seized his opportunity in the Reds’ first-team over the opening weeks of the new season.

Injuries have deprived the champions of some notable names in recent weeks but Jones has continued to deputise in fine fashion, the academy graduate at the heart of a 2-1 victory over Tottenham that moved Liverpool back to the summit.

The 19-year-old exuded confidence in a classy and composed performance, incredibly completing more passes in the opposition half (81) than the entire Spurs team (57) and playing a vital role in the game’s opening goal.

There was a highlight reel flick in the second half for a player far from overawed on the biggest stage, his performances in recent weeks having provided Klopp with a real headache when his full midfield compliment return.

Leeds broke their long-standing transfer record during the summer to sign Rodrigo from Valencia, a statement of intent to announce the club’s return to the Premier League after a 16-year absence.

The Spain international is a versatile talent whose position has been difficult to define during his career to date, a sort of half-forward, half-midfielder capable of dribbling at speed and creating opportunities.

Against Newcastle in midweek he was the link-man between the Leeds midfield and lone forward Patrick Bamford, his effort against the crossbar leading to the game’s opening goal before scoring himself with a perfectly guided header.

It was an encouraging display from the 29-year-old who, alongside Raphinha, adds further spark to a vibrant Leeds attack, Marcelo Bielsa’s side arguably the most entertaining in the division.

Jack Harrison is cruelly unfortunate to miss out on selection for this team following a starring display on the wing, after producing a superb touch and assist for Rodrigo’s goal and netting a thumping effort from distance.

Ole Gunnar Solskjaer’s side remain the Premier League’s best travellers, maintaining their perfect record away from home with yet another comeback victory at Sheffield United.

Manchester United have now remarkably won each of their six away games this season despite falling behind on each occasion, with their 3-2 success at Bramall Lane extending a club record of 10 consecutive away victories.

After falling behind in comical circumstances, Marcus Rashford levelled proceedings with an exquisite touch and finish beyond Aaron Ramsdale, before forcing the England U21 international into a fine save as he tormented the Blades with his pace and purpose.

Marcus Rashford netted his first away brace in the #PL ⚽️⚽️

Rashford netted his second and United’s third after capping a wonderful free-flowing move, the Red Devils’ counter-attacking threat and speed amongst the very best in the Premier League when everything clicks into gear.

Joining Rashford in our front three is Manchester United teammate Anthony Martial, who bounced back from a difficult start to the campaign with an improved showing at Bramall Lane.

The France international’s link-up play was impressive throughout and he led his side for chances created, in addition to netting his first Premier League goal of the season and providing the assist for Rashford’s second of the evening.

Hopefully he can kickstart his PL campaign from here. 👊 pic.twitter.com/2fx7PK6ehD

After scoring a career-best 23 goals in all competitions last season it was a welcome return to form for the forward, who will be hoping to kick-on as United look to close the gap on the league leaders in the coming weeks.

Roberto Firmino has had his fair share of critics over the opening months of the campaign after a quiet spell in terms of goals for Liverpool, the prolific start of summer signing Diogo Jota having seen some question his contribution to the champions.

Jurgen Klopp has long insisted that goals are just a small facet of Firmino’s role in the Reds’ side, though will no doubt have been pleased to see the Brazilian answer his critics with an impressive all-round performance against Tottenham in midweek.

Firmino pressed intently and dropped into dangerous spaces between enemy lines in signature fashion, in addition to providing a goal threat with a game-leading five shots on goal.

The 28-year-old was rewarded for his efforts late on with a 90th-minute winner for the champions, powering home Andy Robertson’s corner to seal a vital victory for Liverpool who moved ominously back to the summit.