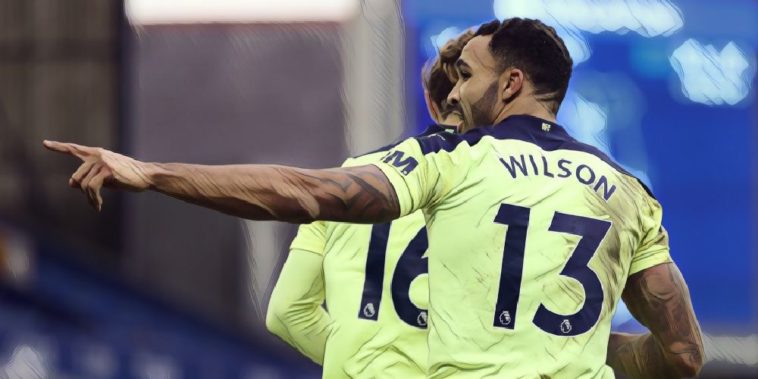 The latest round of action proved a weekend of both firsts and upsets, with Thomas Tuchel securing his maiden win as Chelsea’s new head coach and Brighton finally securing a home victory by beating Tottenham.

Liverpool and Leeds secured impressive away wins at West Ham and Leicester respectively, whilst league leaders Manchester City strengthened their title challenge with an eighth consecutive league victory and yet another clean sheet.

It’s that time of the week again where we compile our dream XI from the weekend’s fixtures, here is The Football Faithful’s Premier League Team of the Week:

Ruben Dias arrival at Manchester City has been regarded by many as the signing of the season so far, but Emiliano Martinez most certainly deserves to be in the conversation.

The goalkeeper has been excellent since deciding to leave Arsenal for Aston Villa in search of regular first-team football and secured his 10th clean sheet of the season as Dean Smith’s side strengthened their push for Europe with a 1-0 win at Southampton.

The towering Argentine made some vital saves to deny the home side an equaliser including brilliant stops from both Che Adams and Jan Bednarek, becoming the first Villa keeper in more than a decade to keep 10 clean sheets in a Premier League season.

🥅 Emiliano Martinez is the first @AVFCOfficial goalkeeper to record 10 PL clean sheets in a single season since Brad Friedel, who kept 15 in 2009-10

Martinez’s arrival has provided Aston Villa with a reliable last line of defence and the club’s recruitment has transformed the side from relegation candidates to a team many who follow football betting believe are now European contenders, Smith’s side now just three points adrift of fifth-placed West Ham with two games in hand.

Frank Lampard was widely praised for his faith in youth at Chelsea, but Callum Hudson-Odoi was one academy graduate who could perhaps have been left disappointed with his opportunities under the former head coach.

The 20-year-old appears to have an admirer in the newly-appointed Thomas Tuchel, however, who has utilised the winger in a more defensive role during his first two fixtures in charge at Stamford Bridge.

Hudson-Odoi has played at wing-back during the games against Wolves and Burnley and has been arguably Chelsea’s best player in both fixtures, his mix of athletic attributes and dribbling technique making him tailor-made for the deeper position.

Dyche to Brady after another Hudson-Odoi overlap 🗣 “Robbie! Tune in!”

The England international drove forward throughout and made the most of the space afforded to him by the Clarets, providing an assist for Cesar Azpilicueta and a number of fine crosses as Chelsea’s outlet down the right.

Another makeshift backline held firm for the second successive fixture as Liverpool secured a 3-1 win at West Ham this weekend, Nathaniel Phillips and Jordan Henderson incredibly the Reds’ 12th different centre-back partnership in the Premier League this season.

Phillips has been thrust into a senior role this season following a succession of injuries and whilst the 23-year-old may not be the long-term solution, he is an honest and committed defender who can play a role over the second half of the season.

The centre-back was dominant in the air and handled the threat of Michail Antonio admirably, Phillips an uncompromising defender willing to put his body on the line for the cause.

Jurgen Klopp on Nat Phillips: “Outstanding game, everybody saw it – super professional, super calm, incredibly strong in the air, good challenges, good football. He defended incredibly well – together with Hendo, I have to say, but the full-backs as well.” #awlfc [lfc] pic.twitter.com/wO0OPWhAvO

The inexperienced star was helped by the leadership of Henderson alongside him who barked out orders in an unorthodox centre-back role, the duo helping ensure Liverpool secured a victory that keeps the champions in touch with the league leaders.

Rob Holding appeared to be on his way out at Arsenal during the summer with the defender coming close to leaving for Newcastle on loan, only for Mikel Arteta to change his mind and decide the centre-back was a part of his plans.

Holding has seized his second chance with the north Londoners and has now emerged as one of the first names on the Gunners’ teamsheet, with the centre-back getting better and better with each passing performance during Arsenal’s recent resurgence.

The 25-year-old was impressive once again as Arsenal shared the points with Manchester United following a goalless draw this weekend, extending their unbeaten run to seven Premier League games and keeping a fourth clean sheet in five league fixtures.

No player has made more clearances (10) in a single Premier League game for Arsenal this season than Rob Holding.

He's made more clearances (76) and won more aerial duels (43) than any other Arsenal player this campaign. 💪 pic.twitter.com/gkeAbZReDU

Holding won each of his aerial duels and made a huge 10 clearances at the Emirates, the defender playing his part in an Arsenal side that have shown signs of improved solidity in recent weeks.

Amongst the most improved players in an Aston Villa side with ambitions of securing continental football this season, Matt Targett has been an impressive performer in recent weeks for Dean Smith’s side.

The left-back is enjoying a fine run of form at present and was again impressive on his return to former side Southampton this weekend, winning his duels with the likes of Theo Walcott and Nathan Redmond and pushing forward down the left flank.

It was Targett’s perfectly weighted clipped pass which released Jack Grealish to provide the game’s only goal and the 25-year-old’s recent showings have raised talk from the Villa faithful that he should be in contention for an England call.

England are currently stocked with options at right-back but the position on the opposite flank is far from assured and Targett will hope to push the likes of Ben Chilwell and Luke Shaw for an international place on current form.

Leeds‘ multi-functional star delivered again as his side shocked Leicester at the King Power Stadium, coming from behind to secure arguably their best result of the Premier League season so far.

Dallas’ versatility has been a priceless commodity to Marcelo Bielsa since his arrival at Elland Road and the Northern Ireland international started in midfield against the Foxes, his hard-running style providing Leeds with a forward threat that Leicester struggled to deal with.

The 29-year-old found space with his third-man runs from deep and scored Leeds’ equaliser with a clinical finish after driving forward from midfield, Dallas’ box-to-box style crucial as the visitors overwhelmed Leicester with energy and relentless running.

Intelligent in possession and industrious without it, Dallas is a player perfectly suited to the demands of Bielsa’s innovative system and style.

Graham Potter will no doubt he hugely relieved after Brighton earned themselves breathing space from the Premier League’s bottom three with a long-awaited home victory, the Seagulls securing their first win at the Amex Stadium since June after beating Tottenham.

Potter described his side’s showing as their best performance in two years as Brighton secured a well-deserved victory over the north London side, Leandro Trossard scoring the game’s only goal after Pascal Gross’ cutback.

It was the latter who symbolised an improved showing from Brighton with the midfielder covering more ground than any other player, the German central to his side’s pressing style and a constant creative threat.

Gross’ five chances created were the joint-most by a Brighton player in a Premier League fixture this season and he remains a reliable figure in the Seagulls’ engine room, the trio of Gross, Yves Bissouma and Alex Mac Allister a midfield which holds the key to the club’s survival bid.

Newcastle produced the shock of the weekend after beating Everton 2-0 at Goodison Park, the result ending a run of 11 games without a win and six successive defeats.

Central to their success was the performance of Paraguayan international Miguel Almiron, who ran himself into the ground in a display full of energy and attacking enthusiasm.

Almiron made three key passes in addition to two tackles and two interceptions, with his pressing crucial to arguably Newcastle’s best performance of the Premier League season so far.

The switch to a back four formation allowed the 26-year-old to return to a central position and it is one that gets the best out of his talents, Newcastle’s best passages of play coming through the star who worked tirelessly and provided a counter-attacking threat with his pace in an attacking midfield role.

The league’s leading scorer ended a run of six league games without a goal in clinical fashion at West Ham, Mohamed Salah back to his brilliant best to secure Liverpool a 3-1 win at the London Stadium.

Salah proved the match-winner with two wonderful second-half goals, creating the first for himself with some clever footwork inside the Hammers’ penalty area before an exquisite touch and finish to double the Reds’ advantage after a lightning counter.

The Egyptian international has now scored more goals against West Ham than any other Premier League opponent, his double improving his record to nine goals in just eight appearances against the east London outfit.

Salah also moved three clear of nearest challenges Harry Kane and Son Heung-Min in the race to secure a third Golden Boot in just four seasons, his goalscoring excellence crucial to Liverpool’s hopes of clawing their way back into the title race.

Another player who ended a mini-drought this weekend, Patrick Bamford’s superb season for Leeds continued with a fine individual display at Leicester.

Bamford showcased his full repertoire of talents on what proved a fine afternoon for Marcelo Bielsa’s side, providing the assist for Stuart Dallas’ opener with a clever outside-of-the-foot pass for the onrushing midfielder to equalise.

The 27-year-old then netted his 11th league goal of the campaign with a stunning finish beyond Kasper Schmeichel, with only Harry Kane having now scored more goals amongst English forwards in the Premier League this season.

Bamford helped seal the result late on with an incredibly unselfish assist to provide Jack Harrison with a tap-in, a goal symbolic of a team player who has now been directly involved in 15 goals in 20 top-flight appearances for Leeds.

Where would Newcastle be without Callum Wilson this season?

Heading rapidly towards the Championship, you would imagine.

Wilson has scored almost half of the Magpies league goals this season and moved to 10 for the campaign with a match-winning double against Everton this weekend, opening the scoring at Goodison Park with a majestic header from Jonjo Shelvey’s corner.

Callum Wilson has been involved in 67% of Newcastle’s 21 #PL goals this season, scoring 10 and assisting four#EVENEW pic.twitter.com/eQ1eREsZHW

The 28-year-old’s mix work rate and goalscoring prowess has provided Newcastle with a much-needed focal point this season and he netted his 100th career goal with a well-taken second on the break in stoppage-time.

It could have been better for the forward who twice hit the woodwork and the Magpies will be counting their lucky stars that Wilson chose a move to St James’ Park over joining Aston Villa during the summer.