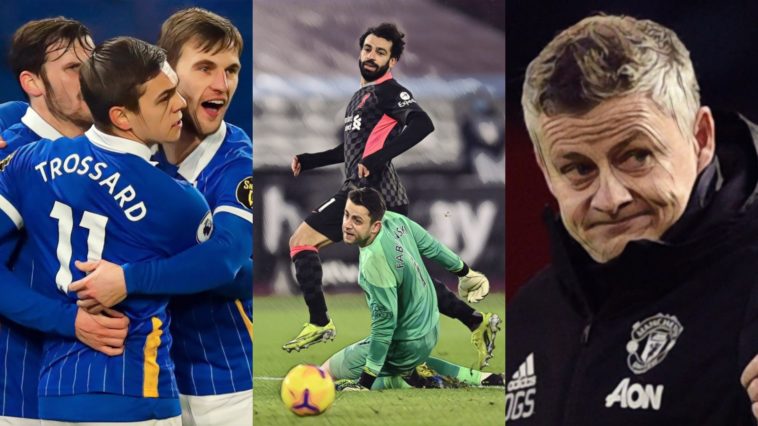 Presenting some of the standout statistics from gameweek 21 in the Premier League, featuring Brighton’s first home win of the season, Liverpool’s Mo Salah punishes West Ham yet again, and Manchester United’s failure to break down Arsenal.

It’s been seven long months, but Brighton finally have a win at the Amex Stadium after 14 previous attempts. Before beating Tottenham Hotspur 1-0 on Sunday night, the Seagulls were the only side left in England’s top four divisions without a win at home this season.

Spurs were toothless with no recognised striker starting from kick-off, taking eight shots for a measly 0.49xG and had just one attempt on goal in the entire first-half. This was the 11th time a side managed by José Mourinho had one shot or fewer in the first half of a Premier League game; six of those occasions have come while in charge of Spurs.

Tottenham are clearly missing their talisman Harry Kane, having won just three of their past 13 Premier League games in which the striker has not featured (four draw, six defeats), including none of their past four (one draw, three defeats).

Just over a month ago Spurs were being tipped for a title tilt, but their form has nosedived. The Lilywhites have lost four of their past eight league games (two wins, two draws), as many as in their previous 28 such matches beforehand.

The Portuguese tactician has now lost all three of his away league games at Brighton, the first time he has ever lost three consecutive away league visits to an opponent in his managerial career.

Brighton also led for 73 minutes on Sunday, having led for a total 71 minutes in their previous ten home league games this season.

No centre-backs, no Sadio Mané, no problem. Three second-half goals at the London Stadium ensured that Liverpool picked up a second successive win in the Premier League to get their title defence back on track.

It was Mo Salah who powered them to a 3-1 victory over West Ham United, scoring a brace of brilliant goals to put the Hammers to the sword and score for the first time in 544 minutes. The Egyptian has now scored nine goals against West Ham, his best return against a side in the Premier League.

4 – All four of Liverpool's away wins in the Premier League this season have been over London clubs (Chelsea, Crystal Palace, Spurs, West Ham); they are the first side in English top-flight history to pick up their first four away league wins in a season all in London. Punished. pic.twitter.com/KyrUFthrqP

Manager Jürgen Klopp played Jordan Henderson and Nat Phillips in the centre of his defence, the team’s twelfth different centre-back partnership of the season.

Why are the media so reluctant to call out Jurgen Klopp’s deplorable traits?

Despite the fact that Arsenal were missing three key players on Saturday, Manchester United could find a way to unlock the Gunners. They have failed to beat any of the Big Six teams in six meetings this season, scoring just one goal; their last win in such a fixture came in March 2020.

It is the sixth league game in a row the Red Devils have failed to beat their foes from North London, Arsenal’s longest unbeaten run against them in the league since 1980-83.

Echoing that previous run, Man United have failed to score in three consecutive league matches against Arsenal for the first time since a run of four games between September 1981 and May 1983. This was also the first goalless draw between the two sides in the Premier League since February 2014.

Ole Gunnar Solskjaer has yet to manage a win over Arsenal since taking the job in December 2018, drawing two and losing three. The Norwegian is the only United manager to face Arsenal more than once in the top flight without winning a game.

A good spell continues for Mikel Arteta’s charges, though, as they have kept four consecutive home clean sheets in all competitions for the first time since April 2019.