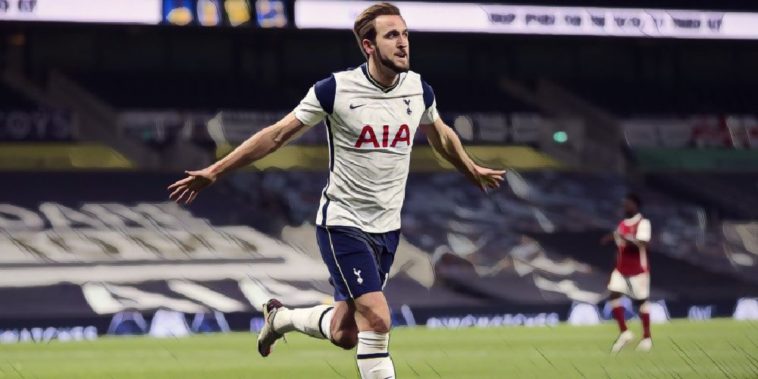 Tottenham remain top of the Premier League following another weekend of entertaining action across the division, a Mourinho masterclass of dogged defending and clinical counter-attack securing a north London derby victory over Arsenal.

Liverpool kept pace with the league leaders after thrashing Wolves in impressive fashion, whilst Chelsea continued their good form and Crystal Palace hit five in an away top flight fixture for the first time in their history.

Elsewhere Manchester United came from behind to win at West Ham and Sheffield United’s woes continued as they slipped to a late defeat to Leicester at Bramall Lane.

Nick Pope had a chance to impress this weekend with England manager Gareth Southgate in attendance at Turf Moor, the goalkeeper facing off against the man he’s trying to displace at international level as Burnley played out a 1-1 draw with Everton and Jordan Pickford.

The 28-year-old will have done his chances of becoming the Three Lions’ number one no harm with a fine performance, making an instinctive save to deny Dominic Calvert-Lewin from close range before getting to James Rodriguez’s curled effort at full stretch.

Nick Pope excellent again, whether reaction save or quick off his line, denying James Rodriguez, Calvert-Lewin and Sigurdsson. Pickford remains Southgate’s No 1 but good to have options of the quality of Pope and Henderson. #eng #twitterclarets #BUREVE

Pope saved well again to stop Gylfi Sigurdsson late on and secure struggling Burnley a valuable point, the goalkeeper demonstrating he is more than a worthy contender of starting for England at next summer’s European Championships.

Joao Cancelo must rank amongst the most improved players in the Premier League this season, having overcome a difficult debut campaign at Manchester City to become a valuable contributor to Pep Guardiola’s side this time around.

The Portugal international has impressed filling in in a problem position at left-back for much of the season though far, but was handed an opportunity in his preferred position on the right with Kyle Walker rested for the 2-0 win over Fulham at the Etihad.

Cancelo was bright throughout and got forward in customary fashion, linking up with Kevin De Bruyne down the right-hand side and causing problems throughout with his pace and movement.

For all the talk of Liverpool’s injury problems and lack of defensive options at present, the champions continue to pick up results with Sunday’s 4-0 thrashing of Wolves amongst their most impressive of the campaign.

Long-term injuries to both Virgil van Dijk and Joe Gomez have left Joel Matip as the Reds’ sole senior option at centre-back, though the defender has quickly formed a promising partnership with Fabinho at the heart of the defence.

The auxiliary partnership have now kept three consecutive clean sheets when paired together, with Matip enjoying a fine performance to nullify the threat of Wolves’ vibrant attack on Sunday evening.

The 29-year-old helped cover the inexperienced Neco Williams at full-back and scored Liverpool’s third with a powerful header from Mohamed Salah’s cross, keeping Jurgen Klopp’s side level with Tottenham at the top of the division ahead of a meeting between the sides in 10 days time.

5 – Five of Joel Matip's six goals for Liverpool in all competitions have been headed, with five also coming from a corner situation (one free-kick). Target. pic.twitter.com/ChMSFxiYs0

Klopp may look to manage the minutes of the Cameroonian this week given his recent injury record, Matip an important figure in the Reds’ hopes of retaining the title this season.

Toby Alderweireld’s injury was initially expected to sideline the Tottenham defender for a significant period, with his return to the starting side following a three-game absence this weekend a welcome boost to the league leaders.

The Belgium international was hugely impressive as a resolute Spurs secured a 2-0 victory over north London rivals Arsenal, Alderweireld having formed an encouraging partnership with Eric Dier in a deeper defensive line under Jose Mourinho.

The 31-year-old was commanding throughout and made a vital late block to deny Pierre-Emerick Aubameyang, his continued consistency at the heart of the defence helping Spurs to the division’s best defensive record so far this season.

North London is 🤍 Top performance from the team today, made even more special by being back in front of our fans after so long! #COYS pic.twitter.com/V75uIywj7F

Alderweireld incredibly made more clearances (11) than the entire Arsenal team (10), his performances key to the pragmatic approach that continues to deliver results for Mourinho’s side this season.

Andy Robertson continued his impressive start to the season with another complete full-back performance against Wolves, providing a typically indefatigable performance as Liverpool’s outlet down the left.

The Scotland captain won 100% of his tackles in addition to making seven recoveries and creating two chances, dealing with the threat posed by Adama Traore in fine fashion as the champions secured an emphatic victory.

Roberton’s remarkable consistency continues to enhance his claim as the world’s best left-back, a player whose drive and energy is sorely missed on the rare occasion he is absent from the side.

Has there been a better signing in the Premier League this season than Pierre-Emile Hojbjerg?

The Denmark international fulfils the anchor role in our midfield diamond following another superb showing for Tottenham this weekend, a display of tireless tenacity which encapsulates the attributes the midfielder has brought to the Spurs side this season.

Hojbjerg was far from the most fashionable signing of the window but he may just be the most important, a player who has brought leadership and presence to the north London side and drives those around him.

The 25-year-old made three interceptions and regained possession on eight occasions as the defensive screen in front of the Spurs defence against Arsenal, Hojbjerg already amongst Mourinho’s most trusted lieutenants in a side that has shown they can grind out results.

In a world of ever-increasing transfer fees, the £15m fee to sign the midfielder from Southampton looks like brilliant business from Tottenham.

Mason Mount has had his detractors in recent months, particularly the bizarre agenda against the Chelsea midfielder relating to Jack Grealish’s place in the England side.

It’s time, however, to appreciate the performances of a midfielder who is close to undroppable for Chelsea at present, the 21-year-old improving on an almost weekly basis and starring as the energetic heartbeat of the west London side.

Mount was excellent against Leeds and has been a revelation as part of the midfield three this season, providing work-rate, tenacity and creativity to Frank Lampard’s expensively assembled side.

Mount created a staggering seven chances against Leeds at Stamford Bridge this weekend – the most recorded by any Chelsea player in the past five seasons – and provided an assist with a wonderful corner delivery for Kurt Zouma to power home.

Mason Mount created seven chances against Leeds, the most by a Chelsea player in a single PL game this season.

No Blues player has created more in a game across the past five seasons. pic.twitter.com/MxA2QNOMNO

Kevin De Bruyne is the only other midfielder in the Premier League to average two shots, two key passes and two tackles per game this season, the all-action displays of Mount crucial in Chelsea’s recent improvement and unbeaten run.

Kevin De Bruyne has not quite yet reached the extraordinary heights of last season in the opening weeks of the campaign, though this was an encouraging performance from Manchester City’s midfield maestro as they eased to a comfortable 2-0 victory over Fulham.

De Bruyne provided the assist for Raheem Sterling’s opener with a signature driving run and perfectly weighted pass, before slamming home a second from the penalty spot after Sterling had been brought down.

The Belgian was at the hub of City’s best passages of play and moved to eight goal involvements in just eight Premier League starts so far this season, a reminder that the 29-year-old is largely without equal in this division and can decide fixtures whilst still in second gear.

It’s now a huge 62 assists in the Premier League for De Bruyne since the start of the 2016/17 season, 23 more than any other player.

Bruno Fernandes’ importance to Manchester United has been well-documented since his arrival into the Premier League, but perhaps has never been more visibly apparent than this weekend’s win at West Ham.

Ole Gunnar Solskjaer had hoped to rest the midfielder and left Fernandes on the bench ahead of a crucial midweek clash with RB Leipzig in the Champions League, only to call upon the services of the Portugal international at half-time following a lacklustre showing from his side.

Trailing 1-0 at the time of his introduction, Fernandes helped transform United’s fortunes as they came from behind to win, creating a huge eight chances and providing the assist for Paul Pogba’s equaliser.

That haul was the most chances created from open play by any player in the Premier League so far this season, despite Fernandes featuring for just 45 minutes at the London Stadium.

He was on the pitch for just 45 minutes. 🤯 pic.twitter.com/F5kfFbsDOd

It’s difficult to argue that any side in the division is as reliant on one player as the Red Devils are with Fernandes at present, the catalyst for their win this weekend and a star they can seemingly ill-afford to be without.

Crystal Palace scored five times away from home in the top flight for the very first time this weekend, thrashing 10-man West Bromwich Albion 5-1 at The Hawthorns.

Roy Hodgson’s side were boosted ahead of the clash by the return of talismanic forward Wilfried Zaha following a two-game absence, with the Ivorian at his sparkling best to dismantle the struggling Baggies.

Zaha created the opening goal of the game as his dangerous delivery was turned into his own goal by Darnell Furlong, before curling home a superb second to put Palace back in front after Conor Gallagher had equalised for the home side.

The 28-year-old turned home his second following an impressive run from Eberechi Eze, taking his tally to seven goals in just nine Premier League appearances so far this season and providing a reminder of his importance to the Eagles.

Where would Crystal Palace be without @wilfriedzaha? 👏

Eze and the two-goal Christian Benteke also deserve mentions for their showings in a thumping Palace win, but Zaha – as so often is the case – was the undoubted star for the rampant visitors.

Another week, another wonderful centre-forward performance from Harry Kane, who once again proved the difference for league leaders Tottenham.

It was a familiar duo that helped Spurs to victory in the north London derby, as Kane and Son Heung-Min provided the inspiration for Jose Mourinho’s side at the Tottenham Hotspur Stadium.

The England captain incredibly provided his 10th assist of the season to set Son racing away for a stunning opening goal, before the South Korean returned the favour as Kane lashed in a second to put Spurs in control.

Harry Kane is a JOKE. 😳 pic.twitter.com/VMXNnYtLbb

Kane led the line superbly and provided his side with an outlet in attack, whilst his importance defensively was once again evident as he provided a presence in his own penalty area at set-pieces.

Kane has now provided a staggering 18 goals involvements in just 11 league fixtures so far this season, his partnership with the equally impressive Son having fired Spurs into title contention.