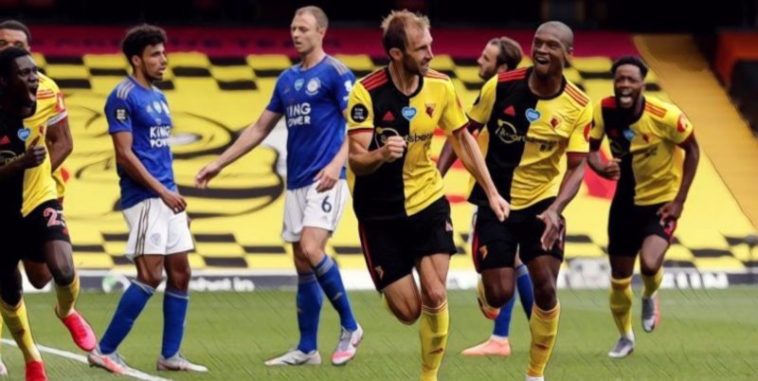 The Premier League has finally made its long-awaited return behind-closed-doors and whilst atmosphere may be lacking, there was no shortage of the usual drama and tension during the weekend’s fixtures.

Brighton heaped further misery on Arsenal with a late victory which could prove crucial to their hopes of survival, while Chelsea and Wolves boosted their hopes of securing Champions League football with victories at struggling Aston Villa and West Ham respectively.

After a long absence, it’s that time of the week again when we put together our dream XI from the week’s action, here is The Football Faithful’s Premier League Team of the Week:

Manchester City returned to action with a comprehensive win over Arsenal in mid-week, a comfortable evening at the Etihad largely boosted by David Luiz’s one-man capitulation for the Gunners.

Ederson may have had busier nights in terms of shots saved, but the Brazilian provided a reminder of the unique qualities he brings to Pep Guardiola’s defending champions.

City largely play out from the back but possess an unstoppable weapon in the shape of their playmaking goalkeeper, whose pinpoint long-range passing is arguably the finest – of any player – in the division.

Arsenal were given their first warning with a stunning pass into the path of Riyad Mahrez to send the Algerian through on goal, before another perfect diagonal to the same player saw the winger brought down for a penalty.

The 26-year-old remains indispensable to City and Guardiola’s style of play, the goalkeeper remarkably completing more passes than any Arsenal player.

He maybe had some flashier long range balls yesterday but I can't get over this pass from Ederson. Under pressure and standing nearly on his goal line and still breaks three lines like it's nothing. The speed of his pass also suggests that he deliberately aimed for Sterling. pic.twitter.com/QDhJFyB9rK

Chelsea‘s ever-dependable Spaniard was tasked with nullifying Jack Grealish’s influence ahead of their trip to face relegation-threatened Aston Villa, and the full-back excelled at both ends of the pitch in what may prove a crucial result for Frank Lampard’s side.

The club captain forced Grealish backwards with his surging runs forward, combining brilliantly with Willian to create overloads down the right-flank and providing several superb crosses for his side.

Azpilicueta delivered a huge 11 crosses throughout the 90 minutes at Villa Park, providing assists for both Chelsea goals as the west London side came from behind to secure all three points.

A captain’s display from Dunk as Brighton gave themselves some much-needed breathing space away from the Premier League’s drop zone, snatching a late victory against Arsenal to move five points clear of the relegation places.

Dunk was excellent defensively and produced a brilliant block to deny Alexandre Lacazette in the first-half, before showing greater desire than Arsenal’s defenders to bundle home an equaliser after Nicolas Pepe’s opener for the Gunners.

The 28-year-old will need to continue producing performances like this if Graham Potter’s side are to survive, the Seagulls facing a difficult run-in with four of the current top five in their next five fixtures.

Watford’s clash with Leicester in Saturday’s early kick-off seemed like a largely forgettable contest until a dramatic final few minutes. Firstly Ben Chilwell scored what looked like a 90th minute winner with an unstoppable effort from distance, before Craig Dawson salvaged a point deep into stoppage time for the Hornets.

The defender produced an innovative piece of skill to equalise with a 95th minute overhead kick, rescuing a draw for Watford which leaves Nigel Pearson’s side just a point outside the drop zone.

Dawson has regularly provided a goal threat from centre-back and has now scored an impressive 42 goals across his senior club career, though none quite like this acrobatic effort.

From one sensational effort to another, Chilwell earns his inclusion in our side courtesy of a blistering strike to open the scoring for Leicester at Vicarage Road, the England international rifling his effort into the top corner and past the helpless Ben Foster.

The 23-year-old must surely have thought his postage-stamp effort had secured all three points, though will no doubt have been pleased to score his third goal of the Premier League campaign as Brendan Rodgers’ Foxes edge closer to securing a place in next season’s Champions League.

A great strike from the England full-back. Ben Foster didn't have a chance!#PLReturns pic.twitter.com/4NKYvjKgGm

Wolves remain firmly in the hunt for Champions League football and returned to action with victory at West Ham, leaving it late to break the home side’s resistance and move up to sixth in the division.

Key to their success, as ever, was midfield conductor Ruben Neves, the Portuguese international dictating the pace of the game, covering the ground and spreading trademark diagonal passes to the likes of the marauding Matt Doherty.

Neves’ natural ability belongs amongst Europe’s elite and the 23-year-old will hope that can be achieved at Molineux next season, Wolves just five points adrift of the top four and facing winnable-looking fixtures against Bournemouth and Aston Villa in their next two games.

Even a rusty-looking Kevin De Bruyne was good enough to help dismantle Arsenal at the Etihad, the Belgian’s pass – with a helping hand from the error-prone David Luiz – releasing Raheem Sterling for the opener before stepping up confidently to score City’s second goal from the penalty spot.

Liverpool’s incredible season means a host of their players are leading the chase for the PFA Player of the Year award, though it is difficult to argue that any player has been better than De Bruyne this season.

Thierry Henry’s long-standing record for assists in a single season may not last beyond the end of the current campaign, De Bruyne’s sensational form meaning no player has been selected in this feature on more occasions so far this season.

Back with a bang! pic.twitter.com/rSVNI4PKxT

Steve Bruce’s long-term future at Newcastle may be uncertain amid continued takeover talks at St James’ Park, but the unpopular appointment has proven to be a shrewd one following his work with a limited side so far this season.

Sunday’s 3-0 victory over 10-man Sheffield United moved the Magpies 11 points clear of the relegation places, with Newcastle now closer to the European places after securing three points against the Blades.

A largely pragmatic side has been boosted by the effervescent talents of Allan Saint-Maximin this season, the winger an electric presence and difficult to contain when operating in full flight.

The Frenchman’s end product has been questioned on occasion despite his scintillating showings, but there were positive signs for a player growing in confidence after he opened the scoring and played a pivotal role in Newcastle’s third goal of the afternoon.

A performer, even behind closed doors. 🤹‍♂️ pic.twitter.com/S2rHKSqPmH

Southampton seem all but safe following their third victory in their past five Premier League fixtures, Ralph Hasenhüttl’s side now 10 clear of the drop zone following a 3-0 thrashing of bottom club Norwich.

It was a former Norwich player who came back to haunt the Canaries in some style, Redmond a lively presence from the off as the home side struggled to cope with his pace and direct style.

The break in the season has allowed the 26-year-old to recover from injury and the Saints reaped the full rewards of his return to fitness here, Redmond capping a fine individual display with his fourth league goal of the campaign.

Ask any Crystal Palace fan and they would have largely pointed to the form of Wilfried Zaha as being key to their hopes this season, but the Eagles have seen an unlikely talisman emerge in the form of Jordan Ayew.

Ayew registered his ninth goal of the season in the 2-0 win at Bournemouth, scoring in three successive fixtures either side of the league’s suspension and moving ahead of Tony Yeboah as the highest-scoring Ghanian in Premier League history.

His selfless style and ability to drop deep and link the midfield has been fundamental to the Eagles’ success this season, Roy Hodgson’s side now remarkably in contention to secure European football after securing a fourth consecutive league victory.

Danny Ings’ best ever Premier League season continued with a fine finish in Southampton’s win at Norwich, the forward registering his 16th goal of the campaign at Carrow Road.

It was difficult to tell there had been a three month hiatus to the campaign based on Ings’ energetic display, the Southampton number nine typically industrious in his work-rate and pressing play.

No player has scored more non-penalty goals in the Premier League so far this season than Danny Ings (16).

Straight back to business. pic.twitter.com/y9Ggjh7bnU

Ings’ opener against the Canaries moved him level with Mohamed Salah and Sergio Aguero for league goals this season, and just three short of Jamie Vardy in the race for the division’s Golden Boot.

The Saints’ striker’s prolific season has been a feel-good story of the campaign given his nightmare spell with injury at Liverpool, and the 27-year-old must surely be in Gareth Southgate’s thoughts for England as he looks to add to his sole senior cap won five years ago.