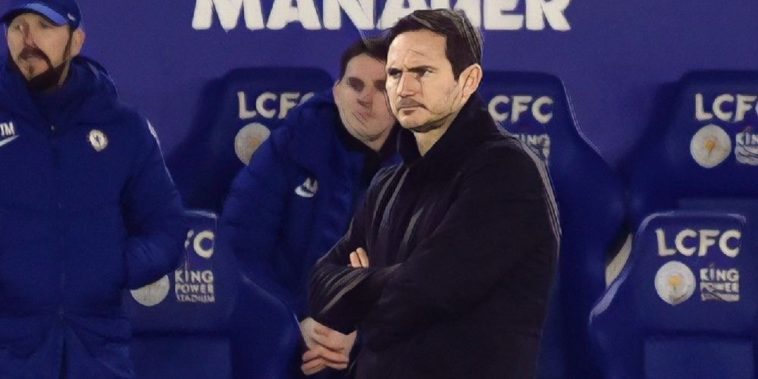 Chelsea have started ‘identifying possible replacements’ with Frank Lampard ‘clinging on’ to his position following the club’s concerning run of form.

Lampard has come under increasing pressure following a difficult period for the west London side, Chelsea having lost five of their past eight league fixtures following a 2-0 defeat at top four rivals Leicester on Tuesday.

A poor run of results has left Chelsea in ninth in the Premier League and the Blues could find themselves eight points adrift of the Champions League places should Liverpool beat Burnley this evening, their faltering fortunes having placed Lampard in a precarious position.

According to the Guardian, the club’s hierarchy have already begun discussing a contingency plan in the event that results do not immediately improve, with reports this week having suggested Chelsea will ‘likely’ look towards a German-speaking boss as Lampard’s replacement.

RB Leipzig coach Julian Nagelsmann has been linked but is unlikely to be available until the end of the season, whilst Ralf Rangnick has been speculated as a potential short-term appointment to steady the ship.

There are, however, concerns over Thomas Tuchel despite the German’s reported interest in the position with reservations over the 47-year-old’s ability to work in a defined club structure following his struggles at Paris Saint-Germain.

Southampton’s Ralph Hasenhuttl has been suggested as another potential candidate for the role following his impressive spell on the South Coast, whilst Max Allegri – although not German speaking – has also been linked with a move to the Premier League having been without a club since calling time on a trophy-laden spell at Juventus.

A decision over Lampard’s future is not understood to be imminent, but the Chelsea board will want to see instant improvement ahead of a winnable set of fixtures, the west Londoners facing Luton in the FA Cup fourth round this weekend before Premier League clashes against Wolves and Burnley at Stamford Bridge.