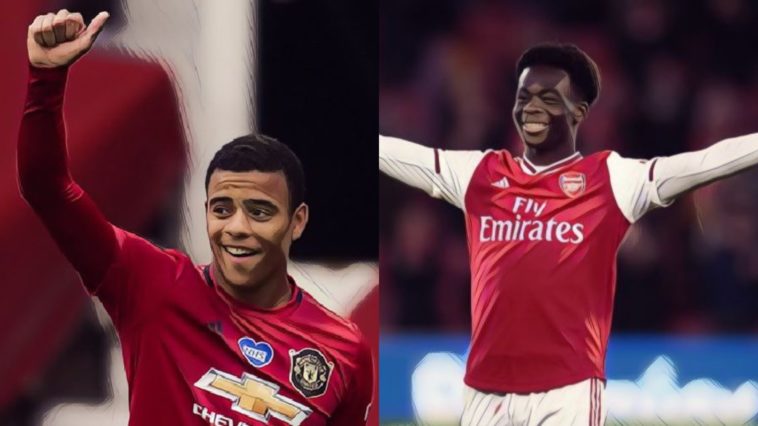 Presenting some of the standout statistics from gameweek 32 of Premier League action, featuring the teenage sensations taking the top flight by storm, Jamie Vardy the late bloomer, and John Egan masters every division.

The next big thing

Every now and again a precocious young talent comes along that gets everyone as giddy as a middle-aged divorced man waiting for the pubs to reopen at 6AM on 4 July, and this season that player is Mason Greenwood.

The Manchester United forward scored twice against Bournemouth at the weekend, helping his side to a 5-2 win over the Cherries at Old Trafford – the first time they’ve scored five at home since 2011.

Greenwood has equalled Romelu Lukaku’s tally from last season by scoring 15 goals, eight of which have come in the Premier League, while he has also scored in every competition the club have entered in 2019/20 – and he’s only 18-years-old.

Greenwood’s league tally is also the most by a player aged 18 or under since Wayne Rooney’s nine in 2003-04, and he’s also the first teenager to score 15 goals for United since the 17 scored by, you guessed it, Wayne Rooney in 2004/05. Who would bet against him beating both those totals by the end of the season?

Judging by the expected goals numbers, he’s currently scoring at a rate that is, in all likelihood, unsustainable – both Anthony Martial and Marcus Rashford both overperformed in this department before their returns evened out – with his eight league goals coming from 2.7xG. His brace against Bournemouth also came from his only two shots in the match, but it does seem as if he has a knack for converting quite difficult chances.

If his career is anything like Rooney’s, then United fans won’t have much to worry about. At the moment they won’t be too concerned with that anyway, as their side’s frontline is on absolute fire. The 55-goal haul between the trio of Greenwood, Rashford and Martial is four more than that of Liverpool’s much-vaunted front three.

Another prodigious footballer who has burst onto the scene this season, Bukayo Saka has been a real bright spot amidst all of the farce and bullshit at Arsenal.

The 18-year-old scored his first league goal in the 2-0 win over Wolves on Saturday, making him the second youngest English goalscorer from the north London club to find the net in the Premier League after Alex Oxlade-Chamberlain, who opened his account against Blackburn Rovers in February 2012.

The goal, which was the first that Wolves had conceded in 447 minutes, was his 13th goal involvement in all competitions this season and contributed to a third consecutive win for Arsenal, a run that has seen them score eight goals and concede none. In that time they also defeated Sheffield United 2-1 to reach the FA Cup semi-finals.

Saka is a natural wide attacker, creating opportunities for teammates on the flanks and bursting into the box to make chances for himself too. But he has also been deployed as a wing-back on several occasions by Mikel Arteta, looking very assured while doing so, demonstrating a level of versatility that bodes well for his development. Now that Kieran Tierney has returned from injury to take his place at full-back, the two have already struck up an understanding, the Scot setting up Saka for the game’s opener.

It was a particularly good weekend for the teenager, who only signed a new long-term contract last week. On top of that, according to The Athletic, England manager Gareth Southgate is considering bringing Saka, as well as Greenwood, Phil Foden and Dean Henderson, into the national team fold. It would be just reward for the terrific campaigns these players have had so far.

Jamie Vardy became the latest player to join the 100 club after scoring a brace at the weekend for Leicester City, bringing his top flight tally to 101. The most remarkable thing about that achievement is the fact that he didn’t make his debut in the first tier until he was 27 – the only other player to have reached that milestone and debuted in the Premier League at a later age was Ian Wright.

After going on a major hot streak in the first half of this season, Vardy suffered through an arid dry spell in which he scored just twice between late December and July – and both of those goals came against Aston Villa just before the league was suspended. He had gone more than six hours of play without a goal before the game kicked off.

Despite his difficulties in front of goal, the Englishman never stopped trying his damndest to find the net, as evidenced by Saturday’s performance. No player in the league took more than the striker’s six shots against Crystal Palace, and when it looked it like it was going to be another one of those days his persistence paid off when Harvey Barnes set him up for his easiest finish of the campaign.

Vardy then followed that up with a vintage run behind the defence before deftly lifting the ball over Vicente Guaita in the Palace goal and into the net. He’s now back on top of the scoring charts with 21 goals, two ahead of Arsenal’s Pierre-Emerick Aubameyang.

🎮 Goalscoring – it's all just a game to @Vardy7 🎮#VardyPL100 pic.twitter.com/dMcg9oawGR

John Egan scored the first Premier League goal of his career after finding the net against Burnley at the weekend, leathering the ball with a perfect connection to see it fly past Nick Pope.

It really illustrated the Kerryman’s tremendous rise in the sport over the years as well, as it meant he has now scored in each of the top four tiers in English football. Not bad for a centre-back!

4 – John Egan has now scored in each of the top four tiers in English football, with today's strike coming 2308 days after the first of these goals in March 2014 (for Southend in League Two). Rise. #BURSHU pic.twitter.com/j7AxLpdTV1