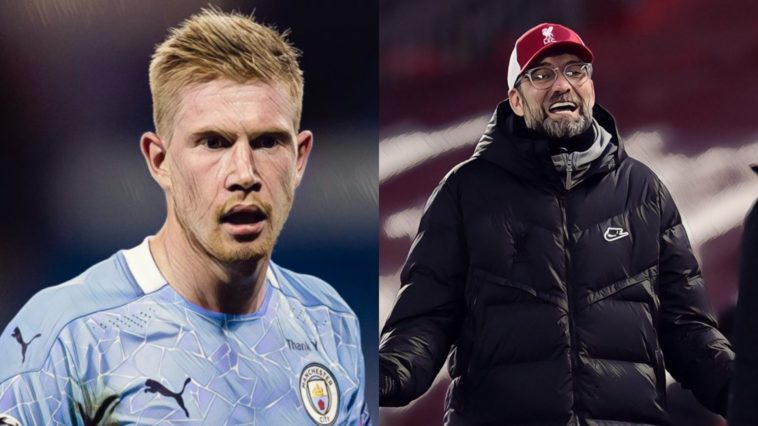 De Bruyne reaches yet another milestone for resurgent Man City

A 4-0 win over Crystal Palace pulled Manchester City into third place in the Premier League table and catapulted them back into the title conversation. Pep Guardiola’s charges are now just one point behind their neighbours Manchester United after winning five consecutive games, the first top flight side to do so in 2020/21.

We have become accustomed to City bashings since Guardiola arrived, but this is just the fourth time they beaten an opponent by three or more goals in a game this season. Their tactical approach explains some of the reason behind that, but the lack of a fit or in-form central striker is certainly a big part of it.

Man City have spread the goals around with nine different scorers for 29 strikes, but none of them have found the net more than five times. Raheem Sterling became the club’s top scorer with a magnificent free-kick, but it was John Stones who stole the show against the Eagles.

The centre-back scored his first brace, tripling his Premier League tally in one go, and finally getting his first league goals for City. Incredibly, the defender has now scored as many goals this season as the team have conceded while he’s been on the pitch (as per Richard Jolly).

John Stones accumulated more xG against Crystal Palace this evening (0.74) than he did in the previous two seasons combined (0.70).

Stones’ opener was set up with a delicious cross from Kevin De Bruyne, which was incidentally his 100th assist in all competitions for City.

Since the Belgian’s debut in September 2015, De Bruyne has at least 39 more assists than any other City teammate. Sterling is the closest on 61, while David Silva (54), Leroy Sané (42), and Bernardo Silva (33) follow behind.

It was also De Bruyne’s 75th assist in the Premier League, moving him one past Thierry Henry in the all-time list. He has now made 10 or more assists in a league season on five occasions while playing in the top five European leagues, only Lionel Messi has managed it on as many occasions.

Since his Man City debut in Sept 2015, he has provided 32 more assists for a PL club than any player in that time (next – Eriksen, 68) pic.twitter.com/CyeRBNQORJ

Liverpool and Man United serve up another no-score draw

We can officially say that Liverpool are experiencing a drought, as they failed to score for a third league game in a row when their clash with Manchester United ended in a goalless draw. This is the third time the two rivals have drawn 0-0 at Anfield in the past five seasons, as many times as in the previous 48 top-flight campaigns.

Equally worrying for the Reds is the fact that they haven’t won in four since trouncing Palace 7-0 in December. However, they did extend their unbeaten home run to 68 matches, moving them to 18 matches behind Chelsea’s record.

Liverpool have failed to score in three consecutive league games for the first time since March 2005. pic.twitter.com/Kao6Apdra0

Man United are now unbeaten in their past 16 away matches in the Premier League (W12 D4), their second-longest run without a defeat on the road in the competition. They went 17 away games undefeated in 1999.

United supporters were left frustrated by Marcus Rashford’s inability to stay onside, however. The forward was caught offside five times in this match, the most of any Premier League player this season and the most by a United player since Robin van Persie (six) against Spurs in January 2013.

This was also Jürgen Klopp’s 100th Premier League match at home since joining the club in 2015. Klopp’s Anfield record reads: 72 wins, 24 draws and a miserly four defeats, while his side have scored 246 goals and conceded 78. This was their 45th clean sheet under his watch.

Chelsea get back on track with a familiar scoreline

They used to chant “one nil to the Arsenal” on the terraces about George Graham’s fastidiously defensive outfit back in the day, but perhaps it would be more fitting to apply to Chelsea.

Following their defeat of Fulham on Saturday, the Blues have now won 131 Premier League games by a 1-0 scoreline, the most common winning score for a single team in the competition’s history.

Chelsea extended their impressive record against their SW6 rivals, having lost just one of their 29 Premier League meetings with Fulham (W18 D10). They remain unbeaten in their last 19 against the Cottagers in the competition.

As for Fulham, this added to their woes against local rivals in recent years. They have failed to win any of their last 19 Premier League London derbies since a 2-1 win over West Ham in January 2014. They have drawn two and lost 17 of those matches.

See Also: The most head scratching results of the Premier League season so far