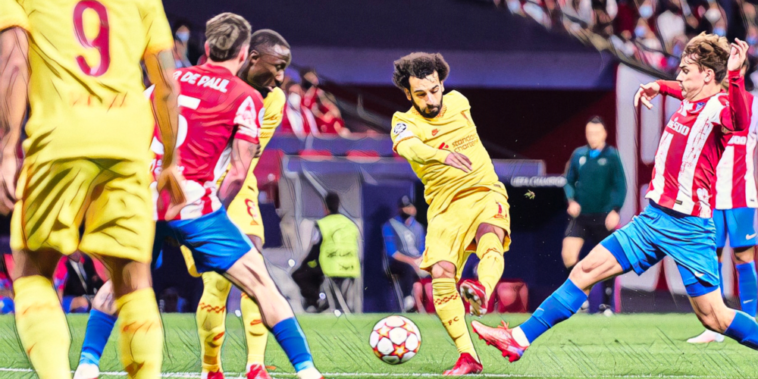 Liverpool made it three wins from three in their Champions League group with a hard-fought 3-2 win over 10 man Atletico Madrid.

The two sides have a fair bit of previous in recent seasons, with the most recent meetings seeing Atletico knock the then Premier League leaders out at the last-16 stage of the 2019/20 edition, a game that saw a frustrated Jurgen Klopp accusing Diego Simeone’s side of not playing ‘proper football’ given their pragmatic style.

Mohamed Salah had come into the game in simply scintillating form, and the Egyptian continued his hot streak, skipping past three men as he drifted in off the right, before firing into the bottom corner, though his strike did take a crucial deflection off Geoffrey Kondogbia to leave Jan Oblak with no chance.

Simeone’s side are often notoriously difficult to break down, but Liverpool made it look like men against boys in the opening stages, looking far sharper and slicker than their Spanish counterparts, and in the 12 minute they doubled their lead. Trent Alexander-Arnold floated a ball into the box that was poorly cleared by the Atletico defence, dropping to Naby Keita on the edge of the area who despatched a fine curling volley beyond the reach of Oblak and into the top corner.

Los Rojiblancos looked really off the pace in the opening stages, though would pull a goal back in the 20th minute with their first real foray forward. Thomas Lemar skipped past Keita far too easily before finding Koke on the edge of the box, before the Spaniard’s side-footed effort was turned home by Antoine Griezmann from close range.

That goal really changed the tide of the game and it was the Spanish champions who then looked by far the more threatening, and they hauled themselves level with 10 minutes to play before the interval. Joao Felix kept possession of the ball despite being surrounded by three Liverpool defenders, before the Portuguese slipped it into Antoine Griezmann who found a pocket of space that had been vacated by Joel Matip before finishing smartly past Alisson into the bottom corner.

However, the former Barcelona man would be given his marching orders just six minutes after the interval, being shown a straight red card for a high boot that unintentionally caught Roberto Firmino in the side of the head as he tried to control the ball.

The moment Antoine Griezmann trudged past Jurgen Klopp after receiving a straight red card just minutes into the second half.

Despite the man advantage, Liverpool still didn’t really look too threatening, though would be gift-wrapped an opportunity to restore their lead as Mario Hermoso inexplicably brought down substitute Diogo Jota in the box, before Mo Salah stepped up and netted his second of the evening from the spot, sending the Slovenian ‘keeper the wrong way.

Referee Daniel Siebert found himself pointing to the spot once more just five minutes later after Jota appeared to have brought Jose Maria Gimenez from a free-kick, only for the German to overturn his own decision after a lengthy deliberation with VAR and a viewing of the pitchside monitor.

Angel Correa would waste a chance in stoppage time as he blazed over the bar as Liverpool secured a valuable three points, and speaking afterwards, Jurgen Klopp admitted he was surprised with how defensive Atleti started the game.

“A tough game which we expected,” he told BT Sport. “We did surprisingly well at the beginning. Did we expect it to be that defensive? Probably not. It was not so easy. We scored two wonderful goals then played good football. It was 2-0 then obviously Atletico are not too bothered about having possession.

“The first goal we gave away then the second, it was nice play, but the gaps we had there…that was not alright. At half time I think everyone in the stadium thought it was only going one way and we thought ‘let’s give it a proper try again’.

“We played a really solid second half in a tough game with intense football from both teams. We got the penalty, then there was a red card and obviously, it was in our favour.”

Asked about what swung the momentum of the tie in Atleti’s favour, Klopp was critical of his side choosing the easy pass as opposed to trying to play between the lines.

“They just won the balls and we didn’t do the right stuff anymore. We chose the easy pass but we needed to play between the lines. The last line was pretty deep. Then they came with wing-backs and midfielders and we stayed there instead of accelerating. The game was too slow and that was what they wanted. That was why the momemtum changed.

“I saw it and our penalty is a penalty. I think the other one is not a penalty but I didn’t expect it. I think it’s the right decision. The red card was for sure unlucky but it is a red card. A foot in the face. It can happen. It was a tough game. Honestly, how we win it, I couldn’t care less! The dirty ones are the really important ones. On a night like this, getting three points is really nice.”

After the game, Diogo Simeone bolted straight down the tunnel and snubbed Klopp’s offer of a handshake, though the German played down the situation.

No handshake between Simeone and Klopp as the Reds edge Atletico in a five-goal thriller! 😮‍💨

“We don’t like that but yes the situation is clear. I want to shake his hand. His reaction for sure, like mine, was not so cool. The next time we see each other we will shake hands definitely. It’s nothing. He was obviously angry, not with me but with the game. There is nothing else.”

The result, coupled with Porto’s 1-0 win over Milan, means Liverpool are already five points clear at the top of Group B with three games still to play.

Next up, they head down the East Lancs road to take on a massively out-of-sorts Manchester United on Sunday.