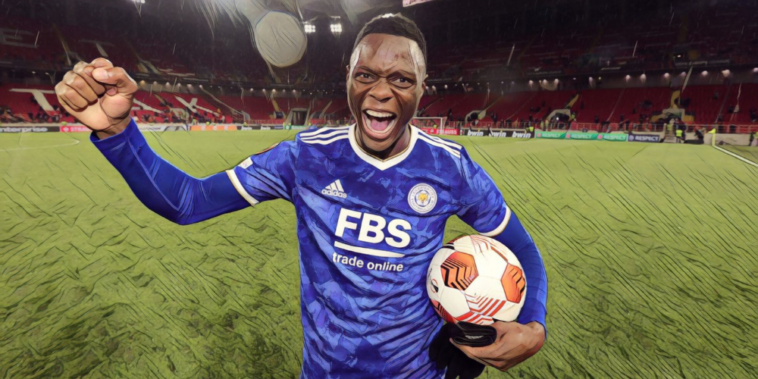 Patson Daka stole the show as Leicester completed a brilliant Europa League comeback against Spartak Moscow this week, the forward scoring all four goals in the Foxes’ 4-3 win in Russia.

It was a stunning performance from the Zambia international, who showcased his goalscoring quality with an electric individual performance to seal three points for Brendan Rodgers side.

Daka became just the fifth player to score four or more goals in a Europa League game since the competition’s rebranding in 2009, and following his devastating display we’ve decided to look back and appreciate the players to have achieved the feat.

Rewind a decade ago and the Europa League belonged to one man, the formidable goalscoring genius of Radamel Falcao.

The early incarnations of the rebranded competition saw El Tigre terrorise defences, winning back-to-back trophies with Porto and Atletico Madrid in 2011 and 2012.

The first of those saw Falcao enjoy the most remarkable individual campaign the Europa League has witnessed, scoring a staggering 17 goals as the Portuguese side claimed the trophy – including the final winner against compatriots Braga in Dublin.

His finest individual performance came in the semi-final first leg against Villarreal, where – after falling a goal behind on the stroke of half-time – a Falcao-inspired Porto roared back to claim a comprehensive advantage.

The Colombian scored four times to seal a 5-1 win for Porto, adding to the hat-trick the forward scored during the quarter-final first-leg win against Spartak Moscow.

Edinson Cavani became the second player to score four times in a Europa League fixture in 2012, the Uruguayan’s brilliance rescuing Napoli during a thrilling tie against Dnipro.

The Italian side had lost two of their opening three fixtures in Group F and were in danger of an early exit, as group leaders Dnipro came from a goal down to lead 2-1 at the Stadio San Paulo.

Cavani had scored an early opener and netted an equaliser with 13 minutes remaining with a brilliant free-kick from distance, before sealing his hat-trick and three points for Napoli from close range.

There was still time for a fourth in stoppage-time, the forward pouncing on a bouncing loose ball before firing home a dipping effort.

Four goals is no doubt impressive, but scoring five in one game is truly something special.

Artiz Aduriz is the only player in Europa League history to have scored five times in a single fixture, netting all five goals as Athletic Bilbao beat Genk 5-3 in an eight-goal thriller.

Three of Aduriz’s efforts came from the penalty spot in an enthralling contest, with the 35-year-old becoming the first Spaniard since 1971 to score five goals in a European fixture.

He also became the first player since Fabrizio Ravanelli in 1994 to score five goals in a UEFA Cup/Europa League game, the former Juventus forward having achieved the feat against CSKA Sofia.

Jose was, however, the first player to score four or more goals in an away Europa League fixture, having scored four times as Real Sociedad ran out 6-0 winners over Macedonian side Vardar Skopje in 2017.

Jose’s first three goals came as a perfect hat-trick from right foot, left foot and head, his second a sweetly-hit driven effort from just outside the penalty area.

He slammed home a fourth to make it four goals before the hour mark, as Sociedad outclassed their overwhelmed opposition to secure an emphatic win on the road.

Patson Daka has had to be patient for his opportunity at Leicester following a summer arrival from Red Bull Salzburg, the presence of Jamie Vardy and Kelechi Iheanacho at the King Power Stadium having seen chances limited.

He seized his chance this week, however, following a finishing masterclass in Moscow.

Daka scored 27 goals in just 28 league appearances for Salzburg last season and showcased his clinical touch on a memorable night, scoring four time to turn a two-goal deficit into a 4-2 lead for Leicester.

His first arrived on the stroke of half-time after being played in by Kelechi Iheanacho, before the duo combined once more to provide the Zambian with a tap-in from close range.

Daka raced away to score his hat-trick after being freed by Youri Tielemans and made it four on the night with another fine finish on the counter-attack for Brendan Rodgers’ side.

His initial hat-trick – coming across just nine minutes either side of half-time – is the fastest treble ever recorded in the Europa League.

The 23-year-old also netted his first league goal at the weekend before his four-goal blitz of Spartak, with Daka looking like the perfect player to eventually succeed the evergreen Vardy as Leicester’s talisman.