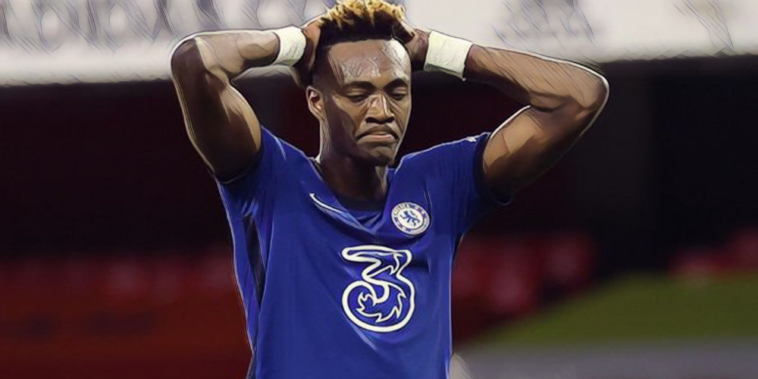 The 2020/21 Premier League is now just weeks away but as we prepare for the season’s opening fixtures there remains plenty left to be sorted in the transfer market.

It’s been a fairly quiet window of transfer activity given the ongoing implications of the pandemic, though there will be several stars desperately hoping they can secure moves and a fresh start after difficult periods last term.

We’ve decided to look at six Premier League players who need to secure a transfer before the window’s closure.

Tammy Abraham’s future has dominated the headlines over the summer so far, with the forward having endured a frustrating period after failing to convince Chelsea manager Thomas Tuchel.

Abraham honed his talents during several successful loan spells away from Stamford Bridge, before being handed his opportunity under Frank Lampard during the 2019/20 season – finishing as the west London side’s leading scorer with 18 goals in all competitions.

Abraham enjoyed another impressive season in front of goal last term, scoring 12 goals in just 18 starts to finish as Chelsea’s leading scorer for a second successive season, finishing level with Timo Werner despite making 20 less appearances than the summer signing.

However, the arrival of Tuchel as Lampard’s successor in January led to a sharp downturn for Abraham, who featured for just 140 minutes in the Premier League following the German’s appointment.

Abraham was left out of the Chelsea squad for their Champions League final win over Manchester City and his lack of opportunities prevented him from staking a claim for England’s Euro 2020 squad.

Interest in the 23-year-old is high and there’s an acceptance that a transfer is a matter of when and not if, with Arsenal reportedly leading the likes of Tottenham, West Ham and Aston Villa for the forward’s signature.

Chelsea’s £40m asking price may be prohibitive in the current market however and a compromise could be needed before Abraham secures the regular first-team football he has been denied in recent months.

Divock Origi’s cult status at Liverpool is secured following some memorable moments at Anfield, a penchant for Merseyside derby goals and his role in the Reds’ 2019 Champions League success securing his legacy.

Now appears the right time for Origi to move on, however, following large spells without regular football last season.

The Belgium international has proven a useful option off the bench in recent seasons, but has largely failed to show he can be an established member of the starting side amid the presence of Liverpool’s first-choice front three.

The 26-year-old started just two league fixtures in 2020/21 and has been linked with several Premier League sides, the likes of Leeds and West Ham amongst those thought to be considering moves for a player who would likely cost between £15m and £20m.

Origi has scored 19 league goals in 100 appearances since signing for Liverpool from Lille, though only 34 of those have come from the start with the Belgian a regular plan B off the bench.

It’s easy to forget that Phil Jones is still a Manchester United player, having not been seen in a red shirt since scoring in a 6-0 win against Tranmere in January 2020.

Jones’ recent career has been ravaged by injury and a player once tipped to become a club great by Sir Alex Ferguson has faded into obscurity, though the defender returned to training in April as he works his way back to full fitness following his latest injury issue.

The 29-year-old appears unlikely to be able to force his way back into the Red Devils’ side however, whilst the potential signing of Raphael Varane will only force the 27-cap England international further down the pecking order.

After a decade at Old Trafford a fresh challenge shapes as the best option for Jones this summer, though finding a suitor could prove difficult given the centre-back has two years remaining on a lucrative contract.

Jones’ injury record – once which has reportedly seen him miss 204 games across his ten seasons with the club – will also see sides approach with caution, but a cut-price deal could suit a side seeking defensive reinforcements.

After seeing the best years of his career ruined by fitness problems, it’s time for club and player to cut their losses as Jones bids to reignite his fortunes.

A new manager can often mean a fresh slate for players, but the arrival of Nuno Espirito Santo at Tottenham appears to have done little to improve Harry Winks’ prospects of regular starts.

Winks rose through the academy ranks at the north London side and broke into the Englands squad following his performances for Spurs, but has seen his progress stall after falling out of favour under Jose Mourinho last season.

The 25-year-old started just nine league fixtures, with the summer signing of Pierre-Emile Hojbjerg providing a significant obstacle in his pathway to first-team football.

Winks’ technical ability and comfortability in possession will make him a transfer target for Premier League rivals with Everton, Aston Villa and Crystal Palace linked with the midfielder.

After spending much of last season warming the dug-out at the Tottenham Hotspur Stadium, a fresh start could provide Winks with the platform he needs to challenge the likes of Kalvin Phillips and Declan Rice for a place in Gareth Southgate’s plans.

It seems almost every summer we’re found discussing Ross Barkley and a career at a crossroads.

Having emerged as a bright hope from the Everton academy system, a move to Chelsea – designed to provide the star with higher platform – failed to work out as hoped as Barkley struggled to cement himself in the side.

Deemed surplus to requirements last summer, he signed for Aston Villa on a season-long loan deal, but the Midlands outfit opted against making the deal permanent as a bright start faded fast.

Barkley’s opening performances for Villa caused great excitement as he formed a fine understanding with Jack Grealish, but he suffered a sharp downturn following a hamstring injury and became a target for criticism following a series of ineffective displays.

His indifferent spell at Villa Park now leads Barkley awaiting another side to gamble on his services, but a continued struggle to turn quality into consistency has left the 27-year-old short of suitors to date.

Newcastle are the latest side reportedly interested in the midfielder, whilst former Everton boss David Moyes has been linked with a potential reunion with Barkley at West Ham.

Just two years ago Barkley was a regular member of Gareth Southgate’s England squad, with only Harry Kane and Raheem Sterling scoring more goals in qualification for Euro 2020.

After an underwhelming period he is now seeking a fresh start after becoming a forgotten man amongst the Three Lions’ creative midfield options.

The ability to play in multiple positions is a dream for any manager, but players can often become victims of their own versatility.

Ainsley Maitland-Niles is perhaps case and point, have struggled to find his role at Arsenal after being utilised in various roles, featuring on both flanks despite an expressed desire for a central midfield position.

Maitland-Niles’ performances at wing-back saw him break into the England set-up and earn five caps in 2020, though he found himself out of the international picture following a loan spell at West Brom last season.

The loan move provided the 23-year-old with regular minutes in midfield, though questions remain over where the star is best suited to the central position or one out on the flanks.

Whilst it must be acknowledged he featured in a side heading towards relegation, Maitland-Niles failed to set the world alight at West Brom and his performances paled in comparison to fellow Arsenal loanee Joe Willock at Newcastle.

If the academy graduate is determined to forge out a career in midfield, it looks set to be one away from the Emirates.