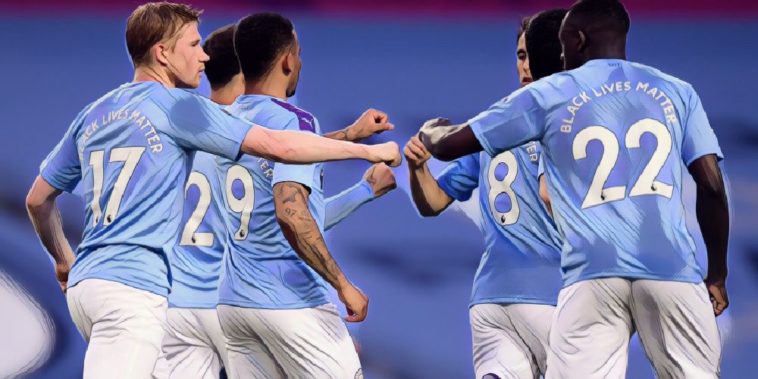 Manchester City got the Premier League show back on the road with a comfortable 3-0 win over Arsenal at an empty Etihad stadium.

Despite the opening exchanges being relatively even, Manchester City ran out deserving winners after a wholly dominant display – particularly in midfield – though the Citizens were given a helping hand by the ever-calamitous David Luiz.

The veteran defender, who is out-of-contract at the end of the month, was left on the bench by Mikel Arteta in favour for Pablo Mari, though the Brazilian was called upon in the 24th minute following an injury to the Spaniard.

Luiz was unable to deal with a raking Kevin de Bruyne ball in first-half stoppage time, the ball coming off the defender’s thigh into the path of Raheem Sterling, who smashed the ball past Arsenal ‘keeper Bernd Leno, who had already made a number of good saves to that point.

Just four minutes after the interval, and Luiz was on his way for an early shower, the 33-year-old bringing down Riyad Mahrez in the box to concede a penalty and be given his marching orders.

City wrapped up the scoring in second-half stoppage time, Phil Foden firing home after Sergio Aguero’s initial effort beat Leno but came back off the post, the Stockport born midfielder securing a second 3-0 win over the Gunners this season.

“It’s the first game, you never know what is going to happen, the fact that it is a long time without playing and the days to see, but apart from Eric [Garcia] we have no injuries, and we played good,” Guardiola told Sky Sports.

Garcia had to be withdrawn on a stretcher following a nasty-looking collision with goalkeeper Ederson, his substitution resulting in the final minutes being played 10v10.

“He’s conscious right now, which is a good sign, but we need to do an extra test, maybe in hospital,” Guardiola said of the young centre-back.

The game was one of the first games on English soil to be played behind closed doors following Aston Villa’s earlier draw with Sheffield United, and speaking on the experience, Guardiola added: “Well, in the beginning, it was a lot of energy, we knew it [would be] after three months off. It was not quiet.

“After 20 minutes, we had chances, and afterwards we scored two goals. It was important to score before half time and the second one, a penalty and a sending off, then the situation is completely different the that we play 10 v 11.

“In general, I cannot say anything else than being happy for the performance of the team and everyone, and I see the team in a good shape, and that is a good signal for the next games.”

Before the game, Guardiola admitted he was ‘worried’ about the hectic fixture list which will see nine league games, plus the FA Cup, all being played over the next six-and-a-half weeks:

“We had one eye on the next game, we select this one, then we have five days [until the Burnley game], then three days, three days, four days. So for Laporte, after a long injury, and there are players that I believe that are not for 90 minutes, but for 50, 60, 70 is good, and maybe next game, play another one. We will try to maintain every’s fitness.”

Meanwhile, the win means City will cling hold of their status as champions for a little while longer, with Liverpool now not able to clinch the title at the weekend when they face Everton in the Merseyside derby on Sunday evening.

Premier League refresh: Some of the best stats from the season so far ahead of the restart