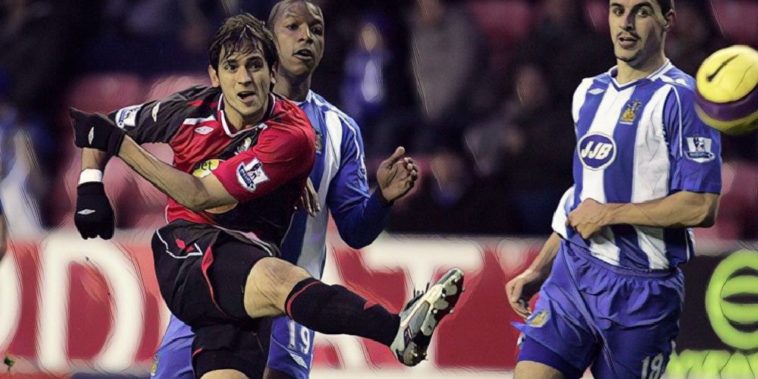 Scoring a hat-trick is usually one of the finest moments in a player’s career and round off an impressive 90 minute performance, yet for some, however, their special day may have been slightly tainted by the actual result.

While it hasn’t happened too often in the Premier League’s almost 30-year history, there have been a handful of times where a three-goal haul hasn’t led to all three points or even a draw.

Here’s a look at the five occasions that a hat-trick hero was on the losing side in the Premier League:

The one-club man hit four hat-trick’s during his impressive Premier League career, although, sadly for him, half of those came in defeats for his Southampton side. He could only do so much, in fairness.

The first treble came on the final day of the 1992/93 season against Oldham, the Latics heading into the game needing a win to avoid relegation, while they had to hope that Crystal Palace would suffer defeat away against Arsenal.

The home side went ahead after Neil Pointon scored directly from a corner, before Le Tissier grabbed an equaliser 10 minutes before half-time, the forward netting a typically composed volleyed effort into the bottom corner.

Perhaps the Saints were doing their opponents a favour in their survival bid as the home side surged into a 4-1 lead within 64 minutes, to all but ensure their safety. However, the visitors – and Le Tissier in particular – weren’t done yet, the England international bending in a free-kick on 67 minutes, before adding a third five minutes from time with a well-taken header, to get the nerves jangling around Boundary Park.

Fortunately for Joe Royle and Oldham, they hung on to secure their place in the top-flight on goal difference, with a perhaps slightly subdued Le Tissier left with just the match ball for his troubles.

The Guernsey-born midfielder didn’t have too much luck on that occasion on the final day and somewhat unbelievably would suffer the same fate just over two years later, this time on the opening day of the 1995/96 season.

The visitors – who’d finished third the previous campaign – raced into the lead after just eight minutes, Colin Cooper with a belting free-kick from range. Just two minutes later, however, the Saint’s main man Le Tissier was brought down in the penalty area and he duly stepped up to inevitably score from the penalty spot.

Goals from Ian Woan and Bryan Roy ensured that Forest went in 3-1 up at the break, with ‘Le God’ pulling a goal back with 20 minutes to go, again with a spot-kick – he would end his career having netted 47 of his 48 penalty attempts.

Another goal from Roy 10 minutes later looked to have killed the game before ‘Tiss’ gave the Dell hope of a remarkable comeback just moments later, the Saints creator-in-chief netting a nonchalantly taken free-kick to reduce Forest’s lead to just one.

Unfortunately, for the hosts, that goal which completed Le Tissier’s treble was ultimately in vain, as the thrilling encounter drew to close with the score at 4-3 to the visitors.

Now the face of the BBC’s ‘Homes under the Hammer’, there was a time when Dublin was hammering in top-flight goals, particularly during his time at Coventry City.

After a frustrating two-year spell at Manchester United, the striker arrived at Highfield Road with something of a point to prove, yet quickly established himself as one of the most prolific strikers in the Premier League.

It was during the 1995/96 season – his second campaign for the Sky Blues – that Dublin hit the first of his three top-flight hat-trick’s, that three-goal haul coming in an exhilarating affair with Sheffield Wednesday at Hillsborough.

The two sides went into the match off the back of a difficult start to the term, with Coventry having won just one league game all season. Despite that poor form, the visitors got off to the best possible opening, Dublin’s fine glancing header from a corner just about finding it’s way over the line.

The hosts then hit back soon after through Guy Whittingham, before Dublin added his second of the night, the former Cambridge United man reacting well to tap home with ease on the rebound. David Hurst then levelled things up just before half-time, with Dublin then completing his hat-trick not long after the interval, the one-time centre-back once again heading home from a corner.

Within just 15 minutes, however, the Owls had taken the lead for the first-time in the match through goals from Marc Degryse and former Palace striker Mark Bright, the latter man’s close range effort enough to wrap up all three points for David Pleat’s side.

The former Trinidad and Tobago international is of course better known for his crucial role in Manchester United’s 1998/1999 treble-winning season, yet it was his performances for Aston Villa that first made him a household name.

The 49-year-old hit four Premier League hat-tricks in his career, with just one of those coming during his time at Villa against Newcastle United in the 1996/97 season.

The explosive striker went into the game in the midst of a 12-game goal-scoring drought, a run that stretched back to April in the previous campaign, yet he took just four minutes at St James’ Park to put that run to bed, heading home superbly from a corner.

The hosts – who’d squandered a 12-point at the top of the table the previous campaign to eventual title winners Man United – hit back almost instantly through Les Ferdinand, before further goals from the former QPR striker and summer signing Alan Shearer gave Kevin Keegan’s side a 3-1 lead at half-time.

With Villa down to 10 men after Mark Draper’s red card for two bookable offences just before the interval, all looked lost for Brian Little’s men. However, inspired by their talismanic forward, the away side got back into the game, Yorke bursting through down the left and weaving his way through the Magpies defence, before firing brilliantly into the back of the net.

Steve Howey then extended Newcastle’s lead with a fine header soon after, although the visitors weren’t ready to lie down, Yorke slotting home to complete his hat-trick and give his side hope with 20 minutes still to play.

Sadly for Villa, they were left with nothing from the game, as Yorke was denied a fourth – and a late equaliser – by the linesman’s flag.

After that flurry of unfortunate hat-trick displays in the mid-90’s, we then a had 10-year wait for the next player to net a treble and still end up on the losing side, Roque Santa Cruz the unlucky man on this occasion.

The former Bayern Munich man arrived at Ewood Park in the summer of 2007 and went on to hit a mightily impressive 19 league goals for the club in his first full season in English football, a campaign that saw him bag an, albeit futile, hat-trick against Wigan Athletic.

The Latics went into the match at the JJB Stadium having not won in their previous 13 games, yet the hosts quickly raced into a 3-0 lead, courtesy of goals from Denny Landzaat, Marcus Bent and defender Paul Scharner, before Santa Cruz pulled a goal back on the stroke of half-time with a sensational volleyed effort from outside the box.

The Paraguayan international then tapped home at the start of the second period, before rounding off his hat-trick with a bullet header on 61 minutes, despite Rovers having seen Brett Emerton sent off for a second yellow just minutes earlier.

Down to 10 men, however, the visitors struggled to hold on, Bent heading home his second of the night just five minutes later, before he wrapped up the win – and his own treble – in the closing stages with a simple tap-in.

With both Bent and Santa Cruz both netting three times apiece, it became the first, and only, time that two opposing players have scored hat-trick’s in the same game in the Premier League.

There have been two other matches, both involving Southampton, in which two players have scored a hat-trick, although in those instances it was two players from the same team – Robert Pires and Jermaine Pennant in Arsenal’s 6-1 win over the Saints in 2003 and Jamie Vardy and Ayoze Perez in Leicester’s 9-0 hammering against Ralph Hasenhuttl’s side last season.

Wonder who gets to take home the match ball?

See also – Now or never? Is it time for Harry Kane to leave Tottenham?