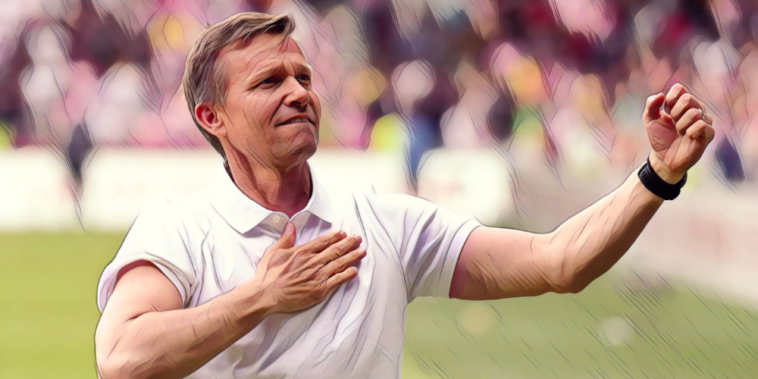 Following the Premier League’s final day action, we pick out some of the heroes and villains from the best and worst of the weekend fixtures.

Manchester City were crowned champions in thrilling fashion at the Etihad, coming from two goals down to beat Aston Villa and secure the Premier League title.

Liverpool end the season as runners-up after beating Wolves, whilst Tottenham earned their place in the Champions League after a convincing win at relegated Norwich.

The Canaries will be joined by Watford and Burnley in the Championship next season after the latter lost at home to Newcastle to drop into the bottom three, with Leeds escaping from the drop zone.

Off the bench to score two goals and turn defeat into a title-clinching victory, it doesn’t get much better than this for Ilkay Gundogan.

The Germany international’s impact on Manchester City’s title win has not been as influential as last season’s success, but he picked the perfect time to deliver a defining moment with a final day brace at the Etihad.

Manchester City turn it around at the Etihad!! WOW!! pic.twitter.com/4tRqwuvJUj

Pep Guardiola has been criticised for his substitutions – or lack of – at times this season, but his changes transformed the game as City came from two goals down to beat Aston villa and be crowned champions.

Gundogan’s marauding runs into the box to score twice will be the imagery attached to City’s championship win, but credit must also go to Raheem Sterling and Oleksandr Zinchenko for their own game-changing roles from the bench.

Following a disastrous display in Manchester United’s 4-0 hammering at Brighton, there was little improvement from the Sweden international as the Red Devils lost at Crystal Palace.

Lindelof was feeble in the challenge and unconvincing throughout, with the right-sided defensive axis of the centre-back and right-back Diogo Dalot exposed and exploited by the Eagles’ left flank.

The duo failed to cover themselves in glory as Wilfried Zaha scored the only goal of the game, failing to get close enough to the Ivorian before he fired home a low finish against his former side.

The watching Erik ten Hag will have been less than impressed.

Son Heung-Min wrote himself into the history books as the first-ever Asian winner of the Premier League’s Golden Boot, scoring twice on the final day to end the season to move level on 23 goals with Mohamed Salah.

It’s a remarkable haul for a footballer whose Golden Boot-winning season has come without a single penalty scored, whilst his two goals in the 5-0 win at Norwich were finishes of the highest quality.

“I used to dream of this when I was a kid and now it’s in my hands,” he told BBC Radio 5 Live.

“It’s actually a really heavy trophy and it’s incredible to have it. I can’t believe it – it makes me really emotional.”

Son’s goals have helped Spurs secure Champions League qualification, scoring 12 times across the final 10 fixtures of the season – a run that included nine wins – to fire the North Londoners to a top four finish.

Nathan Collins chose the worst time to have his poorest performance in a Burnley shirt, with the defender looking nervous through the club’s defeat to Newcastle.

The loss confirmed Burnley’s relegation to the Championship after Leeds won at Brentford and Collins’ contribution to the defeat was substantial.

The 21-year-old’s inexcusable handball provided Newcastle with a penalty to take the lead and the Clarets failed to recover, dropping out of the Premier League after six seasons.

Collins has been a highlight in an otherwise disappointing season for Burnley, but will need to bounce back after his hugely costly error.

Arsenal missed out on Champions League football after an end-of-season slump, but finished the season with an emphatic 5-1 win over Everton at the Emirates.

It’s been an encouraging campaign for Mikel Arteta’s team despite their failure to secure a top four finish, with improvement shown and the Gunners becoming a more likeable outfit among the fanbase.

Martin Odegaard will be at the centre of their future plans and orchestrated the win over Everton, pulling the strings in midfield and scoring a goal of real class with a passed finish into the far corner.

Only Mesut Ozil (84 – 2017/18) has created more chances among Arsenal players across the last five seasons.

Norwich’s miserable return to the Premier League concluded with a 5-0 home humbling, with the relegated Canaries well-beaten as Tottenham secured a top four finish at Carrow Road.

The home side’s cause was not helped by an awful error from goalkeeper Tim Krul, whose slack pass presented the ball straight to Rodrigo Bentancur for the second.

The Uruguayan duly whipped the ball in for Harry Kane to head home into an unguarded goal, in a moment with summarised the Canaries’ campaign.

Jesse Marsch has faced some unfair criticism since arriving at Leeds, with preconceptions over American coaches and the simple fact that he is not Marcelo Bielsa having seen him arrive with more than a point to prove.

There might just be some cutting Marsch some slack after Leeds secured their Premier League status, a win at Brentford seeing the side leapfrog Burnley and climb out of the bottom three.

After inheriting a side in free fall that had conceded 21 goals in just six matches, Marsch has guided Leeds to safety with four wins and three draws from their final 10 fixtures.

It hasn’t always been convincing and wasn’t at Brentford, but the Leeds fans could be beginning to warm to Marsch with his name sung loudly among the travelling supporters.

The Hammers took the lead through a thunderbastard from Michail Antonio, but were pegged back just five minutes into the second half as Joel Veltman found an equaliser for the Seagulls.

Lukasz Fabianski was at fault for the goal, allowing Veltman’s effort to squirm under his body and bring the sides level. It was a mistake the goalkeeper will rue and one which gave the initiative back to Brighton as the Seagulls came back to take all three points.

Read – Picking our Premier League Team of the Season