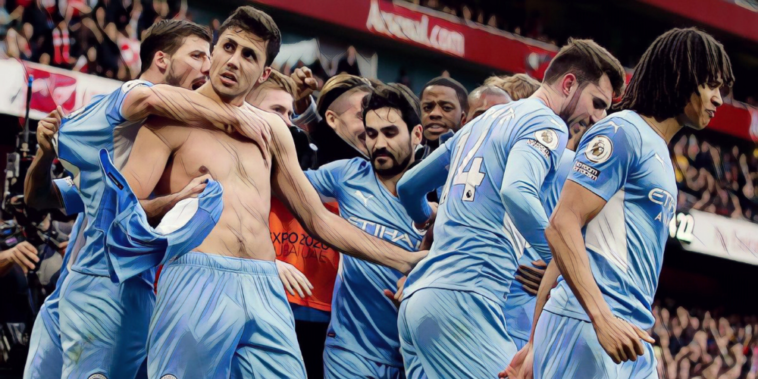 Pep Guardiola’s side trailed at half-time and had been very much below-par at the Emirates, as Arsenal’s youngsters posed problems with their energy and increasing confidence.

The game swung on three huge decisions from the officials, the first seeing Martin Odegaard denied a penalty with the Gunners leading after the Norwegian was brought down by Ederson inside the area.

Referee Stuart Attwell decided no penalty, despite Odegaard appearing to reach the ball first. Arsenal’s sense of injustice was then doubled as City were awarded a penalty of their own, with Attwell reversing his initial no spot-kick decision after consultation with the monitor.

Gabriel was then sent off for two inexplicable bookings inside the space of two minutes, providing the platform for Rodri to snatch a late winner in our Moment of the Week.

Man City win it LATE at The Emirates 😮

11 wins in a row! pic.twitter.com/H9gaKAYqgo

Title triumphs are often built on grinding out wins when not at your best and City showed spirit to push forward and claim three points deep into stoppage time.

Rodri’s winner had a sense of inevitability given the narrative of the clash, a moment which stretched City’s winning run to 11 consecutive games and leaves the defending champions in pole position to retain their crown.

Manuel Lanzini has enjoyed an impressive turnaround in fortunes in recent weeks, a forgotten figure having returned to prominence with a series of impressive performances for West Ham.

The midfielder struggled for regular first-team football over the opening months of the campaign, but has started five of the last six and took his total to four goals in eight games with an excellent double at Crystal Palace this weekend.

Manuel Lanzini doubles #WHUFC's lead with a sensational finish – it doesn't get much better than that! 🔥 pic.twitter.com/uiJSOCLlSp

Lanzini was cruelly robbed of a place in Argentina’s squad for the 2018 World Cup after sustaining a serious knee injury and it has been a mixed road back for the midfielder in recent campaigns.

This weekend’s showing at Selhurst Park provided a timely reminder of his qualities, however, including a wonderful first goal that saw him tee himself up before lashing beyond Vicente Guaita.

Lanzini’s goal followed a similarly spectacular effort in defeat at Manchester City earlier this season and the 28-year-old is a footballer capable of wonderful moments of magic.

His brace against Palace this weekend also continued an impressive run of form in London derbies, with Lanzini having now netted 13 goals – more than 50% of his total Premier League haul – in games against the Hammers’ capital rivals.

Chelsea and Liverpool produced one of the most enthralling halves of Premier League football in recent memory, the two teams sharing four goals in a breathless opening 45 minutes at Stamford Bridge.

The opening exchanges saw both sides make mistakes in a nervy beginning to the clash, before Sadio Mane and Mohamed Salah put Liverpool two goals ahead and in control.

Chelsea fought back impressively to level before the break, the catalyst for their comeback an outrageous goal from midfielder Mateo Kovacic.

The start of Chelsea's fightback…💪

Kovacic got their first goal of the match with an absolute stunner! 🚀 pic.twitter.com/EvhnFEnTHF

Kovacic’s name rarely appears on the scoresheet but when it does it is often in fantastic fashion, the Croatia international firing home a stunning volley at Stamford Bridge this weekend.

It’s now two league goals for the 29-year-old this season, more than in his previous three Premier League seasons combined.

There were a fair few candidates for this unwanted accolade this weekend, with the leading names including Leeds’ Tyler Roberts and Chelsea’s Christian Pulisic, the latter having wasted a clear early opportunity during his side’s draw with Liverpool.

Gabriel Martinelli earns our dishonourable award, however, after missing an open goal during Arsenal‘s defeat to Manchester City.

The Brazilian has been in superb form in recent weeks, but spurned a clear sight of goal after firing wide with the goal gaping.

Nathan Ake had raced back to clear from the goal-line after Aymeric Laporte’s mistake, though the loose ball fell invitingly to Martinelli with Ederson AWOL from his goal-line.

The 20-year-old fluffed his lines – admittedly a little unsighted by the questionable positioning of referee Stuart Attwell – and the chance to double Arsenal’s lead, with the Gunners crashing to an agonising late defeat at the Emirates.

Premier League goalkeepers were busy on a weekend that saw just one clean sheet across the division, an entertaining round of fixtures calling the league’s number ones into action.

Hugo Lloris deserves a mention for his acrobatic save from Josh King in Tottenham’s win at Watford, whilst both Edouard Mendy and Caoimhin Kelleher made good stops during Chelsea’s draw with Liverpool.

Our Save of the Week accolade is awarded to Vicente Guaita, however, who made this triple intervention during the Eagles’ defeat to West Ham.

There was little spectacular about the Spaniard’s shot-stopping, but it was a demonstration of Guaita’s agility and bravery to thrice thwart the Hammers in quick-fire fashion.

He produces a super double-save as #WHUFC turn up the heat…🔥 pic.twitter.com/hYfG5hSSDm

Thomas Tuchel was left unimpressed with refereeing decisions against his Chelsea side once again, with the German believing Sadio Mane should have been sent off inside the opening six seconds of the draw with Liverpool at Stamford Bridge.

Mane was cautioned after catching Cesar Azpilicueta with a wayward arm, an incident that Tuchel insisted should have resulted in red.

“I am not a friend of early red cards. I hate to say it because I love Mane and he is a nice guy and top player, but it is a red card.

There’s plenty of reason for positivity at Crystal Palace despite defeat to West Ham this weekend, the new-look Eagles having rarely given a bad account of themselves under new manager Patrick Vieira this season.

Vieira has injected youthful promise into the side and one player who could be set for increased minutes is Michael Olise, the summer signing from Reading having impressed once again off the bench.

63 – Michael Olise has been directly involved in a goal every 63 minutes on average in the Premier League this season (2 goals and 3 assists in 314 minutes), the best return of any player with at least 300 minutes played in the competition. Burgeoning. pic.twitter.com/4GB7TMaZ8b

The 20-year-old has now provided five goal involvements this season despite just two league starts, his 63 minutes per goal or assist the best average of any player to have played more than 300 minutes.

It’s hard to look past Gabriel Magalhaes for our Donkey of the Week award, the defender having enjoyed an impressive performance for Arsenal before his two bookings in the space of just two minutes.

The Brazilian’s first caution came for scuffing the penalty spot with his lack of sportsmanship punished by referee Stuart Attwell, before a clumsy – and somewhat needless – challenge on Gabriel Jesus saw him sent off just moments later.

"This is stupid, immature, petulant… What do you think you are achieving?"

"The worrying thing is it didn't surprise us, it will continue to happen."@rioferdy5 and @JoleonLescott have no sympathy for Gabriel for losing his head when emotions were running high. pic.twitter.com/9qgYi99eIf

His dismissal contributed to the unravelling of a strong Arsenal performance at the Emirates, as Manchester City came from behind to snatch a stoppage-time win and dent the Gunners’ top-four hopes.

The centre-back’s red card was also Arsenal’s 100th in the Premier League, becoming the first side to reach the figure.

Michael Keane deserves a mention following his horror show in Everton’s loss to Brighton, whilst this from Trezeguet could quite easily have seen the Aston Villa winger included in a more strongly-worded dishonourable accolade.

Truly embarrassing from the Egypt international.