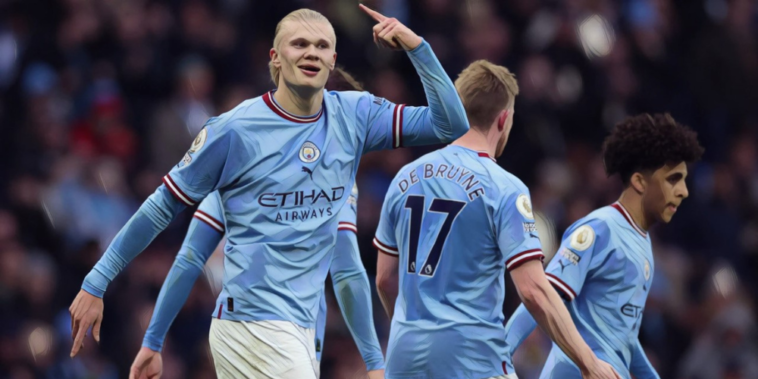 Just how big a moment in the season will Eddie Nketiah’s last-gasp goal prove to be?

Arsenal were under pressure after Manchester City’s win over Wolves the previous day, but edged a thriller against Manchester United thanks to some late drama at the Emirates.

Nketiah has deputised in impressive fashion for the injured Gabriel Jesus in recent weeks and provided his most crucial contribution yet with a double this weekend. His second came as the game ticked towards stoppage time, with the forward reacting to flick home Martin Odegaard’s effort and snatch a vital win for Arsenal.

NKETIAH IS THE MAN OF THE MOMENT! 🔥

Few anticipated Arsenal to be pushing for the title this season, but only six teams in English football history have ever won more points than Mikel Arteta’s side at this stage of a top-flight season.

City will not go away and the champions have the quality and experience to produce a winning run and close the gap, but the Gunners keep on passing tests and have navigated tricky fixtures with Tottenham and Manchester United in recent weeks.

JUST LOOK AT THAT REACTION FROM MIKEL ARTETA! What a game! 🔥🔥🔥 pic.twitter.com/soxNBCE9MD

If Arsenal do go on to be crowned champions for the first time since 2003/04 this season, Nketiah’s match-winner will be remembered as a crucial part of their triumphant campaign.

Erling Haaland is a freakish talent.

It’s becoming difficult not to become repetitive in our assessment of the Manchester City machine, the sort of talent for who superlatives become overused and feel not enough.

Haaland’s hat-trick against Wolves was his fourth of the season and took him to 25 goals in the Premier League, a record for a foreign footballer in their debut season in the division and more than each of the Golden Boot-winning totals from the past four seasons.

Just two other players – Alan Shearer and Harry Kane – have ever scored four hat-tricks in a single season and Haaland is closing in quickly on the most prolific Premier League campaign of all time.

There’s just no stopping the Norwegian, who does the simple things with ease and at an unrivalled rate. Few will remember his treble against Wolves as a classic, but three poacher’s finishes have continued an astonishing season for the 22-year-old.

Records are there to be broken and records will continue to be broken as long as City fashion chances for their superhuman striker. The statistics are stunning.

Marcus Rashford is unstoppable right now and while Manchester United’s unbeaten run came to an end at Arsenal, the forward continued his hot-streak around goal with a stunning strike.

Rashford embarrassed Thomas Partey with a sharp piece of skill, before driving forward and unleashing a thunderous strike which began outside the post before arcing in to beat Aaron Ramsdale.

A wonderful goal from a footballer at the very top of his game.

MARCUS RASHFORD! What a goal this is! 🤯 pic.twitter.com/5NqKfKZrxF

Crystal Palace have been on the wrong end of some stunning saves in recent fixtures. David de Gea denied the Eagles with a fantastic stop during the club’s draw with Manchester United in midweek, before Newcastle’s Nick Pope ensured this weekend’s clash ended goalless.

Pope had little to do with Newcastle the better side at Selhurst Park, but had to be alert to push Jean-Philippe Mateta’s powerful strike over the crossbar.

What a save that is from Nick Pope! 🧤 pic.twitter.com/BBzNE9mQpg

The England goalkeeper leads the race for the Premier League’s Golden Glove and added another clean sheet to his collection in South London, as Newcastle set a new club record of 15 top-flight games unbeaten.

Things are beginning to look bleak at Everton, with the expectation that Frank Lampard will be sacked following the club’s 2-0 defeat at West Ham.

It’s now eight games without a win for Everton, who have lost six of their last seven Premier League games. That five of those defeats have come against sides directly around them at the bottom of the table has only added to the frustration for a side who are 19th and in real danger of losing their top-flight status.

15 – Everton have collected just 15 points from their 20 games in the Premier League this season. Accounting for three points per win all-time, this is now their fewest points won after 20 games of any league season in their history. Unparalleled. pic.twitter.com/MLML0rhL2c

Everton have just 15 points from their opening 20 games, the lowest total at this stage of a season in the club’s history.

Everton’s defeat at West Ham contained the usual collection of sub-standard showings that have plagued their season.

It was a disastrous day for the Toffees who were plunged deeper into relegation trouble, with James Tarkowski part of a defence who struggled to cope at the London Stadium. The centre-back challenged for the same ball as teammate Conor Coady in the build-up to the opener, allowing Jarrod Bowen to sneak in unmarked and score the opener.

Tarkowski then played his part in the second as he dived in on Michail Antonio, who proceeded to skip round the centre-back’s clumsy challenge and centre for Bowen to net his second.

Frank Lampard – or his potential replacement – need more from Everton’s experienced group. The Merseysiders appear a sinking ship and are in real danger of relegation for the first time since the 1950s.