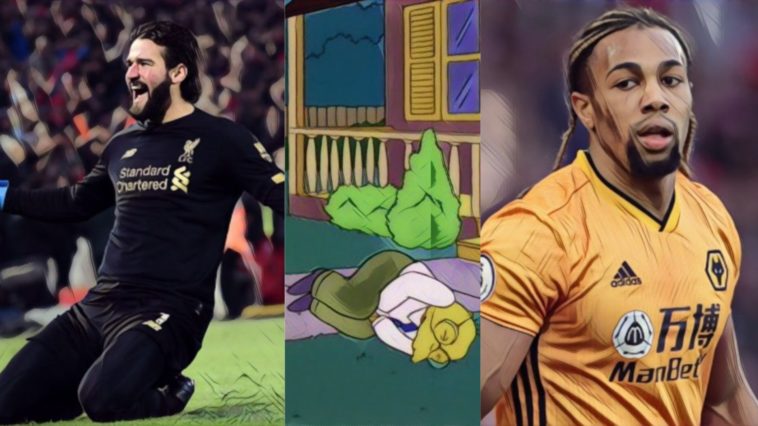 Isaac Hayden’s late winner against Chelsea was an amazing moment for Newcastle United and their fans, but that doesn’t take the honours this week. It was what happened as a result of that goal that gets the nod.

In the pandemonium of the celebratory aftermath, Matt Ritchie smashed the corner flag and the remnants flew into the crowd like shrapnel, connecting with one unfortunate man to give us Newcastle Fan Gets Hit In The Groin. It was reminiscent of Hans Moleman’s famous scene in The Simpsons.

nahh so fucking haydens just scored last minute and matt ritchies just blares the corner flag into the crowd and its only gone and hit this bald bloke in the cock 😭 in fucking tears man #nufc pic.twitter.com/3YyicO4YEn

Of course, the club saw this was gaining traction online and wanted a piece of those sweet, sweet retweets. It’s somehow funnier from this angle.

Apologies from Matt Ritchie… and the corner flag 😅😬#NUFC pic.twitter.com/Wz86Vpl1m4

Wolves‘ form took a bit of a nosedive since the New Year, but they managed to pull out a mightily impressive comeback against Southampton to win 3-2. The driving force behind that victory was Adama Traore, who has been one of the club’s most important players this season.

The Spanish winger was a tricky dribbler as per usual, completing eight take-ons and drawing four fouls, while completing 100% of his tackles and providing two assists. This man looks unstoppable when he gets going.

I think this about sums up how we all feel about Adama Traore pic.twitter.com/KrOZfzIdsZ

Harvey Barnes is only 22-years-old, but he knows his way to goal. The Leicester City winger picked up the ball in the middle of the park and made a beeline for the goal to score the game’s opener. It was his first of the campaign, the 13th of his senior career.

With the entire Manchester United team in the opposition half of the field in an effort to get an equaliser against Liverpool at Anfield, quick-thinking Alisson hit an accurate long ball into the path of Mo Salah, who secured all three points with the second goal of the match.

Nick Pope denied Jamie Vardy from the spot with a solid save to help Burnley overturn Leicester 2-1, one of seven saves he made during a top quality performance for the Clarets.

Leicester's main man cannot convert from the spot, after Harvey Barnes was fouled in the area by Ben Mee!

Man United’s best chance of the game fell to Anthony Martial, but the Frenchman blazed it over the bar. He still had both Alisson and Virgil van Dijk between him and the goal, so it wasn’t exactly a gimme, but he still should have hit the target.

Anthony Martial blazes over from close range after finding space in the Liverpool box!

Incredible reach from Steve Cook, whose 100% save percentage is the best in the Premier League. Shame it cost Bournemouth the game against Norwich City.

A once-off award to show some appreciation for Alisson having his Pepe Reina moment and sprinting down the length of the field so that he was the first to celebrate with Mo Salah. 10/10 for the knee slide, too.

A big thumbs down to Kaveh Solhekol, who reduced Boubakary Soumare, a player linked with both Manchester United and Chelsea, to a lazy comparison with Paul Pogba. Literally no one has described this player as “Pogba without the baggage”, but Kaveh took the all-too-easy route of merely comparing him with another black player, instead of doing actual research on how he actually plays. The standards of football broadcasting are slipping fast.

🗣 – "He's been described as 'Paul Pogba without the baggage'…"@SkyKaveh has all the latest as Lille's Boubakary Soumare is set to decide between Manchester United or Chelsea – plus some news from @skysports_sheth on Bruno Fernandes…👀#TransferTalk pic.twitter.com/Z1yV0AcdAm