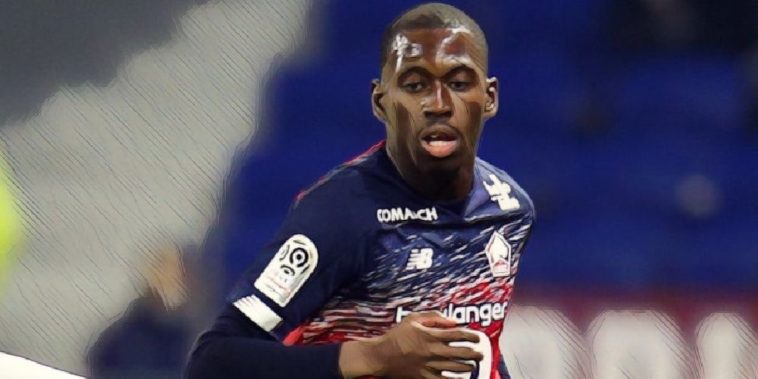 Manchester United and Chelsea target Boubakary Soumare has quashed speculation he could leave Lille this month, insisting a January transfer is ‘not on the cards’.

The midfielder has attracted Premier League interest following a series of impressive performances for the French side this season, with Manchester United and Chelsea amongst a host of clubs linked with a move to sign the highly-rated youngster this month.

Reports had claimed that Lille were prepared to sanction his sale should they receive a suitable offer, though Soumare has now dismissed the speculation, insisting he will remain with the club beyond the winter transfer window.

“I do not see myself leaving [in January],” Soumare said during an interview with French publication, L’Equipe. “I feel good here. I am learning, we have big objectives to attain, like qualification for the Champions’ League. A departure is not on the cards.”

Soumare joined Lille on a free transfer from Paris Saint-Germain in 2017 and has since gone on to establish himself as a first-team regular, the 20-year-old amongst a host of young talents at the club alongside Victor Osimhen and Gabriel being monitored by Europe’s elite.

Despite links to some of the continent’s biggest sides, the box-to-box midfielder admits he feels ‘good’, and insists he wanted to see the season out with Lille.

“I want to do a full season, yes,” he insisted. “I am not saying that I am in the starting XI, but the place that I have in the team today, I worked hard to get through the work that I put in, I won it. I cannot see myself leaving without seeing this through.

“I feel good, my team-mates help me. It is not the time to leave. I do not want to leave with any regrets.”

Asked whether he had informed Lille of his desire to stay, Soumare said he had informed the coach of his choice and is now likely to help the club’s pursuit of Champions League football before heading for pastures new.

“Yes, of course, I have already had discussions with the coach. I told him very clearly. I have a very precise idea of where I want to go in my career. I know today where I am. And I like being here.”