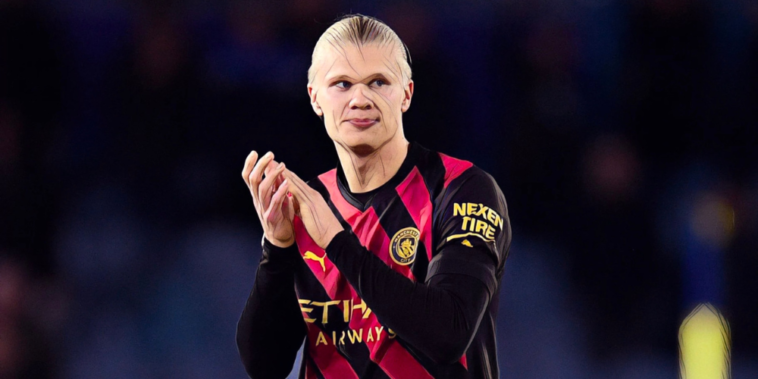 Erling Haaland’s extraordinary debut season at Manchester City continued with a brace in the club’s 3-1 win at Leeds this week.

Haaland picked up where he left off before the World Cup break with two goals at Elland Road, a double which moved the Norwegian to 20 goals in the Premier League this season.

It was another record-breaking moment for the 22-year-old, who has become the fastest footballer in history to reach 20 goals in the division.

Here are the fastest players to score 20 Premier League goals.

The Ghana international wasted no time in announcing his arrival into the Premier League, as he scored 12 goals in just 18 league appearances across the second half of the campaign.

A blistering start to the following season saw Yeboah score eight goals in just eight games to reach the 20-goal mark, including his iconic thunderbastards against Liverpool and Wimbledon.

He became the first man to win successive Match of the Day Goal of the Month competitions, with his thunderous shooting ability feared across the division.

Jose Mourinho’s search for goals saw Diego Costa arrive at Chelsea ahead of the 2014/15 campaign, with the snarling centre-forward proving the perfect man to lead the line at Stamford Bridge.

Costa’s brilliant debut season helped lead Chelsea to the Premier League title, as he scored 20 league goals in 26 appearances for the west Londoners.

He began the campaign with seven in four games – including a hat-trick against Swansea – and he failed to stop scoring across the remainder of the season.

It was the start of a prolific period for the forward in the Premier League, as Costa won two league titles and racked up 52 goals in just 89 appearances for Chelsea.

The patient approach of Sir Alex Ferguson was rewarded however, as Van Nistelrooy starred during a stunning first season in English football. He scored 23 league goals, a record at the time for a foreign player in their debut season in the division, and was named as the PFA Player of the Year.

He reached 20 goals in just 26 league appearances, in the first of five goal-laden seasons at Old Trafford. Van Nistelrooy scored 150 goals in just 219 games for the Red Devils and reached 20+ league goals in four of his five Premier League campaigns.

His finest campaign came in 2002/03 as he struck 44 goals in all competitions, a figure which remains a joint-Premier League record for a single season.

Andy Cole took the Premier League by storm during his first season in the division, having scored the goals that fired Newcastle to promotion.

Cole’s goals then led the Magpies to a third-place finish on their top-flight return, with the forward named as the PFA Young Player of the Year after topping the division for both goals and assists.

He scored 20 goals in his first 23 appearances and ended the campaign with 34 league goals, a haul which won Cole the Premier League’s Golden Boot and remains a joint-record for a single campaign.

Just three players have ever scored more than Cole’s 187 Premier League goals, remarkably of which just one came from the penalty spot.

Phillips had scored prolifically to fire Sunderland to promotion, but ended his first top-flight season with doubts over his ability to step up. He answered those doubts in emphatic style, as he scored 20 goals in his first 21 appearances to fire the Black Cats to a seventh-place finish.

Phillips reached the 20-goal mark in mid-January and ended the campaign with 30 goals in the Premier League.

He became the first player to score 30 goals in a season since the Premier League changed to a 38-game campaign, with his haul earning Phillips both the Golden Boot and European Golden Shoe. He remains the only Englishman to have won the latter award.

Erling Haaland has obliterated yet another Premier League landmark, after reaching 20 goals in just 14 appearances in English football.

It’s been a phenomenal first season for Haaland at Manchester City, as the Norwegian has broken record after record in a prolific campaign. His list of records include becoming the first player to score hat-tricks in three consecutive home games, while he is the fastest footballer to reach three trebles in the Premier League – taking just eight games.

No record appears out of reach for the 22-year-old, who is fast closing in on the Premier League’s single season goal record. He needs just 13 more goals to break Mohamed Salah’s milestone for a 38-game season set in 2017/18.