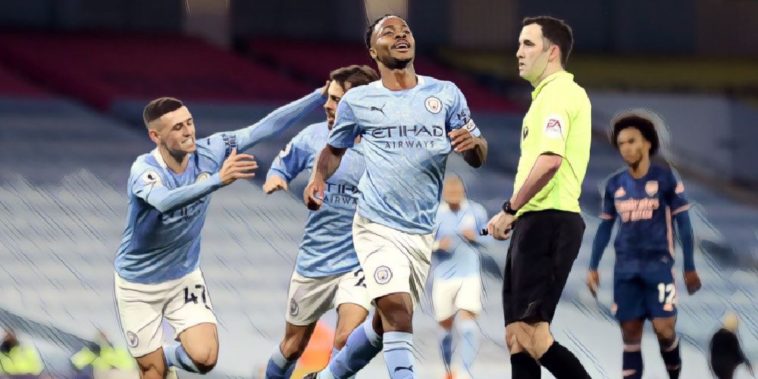 Raheem Sterling joined an exclusive group of Premier League players this weekend after scoring in Manchester City’s 2-1 defeat to Chelsea, the winger reaching 10+ league goals for the fourth consecutive campaign.

It’s been a testing season for the England international at the Etihad this term, though his latest goal continued a fine recent record with only eight players having managed to score 10+ goals in each of the last four seasons.

Following Sterling’s landmark goal we’ve looked at the players to have achieved the feat.

Pierre-Emerick Aubameyang has endured a similarly difficult season to Sterling this season, the Arsenal forward having failed to replicate the performances that saw him hailed as one of the best forwards in the Premier League.

Aubameyang has scored prolifically since signing for Arsenal from Borussia Dortmund in 2018, making an instant impact after netting 10 goals in just 13 league appearances after arriving in the January transfer window.

The Gabon international won a share of the Golden Boot after scoring 22 goals during his first full season, a haul he matched the following campaign to narrowly miss out on a second successive accolade.

Despite a dip in performances this term, the 31-year-old has reached 10 for the season so far and boasts an impressive overall record of 64 goals in just 111 appearances in the Premier League.

Harry Kane remains arguably the best centre-forward in the Premier League and amongst the very finest in world football, the England captain having scored at a staggering rate for Spurs in recent seasons.

Kane burst onto the scene during the 2014/15 campaign and netted 20+ league goals in each of his first four seasons as a regular with the north London side.

Those figures dropped to 17 and 18 respectively over two injury-hit campaigns over the last two seasons, before returning to his best this term with 21 goals to date.

Kane is the current leader in his pursuit of a third career Golden Boot and has never netted less than 15 goals in a league season since becoming a first-team fixture, the 27-year-old recently passing Robbie Fowler to move up to seventh amongst the Premier League’s all-time leading scorers.

The second Arsenal player to feature on this list, Alexandre Lacazette has been a reliable – if not prolific – scorer of goals since moving to the Premier League from Lyon.

Lacazette scored 76 goals across his final three seasons with the French side before making the move to the Emirates, where has since netted 50 goals in 126 appearances across four seasons.

The 29-year-old is the club’s leading scorer this season with 13 league goals and 17 overall, though his future remans uncertain with the forward set to enter the final year of his contract this summer.

Mohamed Salah leads the Premier League for goals since his return to the division with Liverpool, setting a new divisional record of 32 in a season during his first campaign on Merseyside in 2017/18.

The Egyptian international won a second successive Golden Boot the following season and has continued to score at a rapid rate, his current record standing at 93 goals in just 141 league appearances for the Reds.

That record has been boosted by a haul of 20 so far this season – the fourth consecutive campaign he has scored 19+ – with the forward one behind Golden Boot leader Harry Kane as he chases a third accolade in just four seasons.

Son Heung-Min has developed into one of Europe’s best inside forwards during six seasons at Tottenham, bouncing back from a difficult debut season to flourish into one of the division’s finest.

Son has scored 10+ league goals in each of the past five campaigns for Spurs, with the South Korea international enjoying the best season of his career to date with 17 goals in 34 league appearances this term – a figure bettered by only Tottenham teammate Kane and Mohamed Salah.

The 28-year-old is an irreplaceable figure for the north Londoners and is set to play an integral role as the club prepare for a new era under new management next season.

Sterling’s goal against Chelsea saw the winger reach 10+ league goals for the fourth season in a row, with the Manchester City star having evolved into a productive, goalscoring wide player at the Etihad.

The England international broke through at Liverpool before a big-money move to Manchester six seasons ago, his development accelerating following the arrival of Pep Guardiola as manager with Sterling becoming one of the most effective players in the Premier League.

Last season the 26-year-old scored a career-best 31 goals in all competitions, including netting 20 in the Premier League for the first time.

His performances have dropped this season with Sterling in and out of the side in recent weeks, though 10+ league goals from wide is a strong return for any player.

There have been few more reliable sources of goals than Jamie Vardy in recent seasons, the Leicester forward having enjoyed the best period of his career over the past four years.

Vardy has netted 74 league goals across that period, reaching 10+ in each campaign and twice scoring 20 league goals in a Premier League season.

The latter of those came last season as the Foxes’ forward won a maiden Golden Boot accolade, a campaign which also saw the 34-year-old reach a century of career goals at Premier League level.

Sitting amongst some of the Premier League’s leading names is Chris Wood, the Burnley forward having scored 10+ goals in each of the last four seasons.

Wood signed for Burnley in a £15m deal from Leeds in 2017 and has proven a regular source of goals for Sean Dyche’s side, his record of reaching double figures in each campaign all the more impressive in a Clarets side not renowned for scoring goals.

The 29-year-old is currently on 11 for the season after netting a hat-trick against Wolves earlier this month, becoming the first New Zealander to net a top-flight treble in English football.