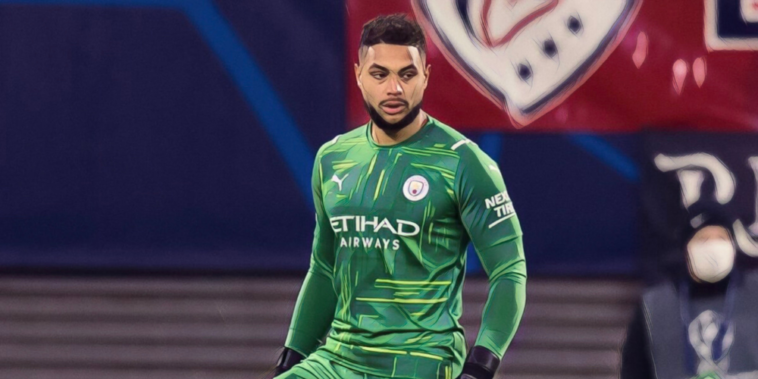 Zack Steffen appears set to leave Manchester City this summer in search of regular first-team football, with the goalkeeper keen to stake his claim to be the United State’s number one at the 2022 World Cup in Qatar.

Steffen has had a supporting role across his two seasons at the Etihad, the formidable presence and unique talents of Ederson having restricted the 27-year-old to a watching brief for much of his time in the Premier League.

Keen to establish himself as a first-choice, an exit appears imminent for Steffen following the announcement that City have agreed a deal to add free agent Stefan Ortega to their goalkeeping ranks.

Steffen first arrived in European football during a short spell with SC Freiburg, featuring for the Bundesliga side’s reserve team before earning his real breakthrough upon a return to the United States.

He signed for Columbus Crew before a period on loan at Pittsburgh Riverhounds to aid his development, returning to the MLS outfit to break into their first-team plans.

There was soon a rise in Sports Betting in Ohio for the Colombus Crew trained goalkeeper as Steffen was named as MLS Goalkeeper of the Year in 2018 and was included in the league’s Best XI, performances which catapulted him into international contention. Having made his international debut against Bosnia and Herzegovina in January 2018, he featured prominently over the remainder of the year to emerge as the number one for the Stars and Stripes.

Interest from England soon arrived and in 2019 he completed a move to Manchester City, with the deal – potentially worth up to £10m – making Steffen the most expensive goalkeeper in MLS history.

Until recently, the number of American players who have had a significant impact on major European teams has been limited, but throughout the past two decades there have been no shortage of goalkeepers to make their mark in the Premier League.

Brad Friedel, Kasey Keller and Tim Howard are among the names to have left a lasting impression, with the latter having been a particular role model for an impressionable Steffen growing up.

“He was just a stud in goal over here and with the national team,” Steffen told SPORTbible when discussing the former Manchester United and Everton goalkeeper.

“His presence in goal, his leadership, and his intensity – he was like a lion. It was really fun to watch. As a little black kid growing up in America, watching an American play over here (Premier League), it was really inspiring.”

Born in Coatesville, Pennsylvania, Steffen tried his hand at several sports before settling on football. US staples in basketball and American football were both enjoyed as a youngster, a background which aided his development as a goalkeeper with handling and cross-code skills developed.

Upon arriving at the Etihad, Steffen was loaned to Fortuna Dusseldorf for the 2019/20 campaign. An impressive run of performances saw him make the second highest number of saves in the Bundesliga, before injury and the Covid-19 pandemic curtailed his campaign.

Since returning to Manchester his action has been limited, restricted predominantly to cup competition. He has made 21 appearances in all competitions, with Ederson proving a sizeable obstacle to his hopes of a regular run in the side.

Whilst his minutes have been restricted, the opportunity to work closely alongside Ederson will have had a major impact on Steffen’s development as a modern goalkeeper.

Whilst impossible to replicate, the Brazilian is viewed as the benchmark for all-round contribution from shot-stoppers, so much so that his role in the club’s build-up play and operation of a high defensive line often outweigh even the goalkeeping fundamentals.

Steffen arrived at the Etihad with a core base of solid attributes. Possessing a large frame, athleticism, reflexes and reach, he had a foundation on which to improve in the Premier League.

Though mistakes have been made – most notably a howler in last season’s FA Cup semi-final defeat to Liverpool – Steffen has emerged as the most adept USMNT goalkeeper with the ball at his feet.

His pass accuracy of 81.82% was less than Ederson (88.75%) and Alisson (85.47%) – regarded as arguably the two best ball-playing goalkeepers in the Premier League – but significantly higher than De Gea (68.91%) and outlines his schooling in a team whose focus is to play from deep.

His distribution is the key area which keeps him arguably ahead of Matt Turner in the race to be the United States’ number one in Qatar, with the latter’s shot-stopping having excelled.

Turner – a recent addition at Arsenal after winning MLS Goalkeeper of the Year in 2021 – shone during the USA’s CONCACAF Gold Cup win last year in Steffen’s absence and it is his emergence which has persuaded the City goalkeeper to depart in search of regular minutes at club level.

Since his debut in 2021, Turner has now earned 18 caps. Steffen, across the same period, has 10 and is hoping a fresh challenge can reclaim his place in the side before the World Cup arrives in November.

A loan move looks probable, with MLS clubs and Burnley among those already linked. The latter recently allowed Nick Pope to leave for Newcastle and have a City connection with Vincent Kompany having taken charge as manager this season.