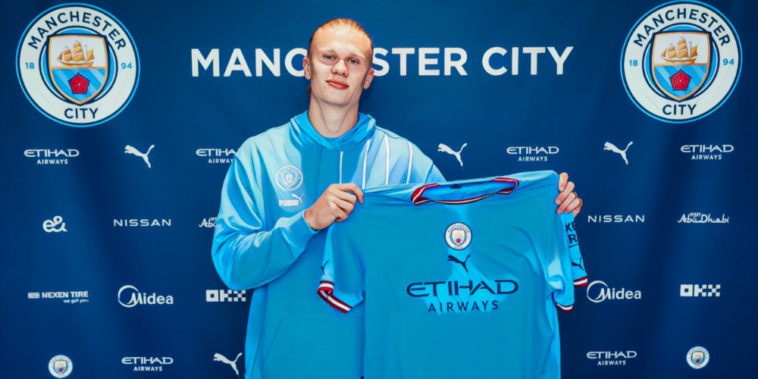 European clubs have wasted little time in securing new additions for next season with a host of major moves having already happened this summer.

Before July has even began we’ve seen several star names paraded in new club colours and we’ve decided to compile a best XI of those who have already secured transfers across Europe’s top five leagues.

Newcastle capitalised on Burnley’s relegation from the Premier League to sign Nick Pope, securing a £10m deal for the England international.

Pope had been keen to remain in the top division and keep alive his World Cup ambitions, completing a move to St James’ Park to become the Magpies’ second major signing of the summer.

The 30-year-old has proven himself as an excellent shot-stopper across six seasons at Burnley and ranked fifth in the Premier League for save percentage last season, despite being among the division’s busiest goalkeepers.

Bayern Munich have been shrewd operators in the summer window so far, spending around just £45m to sign Noussair Mazraoui, Ryan Gravenberch and Sadio Mane.

Mazraoui arrives on a free transfer from Ajax after deciding on a new challenge, having emerged as one of the best full-backs outside Europe’s top five leagues in Amsterdam.

The Moroccan scored five goals and provided two assists as Ajax won the Eredivise last season and will hope to nail down the right-back role in Munich.

Crucially, his arrival could allow Benjamin Pavard to return to his more natural position in central defence.

Antonio Rudiger will prove a difficult presence to replace at Chelsea, with the defender having decided to leave the west Londoners for Real Madrid.

Rudiger departs as a free agent after failing to agree a new deal at Stamford Bridge and has signed a contract with the reigning European champions.

Named in the Premier League’s Team of the Season in 2021/22, he will represent a fine addition to the Real ranks and will compete with Eder Militao and David Alaba for a role at centre-back.

The 29-year-old has taken his game to new levels in recent campaigns and arrives in Spanish football regarded as one of Europe’s leading centre-backs.

Niklas Sule’s desire for a prominent role has led to one of the most surprising switches of the summer, with the centre-back signing for Borussia Dortmund on a free transfer.

Sule has won five consecutive Bundesliga titles at Bayern Munich, but will start next season with the ambition of ending his former side’s dominance of the division.

Sule has started just 25 league games across the past two seasons, but at 26 and an established international with 40 caps for Germany, he represents astute business in a summer of exciting arrivals at Dortmund.

Paris St-Germain have activated an option to buy Nuno Mendes for a reported £34m this summer, securing the loanee on a permanent deal from Sporting Lisbon.

The 20-year-old made a positive impression during a loan spell at PSG last season, making 37 appearances in all competitions.

Mendes – who has already won 15 caps for Portugal – helped PSG to Ligue 1 success last season and was included in the divisional Team of the Season alongside teammates Gianluigi Donnarumma, Marquinhos and Kylian Mbappe.

Real Madrid splashed the cash to sign Aurélien Tchouameni this summer, beating off competition from Liverpool and PSG to sign the midfielder in a deal worth up to €100m.

Aurélien Tchouameni has excelled across two seasons at Monaco, winning the Ligue 1 Young Player of the Season award in 2020/21 and earning consecutive inclusions in the division’s Team of the Season.

😍 How much are you looking forward to seeing these guys in action?
✌ @atchouameni | @ToniRuediger pic.twitter.com/StqMVqguvP

The 22-year-old led the league for interceptions last season and ranked third for tackles, with the France international a long-term replacement for Casemiro at the Bernabeu.

Antonio Conte has wasted no time in getting his business done this summer, securing a raft of new faces ahead of Tottenham’s return to the Champions League.

Yves Bissouma has arrived from Brighton to boost the club’s midfield options, with the Mali international having been courted by several leading teams before making the move to north London.

An excellent ball-winner, Bissouma and January signing Rodrigo Bentancur could provide a fine midfield axis for Conte to build his side around.

Federico Chiesa is another name who turned a loan move into a permanent transfer this summer, with Juventus activating the €40 million (£34m) purchase option for the Fiorentina winger.

Chiesa has evolved into one of Serie A’s most dangerous talents across two seasons on loan at Juve, despite an injury-plagued 2021/22 in which the 24-year-old suffered a cruciate ligament injury.

Outstanding as Italy won Euro 2020 last summer, he will hope to return as soon as possible to play a prominent part in Juventus’ rebuild.

Sadio Mane has been one of the major movers of the summer, swapping Liverpool for Bayern Munich after six successful seasons at Anfield.

The first major signing of the Jurgen Klopp era, he won a clean sweep of major honours and scored 120 goals in all competitions for the Reds.

Bayern have capitalised on Mane’s contract situation and desire for a new challenge, securing a deal worth just £35m for one of European football’s best wide forwards.

🗣️ Sadio Mané: "I've worked very hard in my life to play for the biggest clubs in the world. When you play for Bayern, you know what you can expect." #ServusMané pic.twitter.com/ENQ0tIB6mU

Mane – who was named in the PFA Team of the Season for a fourth time in 2021/22 – will have his eyes on more medals following his arrival in Germany.

Liverpool wrapped up a deal for Darwin Nunez before sanctioning the sale of Mane, bringing in a forward who turned the heads of Europe’s elite last season.

Nunez scored 34 goals in all competitions for Benfica last season, including netting in both legs of a Champions League quarter-final clash with Liverpool.

The deal for the 23-year-old could reach a club record sum of £85m with add-ons, whilst the presence of a more traditional number nine could signal change at Liverpool next season.

Haaland’s incredible performances had led to each of Europe’s elite expressing an interest, though he will begin next season with the Premier League champions in an ominous statement of intent from Pep Guardiola’s side.

Ready to light up the North! 🏠🌌#ManCity pic.twitter.com/XubuDqEUMC

The Norwegian scored a staggering 86 goals in 89 appearances across two-and-a-half seasons at Dortmund. Given the calibre of creative service at the Etihad, it could spell bad news for Premier League defences.