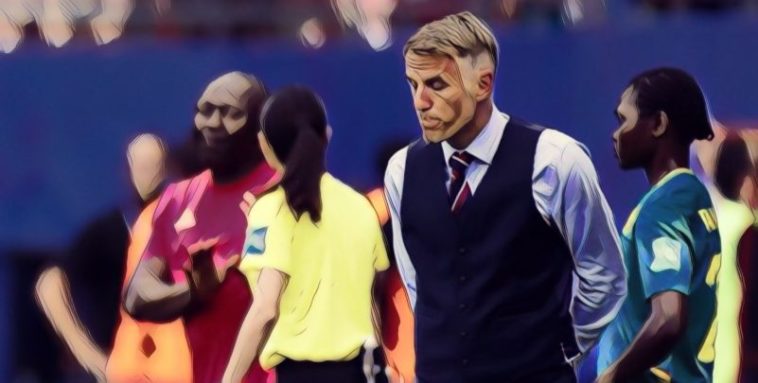 England manager Phil Neville’s criticism of Cameroon players came across as hypocritical and unnecessary, while VAR is resulting in more problems than solutions.

Picture the scene: it’s a mild summer’s day in suburban England, when a football match breaks out into an all-out brawl. Young girls are spitting on their opponents, toes are relentlessly trodden underfoot, and eye sockets are being elbowed into oblivion. There is no escape from the violence, this is the women’s game at youth level now, where only the meanest and most homicidal of players survive with the limbs intact.

That’s how much England’s 3-0 win over Cameroon in the last 16 of the Fifa Women’s World Cup will impact the world if the reaction is anything to go by. Let’s take a step back, shall we?

During the course of the game, the Cameroonians felt mightily aggrieved about a number of decisions that went against them, primarily two that came from VAR reviews. Ellen White doubled England’s lead just before half-time, although she looked like she might have been a squeak offside. The replays showed she was just onside, but the Cameroon players were incensed by the decision and refused to restart the game.

The African side seemingly got themselves back into the tie immediately after the interval, but it was ruled offside by the smallest of margins. Like, miniscule.

Cameroon players crying on the pitch and going crazy at the officials here. pic.twitter.com/Yaqz7fX52W

More protests followed, as the outrage and emotion of the aggrieved players became more pronounced. When they game eventually got going again, Cameroon played physically and, at times, over the line. An elbow was thrown. Phlegm flew through the air and onto an arm, and the referee even got a little push, although it’s not obvious that either action was intentional. In injury time a late tackle by Alexandra Takounda Engolo only received a yellow card, although it probably should have been a red.

Given the 90 or so minutes that preceded that incident, however, one can see why the referee did not send her off. It would have rubbed salt into very fresh wounds. Not that England manager Phil Neville minded doing so.

“It didn’t feel like football, to be honest with you,” the former Manchester United player told the BBC in his post-match interview. “We get briefings about coming on TV and saying it was a good win, and it was a good win, we played okay and we were ruthless in attack — but that wasn’t football.

“It wasn’t a World Cup last-16, in terms of the behaviour I want to see from footballers. This is going out worldwide. I can’t stand here and say I particularly enjoyed it, my players didn’t enjoy it, at half-time they were confused about the actions, what they should do.

“They kept their concentration fantastically, but with images going out worldwide about how to act, there’s young girls out there seeing that behaviour. That’s not right. We’re into the quarter-finals but there’s a bigger picture here. There’s a certain standard of behaviour you have to have. My players had that and I’m proud.”

Now, there’s no doubt that Cameroon stepped over the line during that match, but this felt like an unnecessary lecture from Neville on the ‘unwritten rules’ of the game. This coming from a man who revelled in kicking Jose Antonio Reyes “off the park” in an encounter with Arsenal at Old Trafford. An ex-pro who said he would gladly “two-foot” a player for attempting a no-look pass in training. “We’d smash them,” he said on Match of the Day in 2015.

Yet the Cameroon players’ actions are to be held accountable for their effect on young women across the world. If you say so, Phil.

What one should consider here, is that Neville has been extremely privileged as a player and manager. He had the best facilities and coaches that you could want as a footballer, and he was handsomely paid while getting to live out his dream. His knowledge or experience of what the Cameroonian players have had to do just to get to this point, is almost certainly nil.

For them, this is the biggest moment on the biggest stage of their careers. They have to fight tooth and nail just to secure a living wage while playing the game. A win in this tie would have been transformative for most, if not all of those players. So when decision after decision, marginal call after call, goes against you, then it’s perhaps understandable to feel like someone is against you, whether that’s the officials or even Fifa.

Madness just before the half time whistle as Cameroon decide to go on strike after conceding a second goal pic.twitter.com/AiCoJL0G1R

That’s not to excuse the behaviour or actions of the team, as they could have dealt with it a lot better than they did and were certainly lucky not to be at least a woman down. But one can empathise with their situation if nothing else.

The framing of their actions is certainly odd though. It has gone beyond the mere realms of a sporting contest and veered into full-on Helen Lovejoy screaming “won’t somebody please think of the children?!” After all, this wasn’t the reaction to Luis Suarez biting a chunk out of Giorgio Chiellini at the 2014 World Cup. No one fretted about what effect Eric Cantona’s kung-fu kick would have on the children of England. So why is being brought up by Neville and hordes of frothing England fans online?

The other thing that this match has highlighted is the lack of top quality officiating in women’s football. It’s something the relevant authorities have never put much emphasis on and players have generally been allowed to have at it up to now. Some games are free-for-alls, with lunging tackles and body-checking all over the shop. That’s obviously not the case for every match in the women’s game, but the implementation of VAR in this tournament has revealed just how poor the officiating can be.

As for the offside calls in this particular match, a question is raised: the officials in the video booth freeze frame the play to determine where the attacker and the last defender is when the ball is hit forward, but what is the correct frame they hone in on? With the ability to fixate on any given frame down to the 100th of a second, and the margins for offside being literal centimetres in some cases, when do they know the exact right moment a ball has been struck?

A system that was intended to fix football’s ailments has led to on-field protests, violent actions, long delays and columnists like me thinking way too much about video replays. A work in progress, you might say.