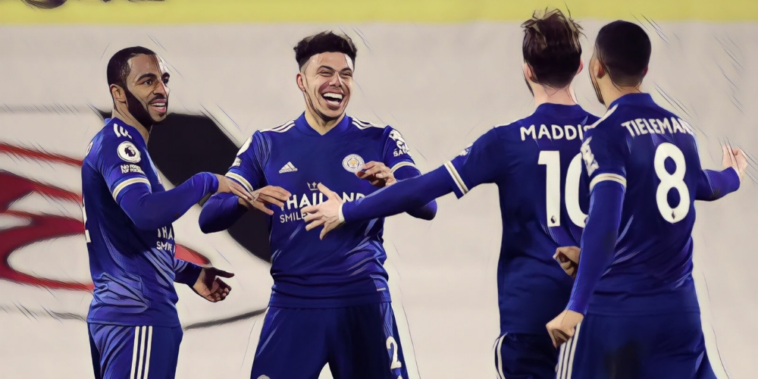 Ricardo Pereira has joined a long list of injuries for Leicester as the club prepare to begin their Europa League knockout stage campaign against Slavia Prague.

Leicester travel to face Slavia in the first leg of their round of 32 clash tomorrow evening, having been drawn against the Czech champions after qualifying for the knockout stages as group winners.

Brendan Rodgers’ side will be hoping to secure a positive first leg result but will head into the clash with their full-back options stretched, full-back Pereira joining the likes of James Justin and Timothy Castagne on the sidelines after suffering ‘tightness’ following the win over Liverpool last weekend.

Rodgers has confirmed that the Portugal international will not feaure, with Daniel Amartey expected to continue at right-back and Christian Fuchs and Luke Thomas competing for a position on the left.

“Ricardo, having been out for such a long time and working back in, you have to be really careful with the loading he has,” Rodgers told his pre-match press conference. “He felt a bit of tightness after the game the other day.

“It’s remembering he is coming back from a long injury and as much as we would love him to play every single minute, we have to be conscious of the games and his physical condition.

“He will miss out on this one, but should be fresh and fine for the game at the weekend.

“We don’t want to take him if we’re not going to use him. It’s a chance for him to stay here, do some recovery work and be ready for the weekend.”

Leicester will also be without Ayoze Perez, Wesley Fofana and Dennis Praet for the clash, as they look to continue their impressive form in Europe this season having lost just one of their six group stage fixtures.

Slavia will head into the clash in confident mood with the Czech champions unbeaten domestically this season, opening up a 10-point advantage over city rivals Sparta after winning 16 and drawing three of their 19 league fixtures.