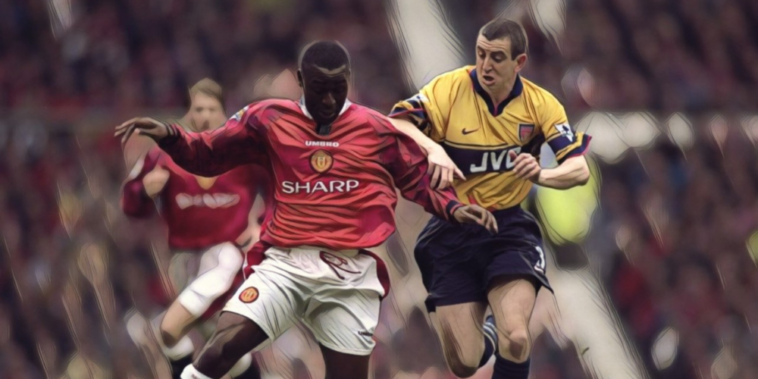 Andy Cole has discussed Manchester United’s intense rivalry with Arsenal ahead of this weekend’s Premier League meeting between the sides.

Arsenal host Manchester United in a huge fixture on Sunday, with the Gunners top of the table after a brilliant start to the season under Mikel Arteta. United will arrive in north London in fine form of their own, having won nine of their last ten games in all competitions.

The importance of the clash has brought back memories of the fierce rivalry between the sides across the turn of the millennium, as the two teams shared the Premier League title for eight straight seasons.

Cole won five league titles during a decorated career at Old Trafford and has recalled his memories of the rivalry between the sides.

”It was one of the best in Premier League history,” Cole told Betway. ”We always knew in pre-season that Arsenal were the team to beat if we were going to win the league.

”It was two teams who played brilliant football and had a lot of quality players. You knew what you were going to get from the games. It was maybe a rivalry that you don’t see so much of these days. There was such an intensity, almost a dislike, between the sets of players during the match.

Thierry Henry looks back on the Manchester United match that stopped the Arsenal Invincibles. pic.twitter.com/l3Bgx7v3Dx

”We knew we had to win or at the least take a point every time. We looked around the dressing room before the games and said that we have to go to war together.”

Cole also opened up on the progress of his former side this season with the Red Devils having shown improvement under Erik ten Hag. United are eight points behind Arsenal ahead of this weekend’s clash and Cole discussed whether the club can be considered title challengers.

”Sir Alex Ferguson always said to us that the title race doesn’t get decided in January, it gets decided in April.

”It’s too hard to give a prediction for the title with so many games to go because there are so many peaks and troughs to come.

”Over 38 games you will always hit a rough patch, but Arsenal and Man Utd haven’t had one yet and we don’t know how they’ll deal with it when they do because they’re not used to being in this position.

”Arsenal are doing extremely well, they’re playing some very good football, but when that rough patch happens it will be a test. Not many of that dressing room have been in that position. If they lose a couple of games, it’s suddenly right back on again. Players like Oleksandr Zinchenko, who I really like, will be so crucial in those moments because he’s at least had those experiences.

”City seem to be having their rough patch now, but with them you know it won’t be long until they’re back at it. They have so much experience in that dressing room now. They’ll soon be creating chances and scoring goals again.”