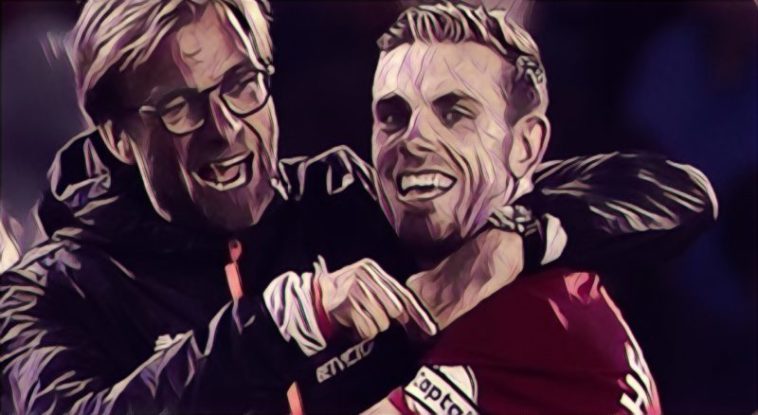 Regardless of what position Liverpool finish in the league this season, Jurgen Klopp has a big decision to make this summer regarding his club captain.

When you try and think of players that divide opinion amongst their own fans, chances are Jordan Henderson would be high on that list. Practically every one of his performances, regardless of how he actually plays draws either praise or criticism from Liverpool fans.

There is never usually a general consensus on how he plays across the board. This season the murmurs to have him dropped from Klopp’s starting eleven have grown louder and louder from sections of Liverpool fan’s. He is your definition of a Marmite footballer.

Henderson arrived at Anfield in the summer of 2011 in a £20 million deal from boyhood club Sunderland. A promising young English midfielder who had just earned his first cap for his country the season just gone. His performances in the 2010/11 season promoted interest from a number of big clubs in the Premier League, with Alex Ferguson rumoured to have been interested in bringing the player to Old Trafford.

It was Liverpool that secured his service though with then Director of Football Damien Comolli responsible for his signing with Kenny Dalglish back in charge of the club for a second time. Henderson was an exciting young prospect and wasn’t long before he established himself in the Reds starting XI, making over 30 league appearances in his first season at Anfield. He was made captain in June 2015 by manager Brendan Rodgers after Steven Gerrard departed the club.

Since he first appeared in a Liverpool shirt his role on the pitch has changed dramatically in a positional and tactical sense. He was bought originally as a box to box midfielder who could cover large areas of the pitch carrying out both offensive and defensive duties. He played numerous games on the right side of midfield also including Liverpool’s League Cup final victory in 2012. He has never been a prolific goal scorer or creator of goal’s but was more than adept at playing an attacking game.

As the tradition of having only two central midfielders was slowly phased out in the Premier League, Henderson saw his position on the pitch gradually regress and his defensive duties increase. It was Jurgen Klopp’s arrival that eventually cemented his place as a defensive midfielder. This is where some of some of the criticism of his performances began, mainly from sections of his own fans.

Sitting in front of a back four playing as a defensive shield isn’t the most glamourous of positions on the football pitch and it can also be one of the most thankless, as Henderson himself has found out over the last two seasons.

While not unique to English fans and the English game, players have to be seen to be moving the ball forward in the centre of the pitch and any pass sideways or backwards when it doesn’t look totally necessary often results in groans from the crowd. The idea that by keeping possession or slowing the play down, a team may be trying to coax the opposition out of position to create space for a certain type of move or run is often lost on the supporters.

The player that usually dictates the pace and controls the flow of the game is the defensive midfielder and for Liverpool that has mainly been Henderson since Klopp’s arrival. Some fans can appreciate the job he is doing is a tough one and usually he performs it admirably while some can’t. If he has an off day or puts in a bad performance then the criticism is amped up as some supporters cannot appreciate what he is contributing to the team in the first place.

Henderson is not infallible though and as good as he is as a footballer, their are plenty better than him out there. Klopp realised that Henderson’s position was one that needed strengthening last summer and prompted him to sign Fabinho from AS Monaco.

The versatile Brazilian can fulfil a number of roles across midfield and even play right back, but his best position is no doubt at the base of the midfield. His introduction to the Liverpool first team has been slow though and it has taken longer than expected for him to settle and come up to speed with the English game. The more he been involved so far this season the better he has looked. His range of passing and quick thinking under pressure is something that the team lacks with Henderson on the pitch and the build up play that fans often moan about is much faster.

Klopp has a big decision to make this summer as he looks to shuffle his starting XI once again for next season with more potential new signings on the way. This will probably involve removing Henderson from his role as the teams defensive midfielder in favour of Fabinho and this begs the question: will the captain keep his place in the starting line up or will he be dropped to the bench, like we have seen this season for numerous fixtures? All signs point to him spending more time on the bench and it wouldn’t be surprising if the captaincy was taken off him and given to Virgil Van Dijk on a full time basis.

Their is hope though for Henderson as we saw against Southampton he is still able to make a positive impact in an advanced role and is in no way a bad footballer. It’s just that circumstances have it that their are better players in the squad able to fulfil his role more capably.

We may see him in a more advanced position like when he arrived from Sunderland next season if Naby Keita doesn’t improve or Klopp focuses on strengthening other area’s of the squad.

One thing is for sure though , Henderson is a player that gives his all and will run all day, and that is something that Klopp values higher than anything else so we won’t be seeing him line out for another club as long as the German is in charge.