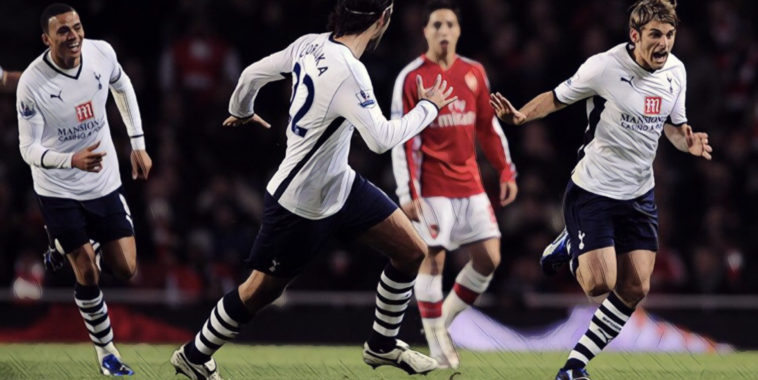 Always amongst the most eagerly anticipated fixtures on the Premier League calendar, Arsenal and Tottenham renew rivalries this weekend in what promises to be an enthralling north London derby.

The two teams have played out some incredible contests throughout the Premier League era, but perhaps none have been as drama-filled as the thrilling 4-4 draw between the sides in October 2008.

Harry Redknapp was taking charge of Spurs for the first time following his appointment as manager, his very first fixture resulting in a breathless game that saw the pendulum swing both ways before late, late drama saw the spoils shared.

David Bentley – who came through the academy system at Arsenal – opened the scoring with a stunning long-range strike from distance, an audacious dipping volley that left Manuel Almunia scrambling before hitting the back of the net.

Arsenal roared back to take charge of the game as goals from Mikael Silvestre, William Gallas and Emmanuel Adebayor put the home side in control either side of the break, only for Darren Bent to give the visitors hope.

Robin van Persie – superb all evening – rifled home a fourth which appeared to secure the result for Arsenal, only for Spurs to mount the most improbable of comebacks, late goals from Jermaine Jenas and Aaron Lennon, the equaliser coming with just seconds of stoppage time remaining, snatching the unlikeliest of points.

Ahead of this weekend’s crunch clash, whet your appetite with a rewind of this north London derby classic.