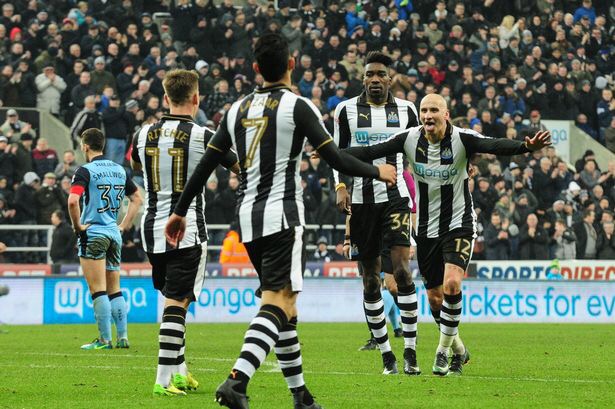 A terrific second half display from the Magpies saw the Toon Army return to the top spot.

On the back of two successive wins, Newcastle came into this fixture looking to reclaim the top spot against bottom of the table Rotherham, who were in search of their first away win all season. It was the home side who walked away victorious with a 4-0 win despite the visitor’s best efforts to contain the magpies in the first half.

Rafa Benitez had utilised the opportunities to rest many of his strongest assets during the midweek FA cup game, meaning that the majority of them had plenty of rest time approaching today. Matt Ritchie, DeAndre Yedlin, Yoan Gouffran and Jonjo Shelvey kept their place in the side. Daryl Murphy was granted his first league start following his transfer from Ipswich Town in the summer.

Rotherham’s caretaker manager Paul Warne said that his team would go down as legends if they managed to snatch a win. There were three changes to the side that beat Norwich last weekend, which included new signing Richard O’Donnell from Bristol City starting between the sticks.

In the opening two minutes of the game there were penalty appeals from the home supporters when Isaac Hayden tried to flick the ball past Aymen Belaid, only for the Tunisian to stick his hand out and prevent Newcastle from having a chance on goal. Fortunately for the team in blue colours, referee Jeremy Simpson waved on play.

The next clear cut chance in the game came roughly twenty minutes later when Daryl Murphy flicked the ball on to Ayoze Perez. The Spaniard found himself one on one with the keeper but he could not avert his shot from blazing over the crossbar.

With twenty minutes on the clock, the home fans were outraged with referee Jeremy Simpson as he over ruled a throw-in to the home team by awarding a free kick to Rotherham. Soon after arose the best chance of the half when

Newcastle goalkeeper Karl Darlow went from zero to hero in a matter of moments when he attempted to keep the ball in the box, however it slipped out of his hands and Anthony Forde had an open goal to aim at. DeAndre Yedlin raced over and stopped Forde from getting a shot on target. But Forde jumped back to his feet before the American and squared the ball across the box to Jerry Yates. Miraculously, Darlow got across and saved Yate’s shot. The ball then fell to the feet of Jon Taylor who smashed his effort high and wide. It was simply a world class save from the English shot-stopper.

In added time before half time, the home side eventually broke the resistance of the visitors when Jonjo Shelvey sent a long diagonal pass towards DeAndre Yedlin on the right flank. The full back played a first time ball to target man Daryl Murphy who, with his back to goal, spun the defender and smashed the ball into the top corner. It was just what the magpies deserved after their tenacity throughout the half.

In the second half, it was easy to say that the home team was brimming with confidence from their opening goal. Five minutes after the restart, Yoan Gouffran’s deflected shot was parried out by goalkeeper Richard O’Donnell into the path of Matt Ritchie who easily tapped the ball into the net. It looked like it was game over so early in the second period.

On the hour mark, Jamaal Lascelles received the ball on the half way line and lobbed the ball in behind the opposition defence where DeAndre Yedlin sprinted down the touchline and cut back a cross to the front post where Ayoze Perez met it and directed his effort into the net for 3-0. Replays show that Perez was lucky to have his goal stand because he used his hand to put the ball into the net.

At 3-0 down, Paul Warne decided to bring on his top goal scorer Danny Ward in a pursuit to find something from this match. Sammy Ameobi replaced Yoan Gouffran to make his return to St James’ Park after spending a period of time out on loan to Bolton Wanderers. As he stepped onto the pitch there was a roar from the entirety of the stadium and when play was resumed he took on a man before passing the ball back into the midfield.

The introduction of Danny Ward was important for the away side as he made an instant impact by curling the ball past Karl Darlow but also past the post; a narrow miss from the player who could be departing the club in the coming weeks.

With approximately thirteen minutes left to play, a counter attack emerged for the Geordies as Jonjo Shelvey played in Matt Ritchie who finished the move with a fine finish. The Scotland international is now in double figures for the season and continues to show that he was worth the £12 million that the club payed for him in the summer.

In all fairness, it was a deserved win for Newcastle who displayed a much improved second half performance and puts them back in front of Brighton at the top of the league. As for Rotherham, they stay rock bottom of the division and need to start putting together a sequence of good results in order to avoid the drop back down to the third tier.

Woah! I’m really loving the template/theme of this site.
It’s simple, yet effective. A lot of times it’s difficult to get that “perfect balance” between superb usability and visual
appeal. I must say you have done a fantastic job with this.
Additionally, the blog loads very fast for me on Internet explorer.
Outstanding Blog!