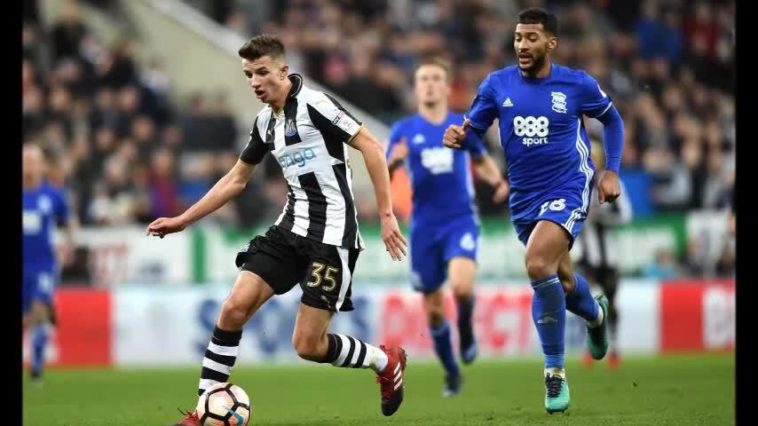 After Newcastle luckily scraped a 1-2 victory over Brentford last time out, they were eager to display a more promising performance in this FA Cup replay, and did so by coming away with a 3-1 win in a game where they dominated and limited Birmingham’s chances during the game.

It would not be an easy affair for Rafa Benitez’ side as they were struck with injury problems to some of their key first team players from the weekends fixture with Brentford, as well still being without Chancel Mbemba, Christian Atsu and Mo Diame who are away at the African Cup of Nations.

Dwight Gayle and Vurnon Anita were ruled out of action whilst Isaac Hayden dropped to the bench as a precaution, so he would not aggravate a further injury to his groin. Benitez opted to look upon the youth system as Yasin Ben El Mhanni, Stuart Findlay and Daniel Barlaser made their first team debuts following their impressive recent performances in the Under 23 squad. It was a rotated line-up for Newcastle as eight changes were made from their last game, one of them being Jonjo Shelvey who came back into the team after completing his five match suspension.

Despite manager Gianfranco Zola revealing that he rates the FA Cup highly in a pre-match interview, the Italian also rested many players from their last outing, which was a 0-0 draw against Nottingham Forest, making six changes in total. 30 year old defender Jonathan Spector made the bench with speculation about him departing the club for the MLS in America in the very near future. The blues were still searching of their first win under Zola after taking over previous boss Gary Rowett.

The match got off to a fantastic start for Newcastle as the creative spark of Jonjo Shelvey found Frenchman Yoan Gouffran with a through ball which split the Birmingham’s defence. Gouffran, who was playing as a striker for the first time under Rafael Benitez, rounded goalkeeper Adam Legzdins before being fouled by the Englishman. Referee Lee Probert did not need to think twice about pointing to the spot; it was the worst possible start that the blues could have wished for. Winger Matt Ritchie stepped up and confidently placed the ball on the penalty spot and after a brief pause, the Scotland international stepped up and converted the spot kick, slotting the ball straight down the middle.

As the clock ticked on in the first half, Newcastle came into the game more and more as the minutes went on and put together numerous passing moves around the pitch of St James’. A rare attack occurred for Zola’s men and they were awarded with a free kick on the edge of the box. Welshman David Cotterill stood over the set piece as if he was Cristiano Ronaldo, however his attempt could only find the side netting. The Geordies then crafted another attack when left back Achraf Lazaar put in an inviting cross for Yoan Gouffran who flicked the ball narrowly wide. Soon after it was that man again in the action, Gouffran was on the end of Shelvey’s direct free kick, he then followed this up by taking the ball out of the air and turning two defenders before hitting the back of the net. The players in black and white were not prepared to take their foot of the pedal because Matt Ritchie created another chance as he cut inside onto his favourite left foot and curled a shot off the post, Daniel Barlaser then met the follow up but he dragged his shot wide.

In the second half, Gianfranco Zola’s team talk and the inclusion of the substitutes Lukas Jutkiewicz and Reece Brown payed off as Birmingham came out with a totally different show. The ball fell into the feet of David Cotterill and he made use of his chance as he found his strike in the net. They came close again with Lukas Jutkiewicz towering above Cheick Tiote and directing his just over the crossbar. Two minutes into the four of added time, Jonjo Shelvey put in a low cross to Matt Ritchie, who grabbed his eighth goal since joining from AFC Bournemouth in the summer, finished into an open goal.

The magpies went home with the win and advanced into the next round of the Fa Cup where they will fancy their chances against League One opposition, Oxford United.

This article was written by our Guest writer, Jake Pattison from Newcastle, who will be covering all things Newcastle for us at Football Faithful.