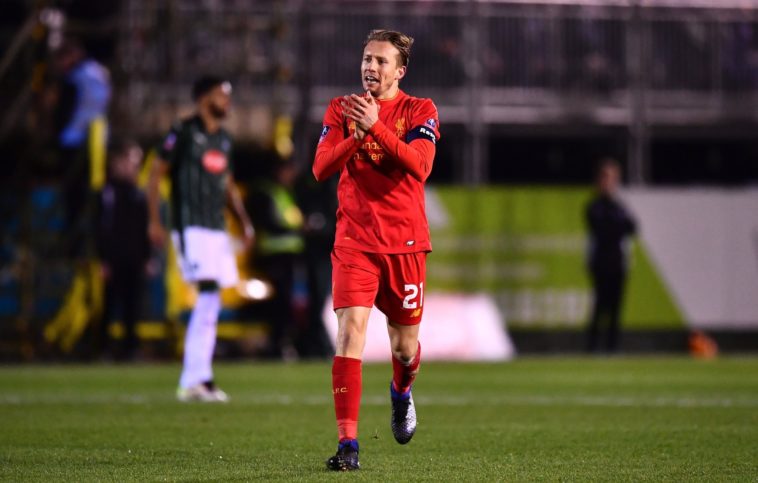 Despite dropping out of the FA Cup, last night very much belonged to Plymouth Argyle as they played host to Liverpool for the replay of their earlier goalless draw. Over 17,000 fans packed into Home Park last night to witness a one nil win for Jurgen Klopp’s youngsters, however it didn’t come easily. Argyle certainly showed they were no pushover, Plymouth also showed they deserve to be playing in a higher league than they currently are.

Argyle played this first half very differently to the first half at Anfield. Dangerous, direct and daring. Paul-Arnold Garita caused a great deal of problems amongst the Liverpool back four, whilst Jervis and Slew attempted to pin the full backs as far back as possible and get service to their target man.

The first real break through came in the 15th minute when a long ball put Oscar Threlkeld on the backfoot against Sturridge who broke into the box, and after a neat chop inside, found himself on the floor after a blatant trip. However to Argyle’s luck and relief, the ref waved play on and Argyle lived to die another day. Although four minutes later and the Liverpool pressure had continued, Coutinho the Brazilian magician stood over a corner which was eventually met by fellow countryman, Lucas Leiva who nodded home for his first goal in seven years. It took Liverpool 105 minutes to finally break through against the South coast club but Plymouth’s spirit was in no way dampened and their fans continued in their fantastic voice. Just a minute later playmaker Graham Carey probed forward and found himself in enough space to unleash a real dipper for Karius to deal with, and fellow central midfielder nearly followed up on Karius’ spill however the Red’s defence stayed firm.

Plymouth Argyle continued their positive pressure and were very nearly rewarded ten minutes later when Oscar Threlkeld poked it past Lucas, took the ball to the touchline only for his cross to be fantastically dealt with by Alexander-Arnold. If not, Garita would surely have tucked home an equaliser.

As the first half drew to a close, Argyle went knocking again. This time David Fox took control of the midfield and drove them forward however a lapse of concentration from Slew led the ball out of control and Liverpool saw the first half through at one nil.

One of Liverpool’s younger players, Ejaria, seemed to be committing fouls all night and was finally reprimanded by the referee after his third bad challenge of Jake Jervis in the 51st minute.

Liverpool had been soaking up pressure for a while and another chance fell to Sturridge when Lucas looped a delightful ball over the top, Sturridge had peeled off from Ben Purrington however Daniel’s shot dribbled wide after poor execution. Minutes later Argyle had a corner thanks to the movement and pace of winger Slew, Garita challenged Karius who spilt the ball but Garita clipped over and Karius was deemed to have been fouled in the build up anyway.

Coutinho had a relatively quiet game and was brought off for Harry Wilson in the 65th minute, just four minutes later Harry Wilson thought he had scored when he charged down a Luke McCormick backpass, luckily Luke had cleared the ball with such venom, it bounced back over the goal and he gained a second bite and the goal kick cherry.

By the 75th minute it seemed to be all Argyle, they were hungry for a goal. Fox knocked a freekick from his own half into the Liverpool box, aimed at defender Bradley who won it and nodded it towards Jervis who acrobatically struck the post. Many Argyle fans were convinced this was in, this seems to have turned out to be labelled as ‘the’ chance.

Argyle pressure built up from then on, however ten minutes later, Liverpool substitute Ojo played a throughball to left back Moreno who was sliced down with a clumsy challenge by Yann Songo’o and the ref felt no other chance other than to give a penalty. Divock Origi, who’d had a quiet night, stepped up for the spot kick but ‘Super Luke’ held the poorly placed penalty with ease. Yann had been let off. Argyle had a lifeline.

But after bringing off Garita in the 72nd minute, Argyle had seemed to have lost a way out and Liverpool began to bring it forward for the finally few minutes. Origi did well to hold off Sonny Bradley and turn to get a shot off but fired too high.

This turned out to be the last chance of the game and Liverpool had come out victorious on this cold Wednesday night in Plymouth. But, as I said at the start, there was no doubt who this night belonged to. They didn’t stop singing all night, at Anfield at Home Park and the amount of pride on show for this football club baffled football fans around the nation.

Plymouth Argyle have not only done a city proud, but it seems a nation.