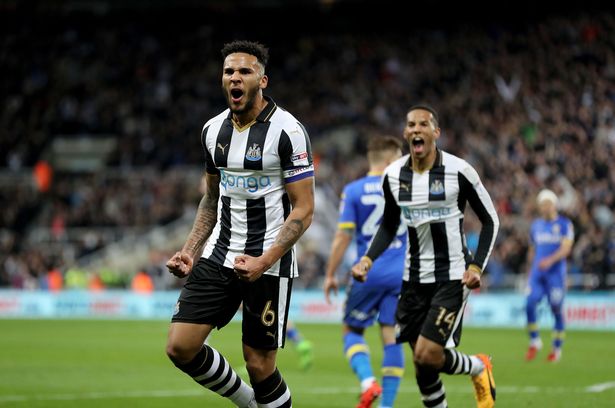 Newcastle were on the wrong end of late drama when they conceded a last minute equaliser against Leeds United in arguably their best performance of the season.

The 1-1 draw, coupled with subsequent results on Easter Monday, have all but ended Newcastle’s title hopes with three games remaining as Brighton lead by seven points. Brighton have since sealed their promotion to the Premier League.

Leeds threatened in the early stages when Alfonso Pedraza’s speculative effort from the edge of the box rattled against the crossbar before Karl Darlow acrobatically cleared the danger.

From there on in the first half Leeds did not look a side that occupied fourth position as they were dominated by Newcastle. The Leagues top scorer, Chris Wood, did not make an impact at all.

The hosts were pressing for the breakthrough but could not find a way past the centre back partnership of Kyle Bartley and Pontus Jansson.

Newcastle then connected with the crossbar themselves when Yoan Gouffran intercepted Pablo Hernandez’ attempted pass. He shrugged off Hernandez before hitting a low drilled shot off the post which was inches away from crossing the line.

The end of the first half brought a succession of corners for Rafa Benitez’ team. Rob Green saved Chancel Mbemba’s bullet header following Jonjo Shelvey’s corner. It would have been Mbemba’s first ever goal for Newcastle.

Next Matt Ritchie’s left footed corner dropped to the back post where there was a goalmouth scramble. The ball eventually fell to Ayoze Perez who could not adjust his feet in time and fired over the bar.

Newcastle continued to dominate and half way through the second period came the deserved goal. Gouffran floated in a ball to Mitrovic’ at the far post who then headed the ball across goal to the awaiting Jamaal Lascelles. The skipper nodded the ball home and paused for confirmation from the referee that the ball had crossed the line. The persistency finally payed off and Newcastle were given their reward.

Perez then came close when he volleyed the ball from a couple of yards out but his effort was well saved by Rob Green.

Newcastle were agonisingly close to collecting all three points, but in stoppage time Leeds equalised. A quick counter attack up the field saw Kemar Roofe’s cross converted past Karl Darlow by Chris Wood, who scored his 25th league goal of the season. It turned out to be practically the last kick off the game.

It turned out to be a huge blow for Newcastle in their aim for the league title as Brighton managed to win 0-3 in the earlier kick off.