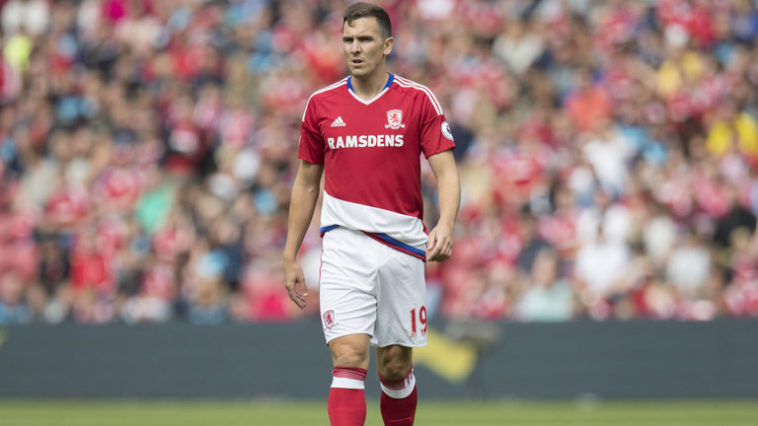 Middlesbrough winger Stewart Downing has been informed by new boss Garry Monk he has no future at The Riverside.

Sky Sports’ man in the know in the North East, Keith Downie, tweeted this afternoon that the 32-year-old has been told he can leave this summer.

Local lad Downing returned for his second spell at Boro for the 2015/16 season, helping his hometown club to promotion.

Often reported locally as one of the members of the squad to have been involved in the Aitor Karanka walk out during that campaign, his presence at Boro has caused constant division among the clubs supporters.

Despite his past achievements with Boro and the fact he’s born and bred in the area, it’s not stopped him from coming in for some fierce criticism regarding his attitude, as well as what many fans have considered to be lacklustre performances during the period of his second stint at the club.

He made his debut for the club back in 2002, three months shy of his 18th birthday having progressed through the ranks at Middlesbrough. Following a short stint on loan at local rivals Sunderland, Downing went on to become a regular fixture in the squad from 2004, but was left out of the starting eleven that won the League Cup that year.

However, he started to show his true potential in the following seasons, shining in the clubs European campaigns, the second of which resulted in a UEFA Cup final appearance. He was part of the team that also recorded Boro’s highest ever Premier League finish of 7th in the 2005/06 season.

Following Middlesbrough’s relegation in 2009, a big money move to Aston Villa saw him make an instant return the top flight. After two impressive seasons in the Midlands Liverpool came calling, securing his signature for £20m.

An indifferent time on Merseyside followed, where he never really hit the heights expected. A fall out with manager Brendan Rodgers over lack of playing time the low point in a two season stint that often saw him deployed as a left-wing back, a position he openly acknowledged not to like.

Arguably some of the best of football of his career came at West Ham, where a move in 2013 for £5m saw him deployed mainly in the ‘No.10’ role. He ended the 2014/15 season as one of the top ranking midfielders in the Premier League, but with Sam Allardcye on the move Boro came calling, and the emotional pull of home proved too strong as he dropped down a division. Signing for a fee rising to £7m he went on to help Boro achieve promotion back to the top flight after seven seasons in the Championship.

Despite getting off to a good start last season he eventually found himself out of favour amid rumours of a fall out with Aitor Karanka, where it was reported he was told he could leave on loan during the January Transfer Window. Following Karanka’s sacking, Downing returned to the fold under Caretaker boss Steve Agnew, featuring regularly as Boro slipped out of the league after just one season.

It now appears the 35 cap former England international has become surplus to requirements. With Monk looking to make changes, the willingness to let go a high profile name in Downing shows the new Boro boss isn’t one to shirk a big decision.